that you are literally making an inanimate object sing.

Love this quote! Thanks! 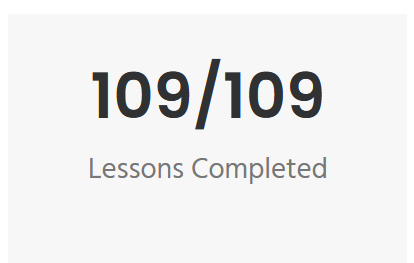 Took me 96 or 97 days from starting the first module to finish the course, but let’s say it was the former because it sounds nicer. (Edit: can’t believe I screwed up the numbers, it was a bit over three months, not two).

Had some course fatigue near the end, though I’m not sure if it’s just my general mood being a bit crap lately. But anyway, it’s great to have finished this. It just happened that a bass I had been waiting for arrived to my local music shop some days ago, and I’m gonna go try it out.

I’ll have to catch up on the 50 songs challenge, and go review some of the course lessons I did not nail completely or are otherwise worth revisiting. Not sure in which order.

Congrats @kowry!
well done!
Please do join in on the 50s100c, the more the merrier.

Congrats @kowry,
That was a good fast pace. Always good to revisit the ones you couldn’t get thru the Medium and Fast workout, until you can, but its good you are not letting it stop you. Keep that as a side note, just don’t forget.

I somehow screwed up the numbers in my graduation post

Congratulations on finishing (no matter how fast)!

Time does not matter, if it were a race, I would give back my trophy, to a child with cancer.

3 months, or just over, and even 4 months, seems to be way ahead of the curve, some take a year or more, and it doesn’t matter.
We started at different slkill levels, and by the time we were done, putting in the work and absorbing all of Josh’s knowledge is what is important. If you get it in a month, great, a week, great, 2 months, great, 3,4,5,6 months, AWESOME, 9 months, or a year, PERFECT.

The idea of the course, and with @JoshFossgreen great structure and teaching style, if we take 10 players.

You see, if you take all those people, and the first did it in a week an cold do most of the hard workoust, and all the medium

WE all go at different paces, but we took the same path and tested out as badasses.
if we could have person 4 that took a year start, then at 4 months pop in the 3rd person, and 1/2 month later, put person 5, then at 9 months in, you can add person 2, and then at week 51, we could add person 1.

Some go fast, others slow, but if we all showed up to a jam session right after we all finished the course, aside from people that worked outside the course, alongside with the course, the average graduate, will be at the same level with the same, having learned and practiced the same things.

Just trying to show for anybody thinking they are taking too long, they not, they are doing it THEIR PERFECT Speed, and they should not think they will be worse then persons that did it in half the time… In fact, if they committed more of the course to memory, they could be ahead of those that sped thru.

We know the goal, it is a personal trip there, some go fast, others slow, but its the SAME FINISH LINE we all cross, and there are no cookies if you get there first.

It took me a year and I have no regrets. The key is not how quickly you finish the course, the key is how often you pick up your bass. And the key to that is enjoying playing the bass. For me, I sometimes just want to mess around on the bass and not be doing lessons. Or maybe want to try to learn a cover. There is nothing wrong with that. If you ever get stuck in a part of the course, just pause it there and have some fun on the bass doing other stuff until you want to go back to it. Or skip that lesson and try a different one. Find what is right for you.

For example, I spend about 1/3rd on theory/technique/course, 1/3rd on covers, and a 1/3rd on improv/songwriting. This doesn’t necessarily mean I split up each session. I might do a day just on improv and maybe a day just on theory for example. But I try my best to play everyday, even if it is just for 15 minutes (though I always play longer than what I intended!).

And as I’ve said many times elsewhere, the best learning experience (in my opinion) is to play with others. Think of learning bass as learning a language. We all know the best way to learn a language is to live in the country where everyone is speaking that language and have a trial by fire. That is what playing with others is like. And we’re in luck on that. Bassists are always in demand. I know it can be intimidating, but it really does help with learning and with motivation. Not essential of course, but recommended. Just don’t sign-up to a Muse or Jamiroquai cover band if you are a beginner.

It took me longer than I had originally planned because after a couple modules of B2B, I started taking the TalkingBass Scale Essentials course at the same time (sort of like back in college when I attended various classes each day).
I became so hooked on the Scales course, I found myself spending more time on it, and finished it about a week before I finished B2B.
As @JT pointed it out, it’s not about how long it takes, it’s more about how often you pick up your bass.

Got through the Slap module yesterday, that one took me the longest by far. Slap is definitely hard but not impossible. I just need to keep working at it.