Can someone please explain to me why so many people on the forum block their location from showing in their profile.

It’s not required to fill in the location when creating the profile. I took a look now and I simply don’t have it filled in. Not for any specific reason other than it’s not mandatory. (And that’s how I tend to behave on the internet in general)

Funny, I never even thought of it until you mentioned it. I just checked and see that I did fill in my location. But as @wellbi pointed out, it’s not mandatory so I guess many people just don’t fill it in. I just assume they are from Earth.

It’s a public forum accessible by anyone, not just B2B members. You don’t even need to register to read these posts.

I tend to try and limit the information I throw out into the open. You’d be surprised how easy it is to piece together personal information from multiple sources and then abuse it.

I also added my Credit Card details to my profile. If anyone’s interested. I trust you guys/ girls.

I also added my Credit Card details to my profile.

You forgot to fill in the card security code.

I am really disappointed by the level of your trust.

You forgot to fill in the card security code.

I am really disappointed by the level of your trust.

I asked @Bassbot to do a quick background check on forum members accessing my profile. If the Keywords - GAS and Sweetwater appeared in your user history it blocked it.

Hi! To find out what I can do, say @bassbot display help. 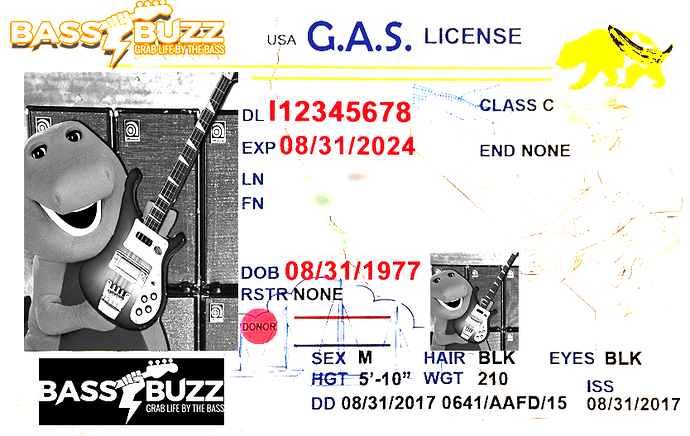 just to let you know, I am a hacker … I bypassed this bassbot secret vault months ago . …

Someone stole my identity a couple years ago. After a few days, he offered me $500 if I would please take it back. I held out and ended up making $1,000.

@wellbi Holy crap! That is Awesome! This needs something bigger than a “Like”.

This is amazing. I love the little banana detail / Easter egg.

Thanks. It isn’t complete, because during the editing I was like “Isn’t it like for a retarded 14 yo?” … and I scrapped quite a lot of things and just quickly finished it. BaSS CouNTeR column instead of the lower Bassbuzz logo, instead of California bear there should be Bass (the fish) with the Bassbuzz “bass hand” logo instead of the star. The little ID photo should be the Velvet Underground and Nico “banana” album cover and the data on the card should be modified to be more bass-related, the font in general, etc.

If there’re actually some people who would like to create their own GAS license. I could try to finish it and prepare a little tutorial for the GAS license edit with some freeware software. (I am using Photoshop, but I could prepare a layer file in GIMP or something, and all to do there would be to change the data on the card and import/position own photo.)

There used to be times when I could code some kind of generator that would generate the card from an uploaded picture and submitted form data. But I am really long away from web development, so it would take too much time.

If there’s any interest, I will try to prepare it. No promises, don’t know when.

There are 13 replies to my OP and only the first three have anything to do with the topic.
Amazing how some people have a knack for driving things off topic and then perpetuating it without contributing anything.
I thought I was on the Talking Bass Forum.

Did we not adequately answer your question? Sorry if we didn’t.

Can someone please explain to me why so many people on the forum block their location from showing in their profile.

Because it defeats the purpose of the witness protection program.

I think we are contributing humour / levity and after the past year or so I’m ok with a little irreverence.

YMMV depending how serious you are. I think all the technical questions that are asked are answered politely and proficiently.

I’m never in one place long enough to have a location.