So. I think my new G&L has a grounding issue. Plugged in with the amp on, it is VERY buzzy. More so than just regular single-coil pickup noise. When I touch the strings or the bridge, the buzz goes away. My understanding is that’s a grounding issue.

Here’s a picture of the electronics cavity: 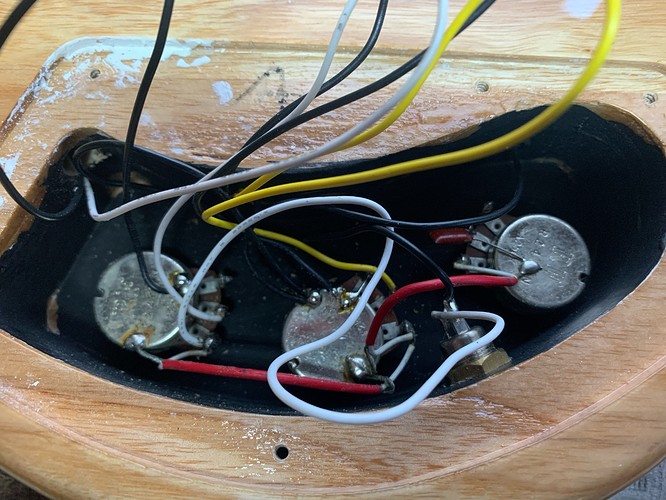 Hopefully, someone here with better eyes than I’ve got can confirm that.

What’s connected to the top post of the tone pot? Can’t see anything.

Hard to tell but looks like the bridge ground is connected to the middle pot, is that correct?

I don’t see anything too obvious. Are all the connections solid?

That’s an awful lot of wire for factory pickups. Wonder if they were replaced.

It looks like the red insulation contains a white and a bare ground wire. Do you have a multimeter to check continuity?

It could just be 60 cycle hum. Use a multimeter to run a continuity test between the pots and the bridge to make sure your bridge and strings are grounded properly.

I’m assuming that as well.

Wonder if they were replaced.

The bass was BRAND NEW. It still had all the plastic on the pickups and electronics cavity cover. It was removed from the box to tune and photograph. So, doubtful. Possible, because I don’t know what happened to it before I got it, but not probable I don’t think.

What’s connected to the top post of the tone pot?

So, I found this on the bassesbyleo.com site: 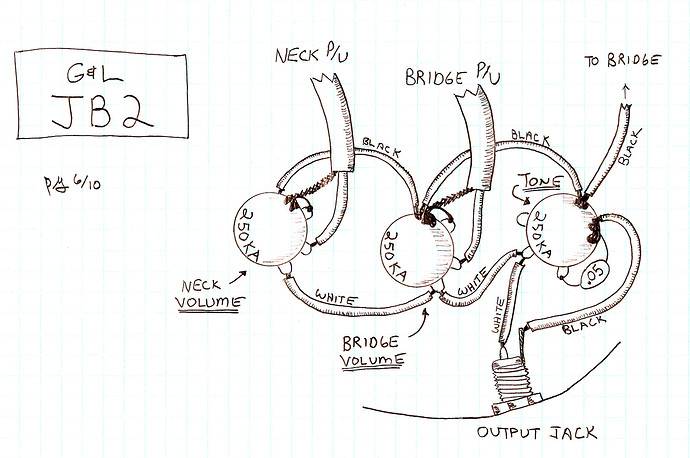 It’s supposed to be the wiring diagram for this model as drawn by Paul Gagon, who worked directly with Leo Fender on these instruments. But yeah, that does seem to be a lot of wiring.

It looks like the black and white coming in in the upper left are from the neck pickup. The yellow and black coming in from between the first and second pots are from the bridge pickup. The white and yellow from the pickups go to the middle post on the two volume pots. So that matches up, I suppose.

And, in fucking with this, the black wire coming in from the bridge pickup broke off. I think that it was not soldered properly.

So I’ve got two issues that I can see:

I know I’ll have to fix the bridge pickup ground. Should I change the black wire going to the bridge to hit all three pots as shown in the drawing?

Do you have a multimeter to check continuity?

Sadly, I don’t. I’m going to have to pick one up now, though, to check my work. Plus, it’d be good to have. My son might have one, though, I’ll have to check with him.

It could just be 60 cycle hum.

I don’t think it is. It’s a definite electrical buzzing, which is different from the 60 cycle hum I get on my other single coil bass. Plus, I don’t think 60 cycle hum cuts out when you touch the strings or bridge, does it?

After looking closer, the red wire has both white (hot) and unshielded wire (ground) inside of it. That does not look like factory work to me. That is the worst “factory” wiring I’ve ever seen. Either a late Friday afternoon bass, or someone had their dirty paws in there before you bought it.

Every guitar / bass I’ve opened up has black as the ground wire. @RuknRole is right I think someone might have wired that bass and quit the same shift. Sorry.

someone had their dirty paws in there before you bought it.

I don’t think that’s the issue. I’ve confirmed with the music store I got it from that it was brand new. And if you look at the original drawing, the ground has to be the black wire going out to the bridge, which is black in my bass (it’s just missing a pot or two). But it’s the only thing connecting the bridge to the shield of the jack. That red wire in the picture isn’t doing that.

Every guitar / bass I’ve opened up has black as the ground wire.

I’m pretty sure this one does too. It comes in to the cavity from the bridge, goes to the bridge volume pot, and then to the shield on the jack. I really don’t think that the red wire is the ground.

What you’re seeing as the red wire, when looking at the original drawing, is the line that takes the output from the pots to the jack;

The red wire has both hot and ground in it Your pots look to be grounded correctly, just not using separate wires as shown in the diagram.

The red wire has both hot and ground in it.

This what I see too.

I think I see the black ground wire going from the output jack to the shielding paint in the cavity?
It looks like the red wire has two wires (like @RuknRole stated) one of which appears to be an unshielded ground.
So if the unshielded wire connects the three pots. Then where does that go to ground?

The wires are so long it’s hard to tell we’re there going. I think the pots are doubled grounded, via black wires and via red wire. I’m willing to bet a dollar that red wire is not from factory.

I think I see the black ground wire going from the output jack to the shielding paint in the cavity?

No, it’s going from the Jack to the middle pot, then put to the bridge.

Then where does that go to ground?

It doesn’t, because I don’t think that’s ground. Ground is black, but it was wired wrong. It isn’t hitting all the pots like it shows in the original drawing. I think that’s the problem.

It isn’t hitting all the pots like it shows in the original drawing. I think that’s the problem.

Tim, from what I see in the picture, your pots are grounded properly via the ground wire inside the red shielding.
Take it back to the store and let them check it . Maybe even compare it to another bass and see if it looks the same.
What model is it?

Your issue is the bridge ground wire.

That diagram is the diagram for every PJ /JJ standard bass with vol vol tone. The sketchiness of factory wiring is fine, just not how I’d do it. I’ve actually seen cheesier from factory wiring on more $$ instruments.

Agree. Take it back and stand there while they fix the bridge ground and let them check all the rest. It’s a new bass.

Btw - I was sold a “new” albeit “ new old stock” bass that i swear wasn’t new from the wiring but the store swears up and down it was new.

Good help is hard to find in the soldering department apparently.

Ok I saw it was a JB2. I found a wiring picture on Talkbass. Looks like the red might be from factory. Guess I owe somebody a dollar. Lol
That one has green and dual grey wire as well. Some clown wiring going on at the factory if you ask me. 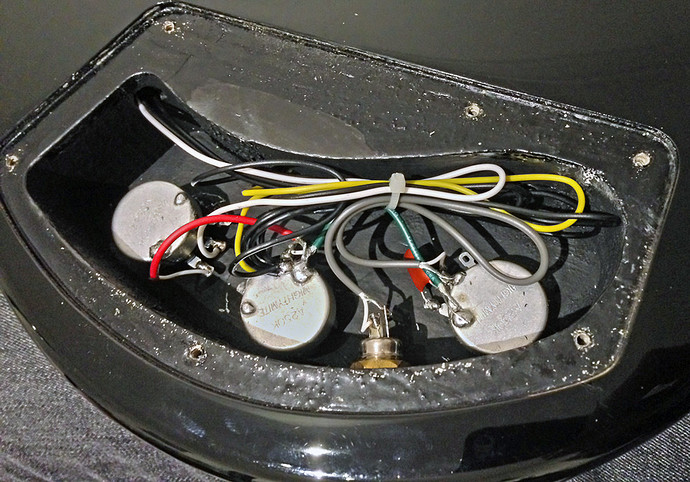 To me it’s either a bad contact from ground wire to the bridge (bad solder joint that broke) or under the bridge ( its usually just sandwiched between bridge and body), or bad 60 cycle hum.