Welcome to the forums @weedhopper

Thanks! Been having a blast so far!

I am Michael and I live in San Francisco. I recently found myself looking for creative outlet and when I really young (pre-teen), I played the bass for a few weeks. So around Thanksgiving, I bought an acoustic bass on Amazon and got hooked. So much so I now own two electric basses and two amps as well. Am having a blast and have learned so much already I can’t see myself ever giving it up…

Hey @PandaJoe! I’m a bagpiper too! I’m inviting you to the bagpiper chat now…

Automatically, you are awarded the ‘Cool Dad Card’.

Well, here we are. I’m Chris from San Diego. I’m 38, and I’ve owned a bass for almost 20 years, messing around with some TABs back in the early 00s and that’s as far as I ever got. Actually, at one point I had to trade in my amp for rent money and that pretty much put an end to it. I was maybe 20 at the time. It’s an Oscar Schmidt (Washburn’s low-end range). 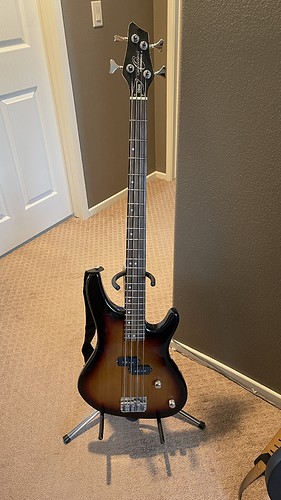 To be honest, I actually started getting interested in bass again from watching Davie504 on YouTube. Originally because I thought he was funny, but it definitely got me interested in the instrument again. I ended up picking up a Glarry Jazz Bass from Amazon for $80 based on the surprisingly good reviews on YouTube, and also did a ton of research and YouTube video watching on how to set it up and even clean up the frets. Looking at my old bass… wow, it really needs a setup too. 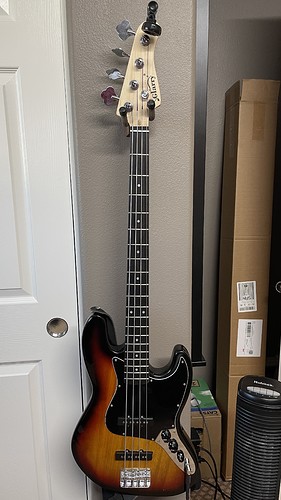 Initially I thought I could get by using a Focusrite and my laptop to practice, but it’s more of a hassle and not really good for quickly picking up the instrument and practicing. Though it’s really fun to play with all the effects! After watching a ton of Bass Buzz videos, I have a Fender Rumble 40 on the way and should arrive tomorrow. I had initially signed up for Fender’s courses online, but after watching all the Bass Buzz videos on YouTube I decided that they were much more interesting and fun. I didn’t make it far in the Fender series just because of how dry it was.

I just signed up for the BassBuzz course!

Welcome aboard to both the course and the Forums, @IPv6Freely . . .

We hope you enjoy both!

Welcome aboard @IPv6Freely,
You made the right choice regarding learning the bass, Josh’s course will keep you moving in a forward direction, keep you motivated to continue because he makes it fun, not a chore which is really important when trying to learn something new.
As he says don’t get bogged down, move on and come back, you always have access to go over all areas when you forget something or want to refresh😎
Enjoy the ride,
Cheers Brian

My name is Jeffrey B, and I am an audiophile that decided to try my hand at the production side of things and spread my wings a little with music. Big into desktop systems (although I do have some maggies in storage right now), so if you have any questions on gear feel free to message me. Hoping to post some info on the forums in the coming days for everyone.

Starting off with a Yamaha TRBX and Hartke amp for practice.

Welcome to the community @IPv6Freely and @three23!

Welcome @IPv6Freely - I’m a member of Fender Play also - kinda faded out of that and switched to B2B - you’ll enjoy it. I don’t hate Play, but I get way more out of B2B…

Hi! I’m Diana, and I’m new to BassBuzz. I’ve been enjoying Josh’s Youtube videos, and finally purchased the course. Yay! I have been around the edges of music my whole life, playing an instrument occasionally, but never seriously.

My awesome (guitarist) ex bought me two Ibanez 3/4 basses, (my hands are just not able to do a full size bass yet.) I’ve been learning on my own and have some blues tunes figured out. I can play Green Onions and Killing Floor, (the Howlin’ Wolf version, of course!) Now it’s time to get serious, or actually… time to get better and have even more fun.