Lets Talk “Motown”! Who Has The Bug?

There were SO many great Motown tunes they used to play at HS dances etc.

Hope the old ticker “keeps on thumpin”, too!

Yes, @Lanny, I meant to say something along those lines. Hope all is as it should be.

@Jazzbass19 - Hahaha - Yea, me too Joe!! Gotta say that it does feel a little “odd” at times but I guess it’s just something a person learns to get use to after awhile… As a matter of fact, today was the first day in two weeks that I was able to strap on the Ibanez 500E and play standing up! That was another reason I bought that particular bass just before my surgery - the weight… I tried hanging the Yamaha 304 off my shoulder and could instantly tell the weight difference. Gonna need a bit more time for the incision to heal before I go hanging any more weight on it though… In the meantime, “Ol Thumper” (that’s what I named it) is doing a pretty good job at keeping the beat!!

Yes,… Hope all is as it should be.

@PeteP - So far so good!! Actually got to wash my own hair today! I’m sure my wife is happy since she no longer has to put up with my sarcastic humor and colorful puns when she was washing it for me!!

Actually got to wash my own hair today!

I’ve had my share of invalid time and relying on others for even minor activities, so I get what a big deal that can actually me. I’m impressed that you’re back on the bass before you’ve got your personal grooming skills back. Truly badass.

I highly recommend the documentary Standing In The Shadows Of Motown.

I loooooooove Motown bass playing. This was my most recent Jamerson transcription:

And welcome to the forum @Jessica, I recognize you from the Youtube comments! Feel free to Introduce Yourself! when you get a chance!

Both Standing In The Shadows Of Motown and Soul Fingers (about Duck Dunn) are on my reading list.

I’m impressed that you’re back on the bass before you’ve got your personal grooming skills back. Truly badass.

Good luck! As someone who has had two surgeries on each shoulder (though none in the last four years), don’t ever stop doing the rehab exercises. Other than playing the bass, those will be the most valuable 15-20 minutes of your day.

That @gipsj is exactly why I’m healing quite well. I learned years ago when I went through knee surgery… playing my bass is more of a “mental” exercise for me and helps to keep my spirits high and my head clear…

@Lanny Funny about the timing of this thread…

Today, I tuned to AXS TV to see what was on. If you’re not familiar with AXS TV, it’s a station that is dedicated to music. Most of the time you can find a concert or a documentary about a band. Today when I tuned in, there was a concert by Phil Collins in which he dedicated an hour performance to nothing but MoTown. He no longer plays the drums due to his health issues, but he’s a great lead singer. Behind him, a full orchestra; with brass, winds, Xphone, keys, percussionists, guitars, a chorus, and a great bass player. They played every MoTown song I can think of, and it was awesome!
Now, I’ve really got that MoTown Jones going! Damn, I’m going to have to find a MoTown cover band to play with!

If you’re not familiar with AXS TV, it’s a station that is dedicated to music.

I LOVE AXS TV @PamPurrs!! My wife records a lot of it to the Hopper for me since I’m always spending most of my time either outside on our property or inside in my music room. I haven’t seen the Phil Collins documentary yet, but I’ll most definitely have Connie out that one on radar for recording!!

I’m so jazzed that you’ve got the ‘MoTown’ bug! I just know that that ‘Red Rose 5 String’ could thump out some killer Motown groove once you get her all warmed up!! The Motown era was a great time in music history that we both were fortunate enough to live through and (see/hear) first hand… It kinda made us all who we are today…

YES!! Look what got delivered today… Once I finish up a couple covers I’m currently working on, it’ll be time to regroup and thump out some Motown tunes! 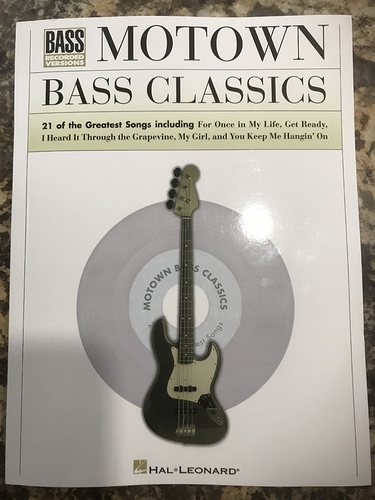 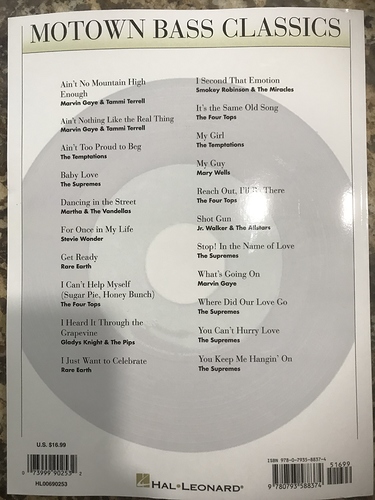 Yes to this book and movie.

The book was my sight-reading/mind-exploding ritual for a good while. I had panned all of these songs and this whole style because it wasn’t metal (I didn’t have really big ears as a junior high / high school kid, OK?).

These two things (book and movie) showed me what I’d been missing, and now all I want to play are Jamerson bass lines. He’s the best.

My dad used to take me to a MC flat track. The bar/grill there had a juke box I’d like to have. But it seemed like every time I went in Mr. Big Stuff was always playing…can’t get that out of my head

But it seemed like every time I went in Mr. Big Stuff was always playing

Wow! Good memories @rt66az! A great R&B/Southern Soul hit by Jean Knight recorded in Jackson Mississippi under the STAX label out of Memphis Tennessee. Actually, STAX’s main rival in the music label industry during the time was none other than Detroit’s MOTOWN Records.

Mr Big Stuff is known for it’s two beat off beat bass line (Syncopation) that @JoshFossgreen teaches in one if the modules in his B2B course.

So I started working on another Jamerson tune a couple days ago and realized that the only way that I can come anywhere close to replicating his sound was to modify (raise just a slight amount) the Babitz bridge settings on my passive PJ pickup Yamaha 174. Still had to stuff a thick strip of sponge packing material under the strings though. 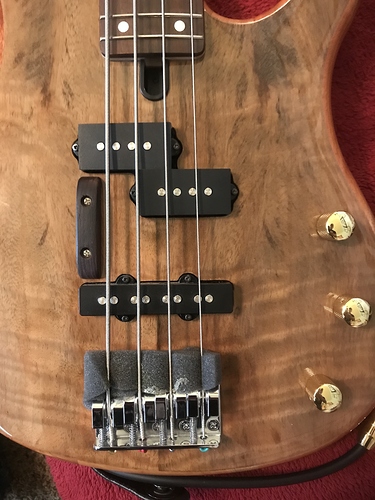 I figure that back then, the old bassists really never changed their strings as much as we do now a days (probably couldn’t afford it), and I’m not sure active bass’s were around so raising the action on their old half worn out strings may have been the only way for them to get the amplitude (along with the somewhat dark tones) out of those worn out old strings on an old passive electric bass anyway. (Just a thought??)

Not only did I find that neither my Yamaha TRBX304 or my Ibanez SR500 would come close to not only reproducing the tones I was looking for, but more importantly, neither would allow me to “muffle-strike” notes without resulting in either a nasty buzz or bang/pop when a “muffled note thud” was what I was looking for (raising the string action on my “E” and “A” strings provided the proper result).

The TRBX174 was my very first bass, and although it is considered to be an entry level bass, I’m sure glad that I kept it around and put that Babitz bridge on it!! Sure wish it had a set of old worn out half rusted round-wounds instead of the fairly new round wounds that are on it now…

About the strings, if I remember what I’ve read, Jamerson used heavy gauge Labella flat wound strings and he NEVER changed them. He used a pretty high action, mainly to avoid fret noise, but those kind of setting also has an impact on how we play, I’m pretty sure it’s an important factor of the Motown thing.

I think a passive bass with a P pickup is the most obvious choice, and you can play with the tone control to darken the high end of your probably-not-so-dead strings.