Imma say something super-flip, not because of the question (which is great!) but because I can’t help myself:
Learn the alphabet, but only up to G.

I want to be able to eventually sight read music, something I could kinda do as a kid playing violin. I definitely knew (and still know) the names of all the notes in first position on the violin fingerboard. It’s a little frustrating to me that I can’t do the same thing on the bass yet, but my brain’s RAM and ROM have a LOT more going on in them now than when I was 11. Sheet music was the only thing we used as well - no tabs!

I made this chart and hung it next to my desk. I did it by hand, in different colors, to help create a specific memory of physically making the chart, which I think is helping. 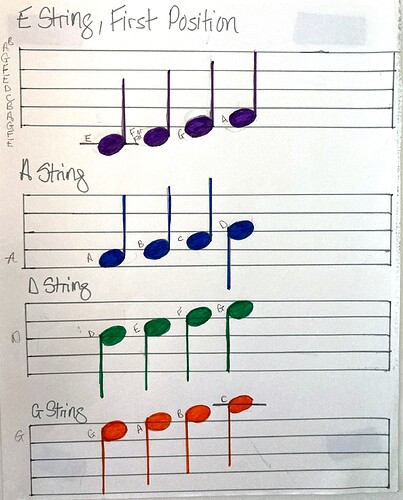 being able to say A-G both backward and forward

Backwards is my foe. I can write code in my sleep, I can spit lyrics out of my head from almost any Public Enemy, Beastie Boys, or Digital Underground song, but I can’t go from A-G backwards.

I can’t go from A-G backwards. I made this for you! So you can practice

I made this chart and hung it next to my desk. 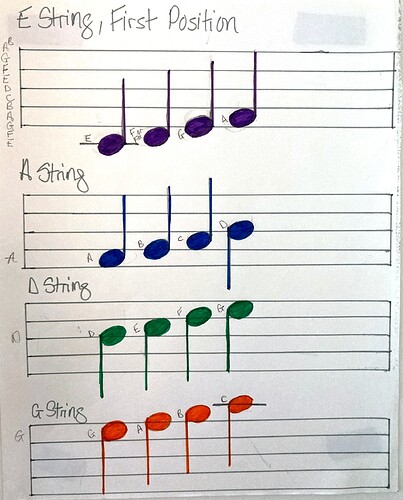 This chart is a brilliant idea BUT there seems to be one error in the labeling.

On the E string labeling the naming for F should be F or E♯ not F and F♯. F♯ is 1/2 step above F.
E♯ is however the same as F and F♭ is the same as E. This happens because there is only a semitone between the notes E and F.

This same thing happens between the notes B and C for the same reason ie. only a semitone between the two notes.

So, the whole point of this chart is to help me make associations between the notes on the staff and the notes on the fretboard. I started to include sharps, but then realized how crowded and messy that would look visually. Also, this chart is not about learning scales or keys. So I left them off. I’m surprised you took time to tell me about E# but didn’t ask where the other sharps were.

If you were playing something in G Major, what line or space of the staff would an F# played on the E string appear?

I tried learning by repitition on my own notes on the fretboard, I did not get far.
Then I started Mark Smith’s Sight Reading course, and that did it really well (as well as teaching me how not to look down at the fretboard much at all).
It really is worth investing in if you want to read music, or, just know the heck out of the fretboard.

He could do with some of your visual graphics @kristine - I think it would actually help his course a LOT. Love the color associations.

I’ve got that in my future (I bought it on sale). However he did a basic introduction to sight reading in the Bassic course of his and he’s got me into the habit of 5 mins a day of sight reading. So good on him for that.

I’m surprised you took time to tell me about E# but didn’t ask where the other sharps were.

I did not post to ruffle your feathers only to point out the error. I apologize if my post offended you.
There were no other sharps or flats shown on your diagram so nothing to say.

If you were playing something in G Major, what line or space of the staff would an F# played on the E string appear?

In the key of G Major the F# would be shown on the fourth line of the Bass cleff staff and the fact it was sharp would be reflected in the key signature notation like so.

I had to come up with a backward pronunciation to help me memorize it.

F# Minor, then. Regardless:

Unless, of course, you’re simply being condescending on purpose. Or you just enjoy sharing the depth of your knowledge so much that you don’t realize that’s how you’re coming off.

@Celticstar, not sure what the kerfuffle is. FWIW, I didn’t see your reply as being incorrect nor do I believe you intended to be condescending in stating it.

What are you talking about?
Never mind.

Unless, of course, you’re simply being condescending on purpose.

I apologized and you come back with this insult?

You made a mistake.
I pointed it out.
I explained why it was a mistake.
If you consider that condescending - so be it.

I am done with this conversation with you and I’m sorry I tried to help you out.
Hopefully, others got something out of my explanations.

FWIW, I didn’t see your reply as being incorrect nor do I believe you intended to be condescending in stating it.

Thank you @MikeC
I was just trying to help. No more, no less,
It was never meant to be taken the way she took it but hey that’s life.

The way I read it:

Her point (correctly stated) was that for G major, the F# in the previous octave would be notated in that space (with a sharp on the key signature in the correct place or an accidental on the note itself). She simply didn’t spell it all out because she didn’t think she needed to as it should have been obvious by context.

IOW, she put the sharp there for her own reference for a key she commonly plays, not to show an equivalence between F and F#.

I was just trying to help.

I am sure you were @Celticstar…to you.
FWIW…
If I may make one observation regarding forum ettiquette…
Sometimes typed text comes off differently than intended.
We foster a very encouraging enviornment here, and the smallest change in approach changes how someone on the other end might take it.

For example, if you said
“I notice you makred F# on one note and not the others, can you explain why you did this for clarity”

vs.
“This chart is a brilliant idea BUT there seems to be one error in the labeling…etc etc etc.”

May be subtle, or insignificant to you, but may mean the world of difference to someone on the other end.

Also, all caps and bolding is a symbol of yelling on the world wide interweb, which may also be offputting to some.

I am not speaking for @kristine here, she has her own witty voice, just making an observation that might steer conversations in a more positive, encouraging direction in the future.

Also, all caps and bolding is a symbol of yelling on the world wide interweb 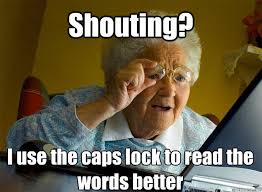 @Celticstar, your contributions regarding music theory were spot on and correct. This forum at its core is a sharing/learning space.

FWIW, it was readily apparent to me that you were sincerely trying to help. Your use of bolded text was clearly used for emphasizing key points, as many, many people here use/have used plenty of times before and since. Further, I don’t believe anyone who frequents this forum is an Internet newbie in need of posting etiquette lessons.

It’s true that reading online text is a very imperfect means of communication.

As an example, even after an apology was proffered, this exchange devolved into an unfortunate misinterpretation of good intentions.

I hope you keep sharing your music knowledge and experience.

Communication is a funny thing. Often in written dialogue, people tend to get caught up on their own words or what they meant, and not fully understand what the other person is telling them in reply.

If someone tells you they are bothered by something, that’s not an invitation to double down on your explanation. It’s a simple statement of fact. No amount of trying to convince the other person they are wrong will help there; all you can do is apologize, and try and understand what you did to make them feel that way. Only after that can you really proceed. It doesn’t matter at that point what your original intentions were; all that matters is what was understood by the person you are trying to communicate with.

In this case, Kristine posted a chart she uses (for whatever reason). Celticstar assumed she had meant something she did not try and say. Kristine replied with a pretty direct statement of what she meant.

Celticstar’s reply to that is where the conversation started to go south. Basically, he doubled down on the idea that she had made a mistake (when she hadn’t), and then also assumed that her “feathers were ruffled”, which was really kind of a half-assed way to apologize, almost passive-aggressive sounding to me (as a disinterested third party). And then continued to explain what he thought her error was, when he hadn’t really understood her reply in the first place.

Can you see why this might be irritating? All in all I can see why Kristine responded a bit more strongly the second time.

It’s not that Celticstar was incorrect in his explanation - it’s that he hadn’t gotten the point that he was explaining something that she had never intended to suggest in the first place. He was trying to correct an error that did not exist.

Look, I don’t think anyone had any actual malice here, but it’s a good example that even when all parties have good intentions, things can break down unless you carefully read what people are trying to say.