Hi Juli, they are very patronising glad you could hold your breathe I had not liked their first post, it made me feel angry lol
Well done
Jamie

I think they’re both awesome - can’t you have both?

I do agree with playing multiple basses though - when I had 1 for a while and got another, I couldn’t really tell the difference if I’m honest. But my tone was all over the place anyway, so I couldn’t “get through” and make my sound. But much later on, I can hear differences now.

Which really hasn’t helped my MBD

I will soon arrive at home and plan on going: “Honey! I’m home! I could not decide between these two so I just took both.”
I am really excited to see the reaction to that

Her: “…wha?.. oh… noooooooooo why me? Whyyy meeee? buäh buähähä”
Me: “Don’t worry I’m just kidding.” and explained the return thing to her
Her: “Oh… yeah, that’s okay.”

I… I don’t think so. Not at once. Not immediately.

Interesting that you thought I was being condescending, but that always depends on the context of the reader and not the writer. The basics that I was trying to put forward are that I believe that bass choice is very personal and that you’re doing the right thing in terms of what you’re doing. And that nobody in a thread about multiple bass disorder is ever going to tell you that you shouldn’t buy and learn.

However, in regard to opinions about stuff, I will point out something that you will see if you keep your eyes open for it.
Next time you see anything on the internet which has the ability to get feedback from the public, and I’m talking ANYTHING where someone can write back, be they ratings, comments, likes/dislikes or whatever, there will be a point where regardless of what it is, someone will NOT like or not agree with it enough to post that opinion.
I’ve been active on the internet for 26 years and have written literally more than all the Harry Potter books across six different topics. Two of which I’m internationally recognised on.

It’s impossible to cater for what viewpoint someone is going to read in what you write and so you can’t control on how you’re going to be interpreted. Someone of even temperament can miss one specific word and get what you say 100 percent wrong.
I bought $400 dollars worth of textbooks and research papers and read through them based on one forum post and a month later when going to reply, realised that I’d missed one “not” and the point was being agreed with rather than refuted. Even though I’d wanted a reason to go through all that research (On the gaining of expertise, pretty much everything done by K Anders Ericcson) it was a good illustration on how one person with a reputation for being precise got things 100 percent wrong and that person was me.

In the end, you get to know absolutely that you can’t make everyone happy, so you either give up, or stop caring about it.

Here I am lightheartedly trying to encourage you to go do what you want to do and learn from it and apparently I’m now “very patronising” according to one other opinion.

I can’t control those opinions, so I’ve learned to not care because they’re going to appear if I write anything at all. Every single person here should learn that if they feel like contributing to anything. There will be someone who isn’t happy.

Common sense tells me to stay out of this.
Caution to the wind… I’ll side with @juli0r on this one.

Interesting that you thought I was being condescending, but that always depends on the context of the reader and not the writer.

I find it interesting that you think so. I have found this to not necessarily be the case. Allow me to illustrate.

I’ve been active on the Internet for 30 years, and while I haven’t kept a word count, I think you could probably fill a small book shelf with what I have written. Most of that on the Internet, but I have also had many articles published in printed magazines back in the nineties, and yes, I was also recognised internationally in at least one subject (which, coincidentally, was Field Target, a discipline of air rifle shooting, and quite a few of my writings were about the psychology aspect).

So there.
In this particular case, you are not dealing with one person who experienced your comment as condescending – I’ve counted three, yours truly included. I think that this is a good indication that, in such a case, condescension is not exclusively in the eye of the beholder.

I think part of why you might have come across as condescending is a cultural aspect. I live next door to @juli0r (relatively speaking), but I’ve worked with US- and Canada-based colleagues for years. Trust me, we are culturally different. Don’t ask me how I found that out.

As @Jazzbass19 points out, you are most likely just trying to help… but yes, I also got the feeling that you were talking to @juli0r from an assumed senior position.
When you then proceed to state that your coming across as condescending depends on the reader rather than the writer, what happens is that you reinforce that impression. It would really have helped if you would have simply said “sorry, I didn’t mean to come across as such.”

Maybe that’s something to think about.

Hi @juli0r,
Just to reinforce my opinion on why I think it’s important to let the bass tell you how you feel playing it.
I am uploading some pictures of my 76 p-bass that has a set of flats on it.
As the photos suggest it looks very mature/ worn, beaten up, etc, pick guard broken volume control broken strings at tuners not neat and tidy etc and fret board worn down between fret 2 & 6 on the bottom (pics not really clear)
But of all my guitars this is the one that does it for me, it just feels right.
I think I’m in love 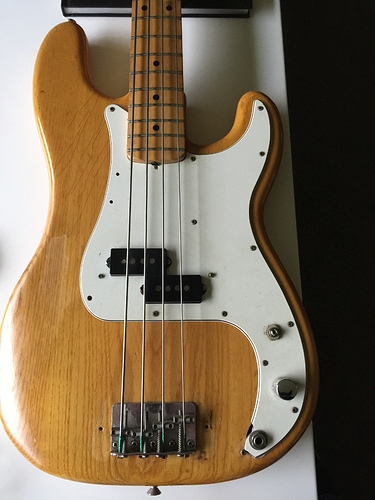 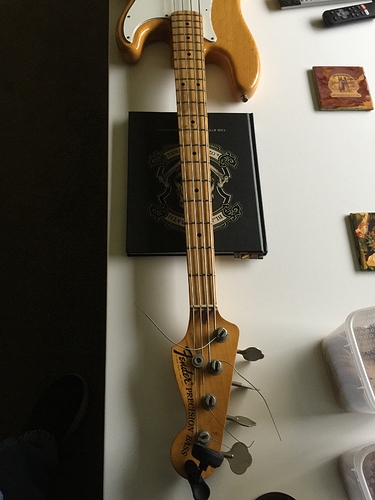 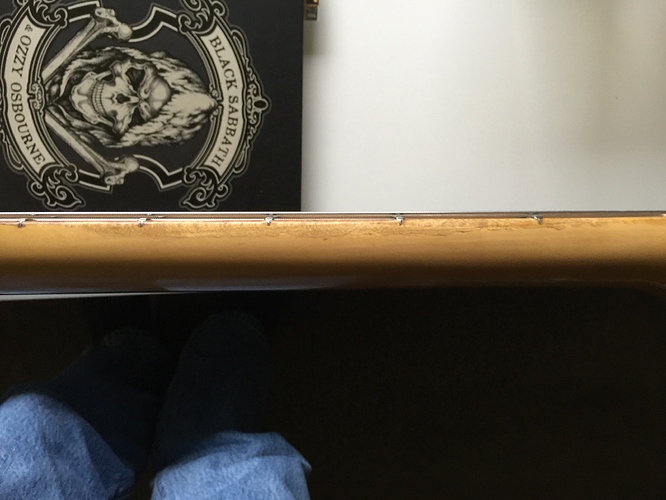 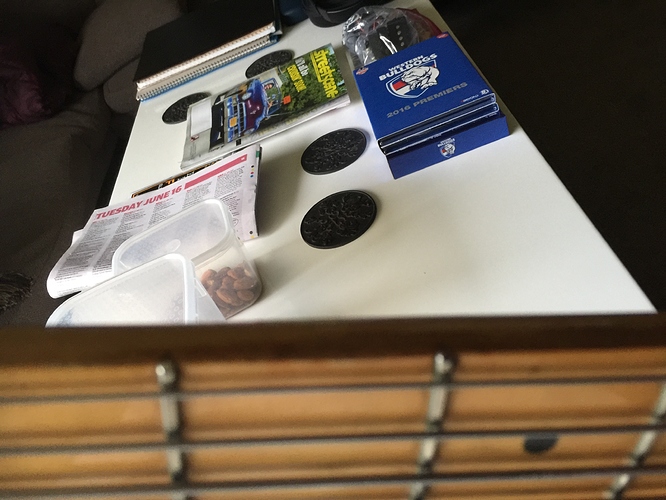 It would really have helped if you would have simply said “sorry, I didn’t mean to come across as such.”

Yep.
I certainly won’t discuss it in an extensive manner. I said how he made me feel the way he talked to me and he felt the need to explain himself. That’s that for me.
While I’m glad you are siding with me @peterhuppertz I don’t see this discussion leading to any positive outcome. Also the reason why I haven’t responded directly.

@b.s.excavations Back to fun things!
I agree.

I tried to pick up the Cort again because I said to myself that I should test both of them as much as I can but I had to force myself to do it and a slight feeling of relief overcame me after I picked up the ESP again. The more often I pick it up the better it feels.

Something I haven’t done yet is pick up the beginner bass I used to play on since I got both of the other models here. I’ll try it now to see how that feels now compared to the other two. 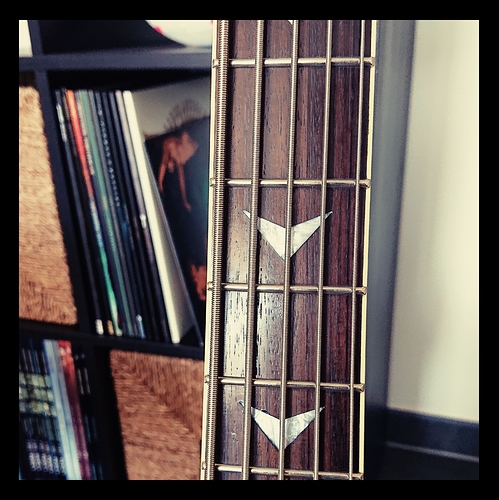 Show Us Your Basses Gear

A new addition to my little bass guitar family

I’ve discovered a Multiple Bass Disorder bypass method.
I am kind of looking around to see if a Peavey Cirrus just happens to appear.
My search alert came up with a Peavey Millenium advert, but it had no picture.
A quick google image search turned up some potential candidates, so gave the guy a ring, then went to have a look.
He had a basically untouched bass, and explained that he’d intended getting back to playing, but his health had ended up preventing it. 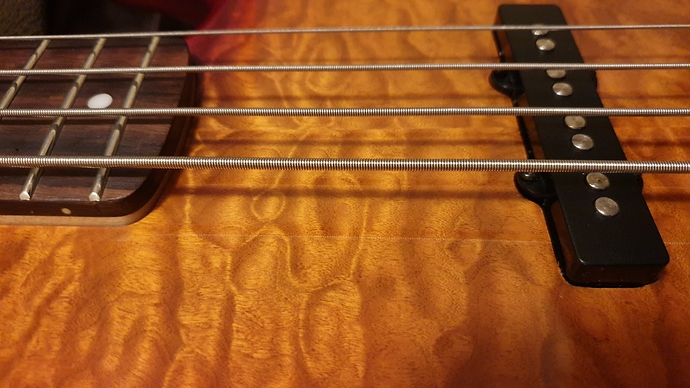 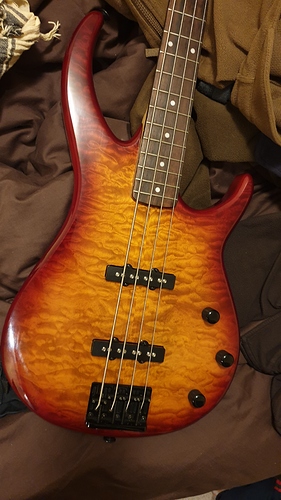 It was so pretty, that I decided to just pay him what he’d asked.
Unfortunately, it was a smoking household but that’s what a complete strip down and soapy water is for.
Within fifteen minutes of being home, the strings were off and on the boil on the stove and the second wipe down was done.
The fingerboard absorbed more lemon oil than I thought possible.
Four soapy water wipe downs later, there was barely any smell detectable.
Two more water misted wipes and the finish came up like freshly polished. Microfiber is definitely your friend.
Strings dried out and back on and then an hour chasing intonation to ludicrous accuracy because I just HAD to disassemble the bridge entirely.

Then checking it all out plugged into the Roland 100w Bass Cube. This was $180 well spent. I’m quite impressed with the range of sounds from this little bass. It may be the most tonally different passive bass I’ve yet tried. Overall tone, neck pickup volume, bridge pickup volume. Equal volume for “humbucking effect”. This sounded a bit odd, but does actually work.
I would have thought that this meant that the pickups are wound in opposite directions, but I am not sure how that wouldn’t also cause cancellation. I know this can be a problem when there is only one balance pot and someone has their pickup wiring out of phase.
I’m not sure what is going on other than I really like it.
But I don’t need a 13th bass.
What to do?

I have an idea!
I bought my friend’s son a 70 watt Fender Practice amp. The one with the pulsing Red light option.
He’s twelve.
Surely he needs a second bass so that he can have an opinion based on practical experience?
I think so.
So I throw it in a spare gig bag and go visit.
He thinks he needs a second bass too.

It’s totally NOT Multiple bass disorder if I buy a bass and give it to someone.
Mind you, this makes the third time I’ve done it in six months…

It’s totally NOT Multiple bass disorder if I buy a bass and give it to someone.
Mind you, this makes the third time I’ve done it in six months…

@admacdo I just sent my brother in law two ukulele’s , I se that as two bass spaces

That is a fair bonnie bass you have there
Jamie

@Jamietashi and @admacdo: giving away instruments is sharing the joy of music!! Way to go, guys!!

I like the Peavey’s too. I keep an eye out for them, but have not found the right buy yet. But some day, I will have one like that, or the Cirrus

Well, today is kind of the end of Multiple Bass Disorder and Gear Acquisition Syndrome. One more cab and I’m pretty done as I found a neat little TX300 Hartke amp which can replace the practice room Roland.
I’ve discovered that your technique errors can easily hide in smaller combos.
Now I should learn to play. Mind you, I’m having a heap of fun. 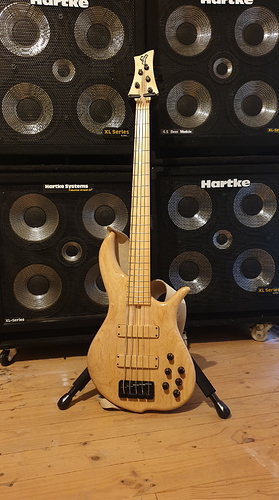 Now that’s a wall of sound

Please open a petting zoo for your gear! I’m drooling and half-mad with Gear Envy over here!