Great cover and thank you from down under although thank you seems a little inadequate.
Not forgetting thank you for your service. It will never be forgotten

Okay Buzzers, this is my second cover in 2001 and it’s only the 15th of January. I hope you don’t think I’m hogging this thread

I mentioned in this thread about how I often choose the songs I want to cover based on some past event or an emotional moment. In that thread I also mentioned that I was working on a song that had a very personal meaning to me. This is it: Big Girls Don’t Cry, by Fergie.
She was touring with the Black Eyed Peas who were the opening act for U2 on their 360 Tour. I had only recently moved to Phoenix, when in the fall of 2009 a gentleman friend from Portland, Oregon, from where I had just moved, flew into Phoenix for the U2 concert with two very expensive floor tickets. He invited me to join him. How could I say no?
I was excited to see U2 and especially Adam Clayton, who I absolutely adore. I was not that familiar with Black Eyed Peas at that time, but they put on a great show and I grew to like them. The highlight of their performance (to me) was when Fergie, in her typical scantily clad fashion, sat on the edge of the stage and sang this song. I was standing only about ten feet from the stage and I felt like she was singing it to me. As much as I loved the U2 concert, this memory sticks in my head more than any other.
It’s a beautiful song with a less than memorable bass line, but I just wanted to do it so I can feel that I’m part of it. It’s hard to explain the feeling that I get when I play it, but now instead of just listening to her sing, I can feel as if I’m her bassist. Weird, huh?

NOTE: The bass doesn’t come in until 45 seconds into the song, so be patient.

@PamPurrs Nice work as always you are pumping them out!

Here is a cover of one of my favorite Christian Metal bands Love and Death. This song I W8 4 U features Mattie Montgomery lead vocalist from the band For Today. Love and Death is the band Brian “Head” Welch started during his break from the NUmetal band Korn. After rejoining Korn a few years back the band was on hiatus. However, they are releasing new music in Feb 2021. I know this is not typical of what I would normally cover. I just really wanted to play this song once I received the new 6 string, Ibanez, this past week. The song is originally written in drop G# tuning but they never actually went that low so I transposed the song into the right key without having to drop the tuning. It is simple to play the only issues might be grabbing the timing on it. 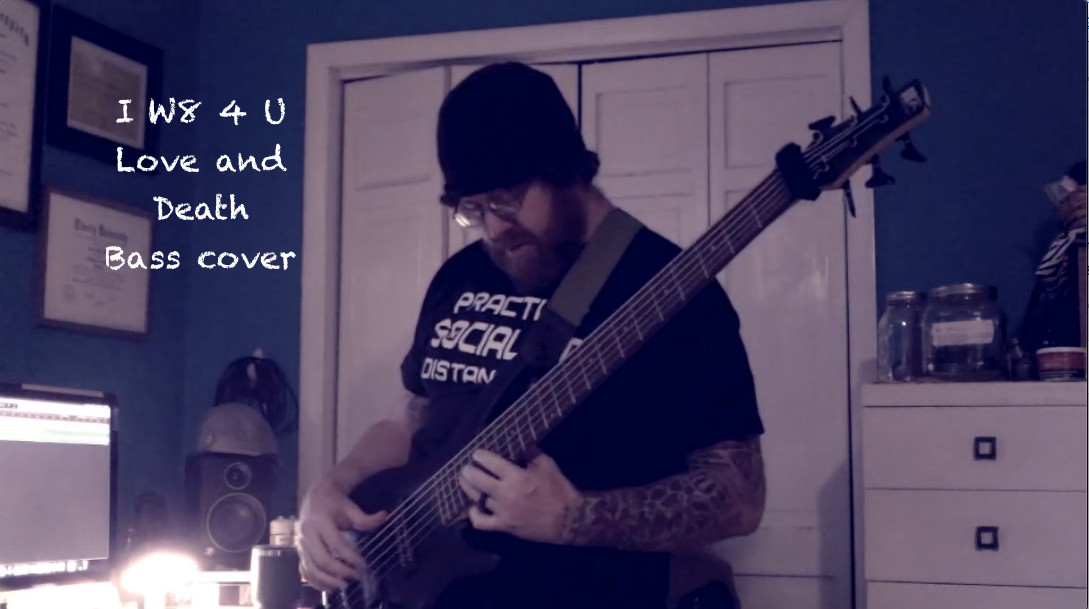 @PamPurrs We must both be doing covers tonight lol

We must both be doing covers tonight

@LesterH we are cosmically connected

@LesterH nice job on that song. Not my type of music, but I did listen to it all the way through. You did quite well on the 6 string. The 6 shooter is my next step from the 5 string, your cover just made me jones for it all the more.

Thank you! I feel at home on the 6 string to be honest. I don’t really play this heavy of music anymore I usually am working on Jazz tunes these days lol

I like jazz also, and so does @joergkutter and maybe a few others on the forum. I prefer jazz/blues fusion, with maybe a little soft rock blended in for spice.

Two very different musical offerings!
Nice job @PamPurrs Totally in sync with the the whole performance.
And a favourite band covered by @LesterH. Certainly seem to be rocking that 6 string

@mac Thank you, tonight was about just having fun.

@PamPurrs me too! I have talked to @joergkutter about it a good bit. That was the main reason for the six string bass. I am working on some original jazz fusion material now in my spare time

Hi Pam, @PamPurrs, great video and production, as we have come to expect😎
I’m not sure if it’s from my end but there seems to be a misalignment between your finger picking and the bass notes in the song🤔.
Your looking very comfortable playing your Yammie👍
Cheers Brian

@PamPurrs WOW, awesome cover! I’d love to hear a little a little more gain on your line…even to the point where the bass was at the vocal level. Show us that stuff!

Nice job Lester, @LesterH you look like your in the zone​:+1:

Great grungy sound from the 6 shooter

I agree with what you said around the timing stuff on the song, really tricky​:sunglasses:the attacks come on in a non standard time which makes it hard to lock in on, nice job,
That fretboard is like going from a skateboard to a surfboard