Show Us Your Basses

Maybe someone cast a resistance to music spell?
See if you can roll your saving throw…
Is your Bard getting jealous of the new bass?

I’ll have to find me some songs to practice

From the low-tuned, excellent metal you’ve been posting, I think you’ll be able to find plenty of perfect music for that low Beast string.
Congrats!

I cannot NOT think of you as a chaotic neutral bard.

Wow, didn’t know Schecter made a bass in the Omen line. My buddy has a really nice Omen guitar. Beautiful instrument, just like yours is!

We have a DnD Session this weekend

It’s been years, but man if I wanted to kill time back in the 80’s, DnD was the way to do it. We had a lot of fun. Ultimately, what killed our DnD was when we tried to use computers to assist us–but then that became our hobby, and ultimately our careers!

cough chaotic evil is what I play.

for that low Beast string.

Love it! “Beast String!” A bass with a Beast Mode!

I’m more into the heroic part of the game and our GM tends to be opposed to evil alignments anyway, for sake of group cohesion.

After completing B2B I decided to upgrade my cheap beginner bass/amp: 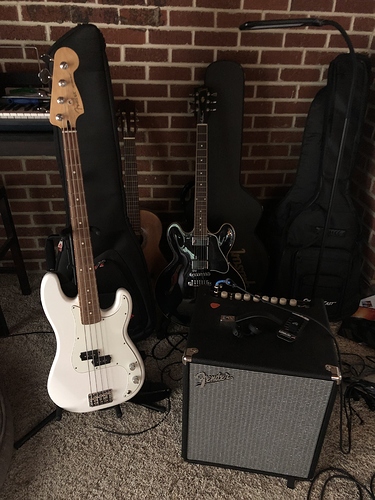 I didn’t love the polar white at first but got a good deal on this one. It does look pretty sharp in person, and I’ve since discovered the wide variety of pick guard options out there. More importantly it plays and sounds amazing! By far the nicest instrument I’ve owned (which isn’t saying much haha).

I’ve since ordered a Scarlet Focusrite and Zoom FX pedal, so I guess this is the start of my chronic GAS

Hi @bjams,
Another GAS addict, that’s what we like to see😂
Cheers Brian

By far the nicest instrument I’ve owned (which isn’t saying much haha).

That guitar in the background looks like a nice one too. Only mark against it is that it is string heavy, it has too many, cuz it’s not a bass.

Nice looking bass. I am not a fender guy so much, but if I were, it would be that in Orange, or at least white with an orange pick guard and strings😜

@T_dub Yeah you’re right the guitar is a nice Gibson, it’s actually one of the prototypes of the Roy Orbison ES-335 that his wife gave me as a Christmas bonus when I worked for her company several years ago. It’s got some flaws and needs a good setup but it sounds great. Even better if someone besides me is playing it

The orange Fenders are really cool. I mostly wanted the sage green but those aren’t so easy to come by anymore.

Polar White is awesome because it gives you the most flexibility for custom pickguards!

I never heard of the Schecter brand until I ordered it. It was a floor model, and got a really nice discount. What caught my eye was the nice mother of pearl inlay. I am not sure if it is real mother of pearl, but still looks really nice. It is not a high end bass, like an Ernie Ball, etc., but good enough for me. 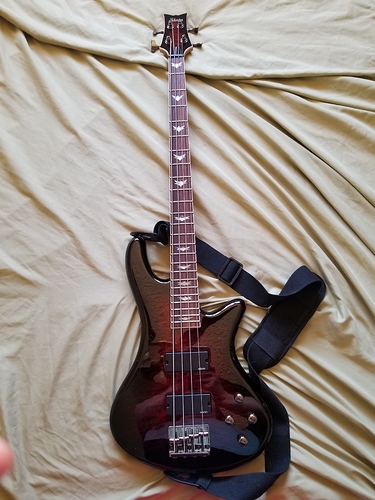 Beautiful bass you got yourself

Schecter are more known on the heavier side of music

They might not have the reputation that some high-end brands have, but they produce good quality guitars. What I like with their basses is the thin neck and the easy access to the higher frets, especially when compared to the entry level Squier that I first bought (and which seems to be an issue even with more expensive Fender)

Yeah, that is why I put the Music Man aside for now, because the neck is really W I D E. So as a beginner, the thinner neck makes the fretting a little easier. I love the cherry finish. It looks so beautiful! 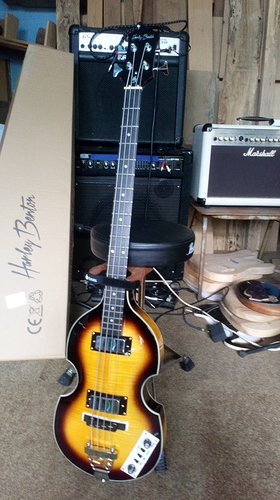 107003768_630034574563779_166027757877608126_n2064×3682 759 KB
This is a Violin Bass by Harley Benton from Thomann Germany. They call it a Beat Bass and it’s based off a Hofner, except half the price £149 164 euro $185 which is a great price. The reviews were very good so I bought one.
On first impressions, she is a thing of beauty how they manage it at this price point is amazing.
However she doesn’t play buzzing on E A & D. I’m thinking she just needs a set up. The bridge was maxed out especially at the low E side okay a shim under the bridge would be a fix at a push. However whoever did the set up has filed the nut to far and the A&D are almost touching the first fret. WTF
So in the meantime Thomann get back to me, I had asked for a return and they sent me a label to take the box to a local Post office. Well that kind of poses a problem for me.

106455921_284210026029083_2485086049471473817_n (1)752×1548 161 KB
This is the box.
Anyway after I sent them this picture, they phoned me. They said that due to the circumstances they would arrange for collection 4-7 euro as it’s a bass it will be 7 euro. They are very pleasant to deal with really nice people, he then offered me a hefty discount and a new nut if I were to keep it. That’s when this auld brain had a brain fart. Les Paul’s why had I not thought about that before.
A Les Paul neck is set at 4 deg I’ve seen one 5 deg and that bridge was maxed out. That’s on Gibson 24" scale. As you can imagine with a 30" scale that 1 deg difference
makes one helluva big gap at the bridge. So that’s when I realised the neck was set off and you really dont want to reset a neck on a fixed. It takes time and is messy to remove and can also lead to so many other problems.
So I declined the offer.
So now she will be collected by DPD tomorrow and go back to Germany where the Thomann technicians will inspect her and hopefully validate my claim. If they don’t I don’t what. Once they have confirmed that the bass is faulty they will then send me a replacement. Time frame? They cant say as with Covid 19 they are not at full capacity of staff.
I would normally just ask for a refund pull the trigger and buy a Hofner, but I’ve seen several of these Harley Benton’s and they have been fantastic. Electrics are not the highest quality but that’s a simple upgrade AND the pup’s are surprisingly great they really give the sound of the Beatles, you know that sound very recognisable. They have it.
So I’m just going to wait and see.
Jamie
12 Likes
alexmorrison14 July 1, 2020, 6:33pm #2072

Here is my Black Beauty. 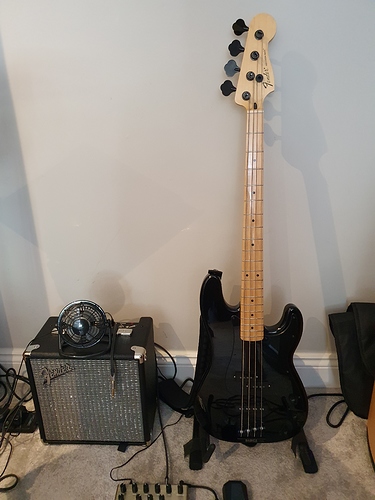