Upgrade Day! Anyone Else Upgrading?

That’s very weird, because my experience with AppleCare is you generally just walk in to a genius bar and walk out with a new (refurbished) phone. I’ve done this twice myself (mic jack issue on two different phones - I guess I am hard on mic jacks. Of course, those don’t exist any more on Apple devices, a legit gripe

and once with my wife’s phone for a battery issue. For the battery issue they said next time just call us and we’ll ship you a new phone and an envelope to send the old one back in.

A synopsis:
Under European consumer law, a warranty period of 2 years is mandatory.

Apple’s statement:
Apple Distribution International of Hollyhill Industrial Estate Hollyhill, Cork, Republic of Ireland (or their successor) (“Apple”) warrants that the Apple brand hardware product and accessories in the original packaging (“Apple product”) are free from material - and manufacturing defects when used in accordance with Apple’s user guides, technical specifications, and other published guidelines for the Apple product, for a period of one year from the date of purchase by the original end-user / purchaser (“Warranty Period”).

Now, of course, they are aware that this violates consumer law.
So here is how they solve it:

Interesting. Both here and in the US, AppleCare is basically “something went wrong? here’s your new device”, in my experience. Apple’s reputation for customer service is pretty stellar.

Also, AppleCare is by far the best warranty in personal computing.

I got my first MacBook in 2007, a gift from my mom. She got it for Xmas, but gave it at thanksgiving. It was great til the screen went out in 2016.
But in 2010, around thanksgiving, I remembered the AppleCare I never used. I took it in because the dvd rom would jam up when trying to eject @ disc.
I took it into the apple store, showed it to the guy at the counter, he quickly identified the problem, someone holding the laptop right around the dvd rom slot. I recalled that’s the way my (8 year old at the time) daughter carried it like that all the time.

So, he reached into his pocket, pulled out something that sort of resembled a bass pick, and opened the gap a little, and we ejected a disc no problem

Now, this is where the story begins.

He looked at the computer and said “ your apple care ends today. Can we have it for an hour and a half you can pick it up here in 90 min.”
Ok

I went back, and they presented to me a MacBook that looked brand new. I think the hard drive, MB and ram was the only part of that laptop that I gave them. It was a whole new case, keyboard, screen, everything, it looked brand new, and was a bit peppier then it was before.
I mean let’s face it, MAC’s are peppy where PC’s are slow as shit for basic OS things, including power up and down. Well, this one was as fast as the day I first used it,

Is Apple care the best. Yes, hands down.
Including the employee. I never said AppleCare, I would have asked if he didn’t fix the issue with a bass pick. But I would have left, problem solved, happy as ever. I never expected that.

Also, when I got home, and opened the bag the laptop was sent home in, there was a receipt.
Listing the things I mentioned, and more.
Case, KB, Apple screen, etc… $1500. Balance due $0.00

Yep, yep, stuff like that has been my experience as well. No idea why it seems worse in Europe for Peter - his experience definitely sounds bad. it wouldn’t be the most surprising thing if there were regional differences.

That said, Europe has MUCH stronger consumer protection than the US in general. We should envy it actually. Maybe Apple sticks more to the letter of the law there.

Yeah, it’s too bad, sucks to be turned off to stellar products cuz the CS sucks.

Btw @peterhuppertz, I was. PC advocate for many years, built myself many for work and play.

I bad mouthed Apple a lot, calling the overpriced gadgets myself, very arrogant.y, in my case, but when I got one in my hands (my moms new MacBook Pro, back in 2007, after a tiny bit of direction to understand the backward (to PC) OS, it was not 90 seconds later I said to my Mom, I gotta get one of these.
That was around Labor Day 2007. I was living in Phoenix, AZ at the time, near @PamPurrs, and was out for Labor Day weekend, and my dads Birthday.
When I returned to CA for Thanksgiving, she gave me an early Xmas present.

I live in both worlds now, because MT work is all PC, but for my personal devices, and Laptops ( when I have one) are all MAC.

Work is not by choice, it’s by need. Personal is all choice.

But that’s my experience, not everybody has the same

I actually do all my music stuff on a windows PC (my gaming desktop is way more powerful than my laptop, and after 30 years, mac gaming is still a joke in comparison).

For work or normal usage, other than sheer volume of software, I vastly prefer MacOS to Windows, of course. And especially for supporting others. Even with the improvements to Win10, walking family members through issues with Windows is a maddening timesuck despite being pretty familiar with it.

The company I worked for until 2017 used Macbook pro’s.

I did not perceive any performance advantage over my Windows 10-equipped PC (which is a fairly humble I5 Kaby Lake with plenty of ram because Photoshop).

Until a year or 10 ago, BSD would have a performance advantage over anything from Apple, Windows and Linux, especially on network operations, but that advantage has evaporated. Visual Studio runs fastest on a native Windows machine, and since that is what I make my money with, it’s my OS of choice. The fact that the software I develop runs on the .NET Framework makes the decision even easier. I like Java as a concept, but hate its performance and its occasionally crappy implementation.

And the hardware needed to run it is substantially cheaper at a comparable performance level. After all, a computer is a tool to do a job with, so if I can get the same performance at half the price, it is a no-brainer.

Caveat: If family members need assistance, I don’t “walk them through it” – I merely provide remote assistance.

My experience with PC and Mac have been yes and yes.

I have a MacbookPro from 2012 that runs just as fast today as the day I bought it and is ready to use as soon as I open the lid. It’s been a great machine.

For the music station I cobbled together a tower PC myself because I could get the parts that would optimize what I want to do for much less $ on that platform. Studio One runs fine on either platform. What I cared about most was having a ton of memory and solid state hard drive space for sound sample libraries because I want to play with orchestral scoring. I always get the nicest processor I can just before the price curve takes off like crazy for going any nicer. I figure if I ever overload the processor with effects I can get some kind of off-board parallel processor like the UAD and when I eventually do it will be faster than the ones that are available today, extending the life of the whole rig out into the future.

I usually read the reviews of what the gamers are building. They are really good at finding the most power for the money. I’ll just leave off the crazy expensive graphics cards they are putting in since any basic video output can draw faders and buttons.

Success!
I decided to install the flat wound strings today so I took the old strings off and saved them, oiled down the fretboard and installed the LaBellas. OMG what a difference in the sound! I love it. At first blush the action feels pretty good, but I’m going to check it after some time to let the strings stretch a bit.

Just did this as a test for color, and comfort / fit. Results are positive for everything. Not too much money at around $14
Ernie Ball Strap Locks on my LTD B-4E.

The strap and locks 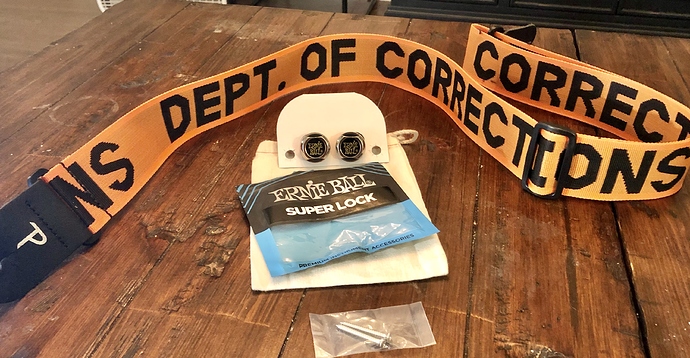 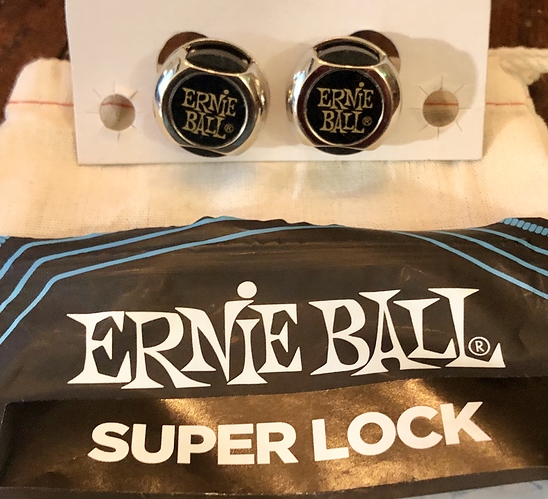 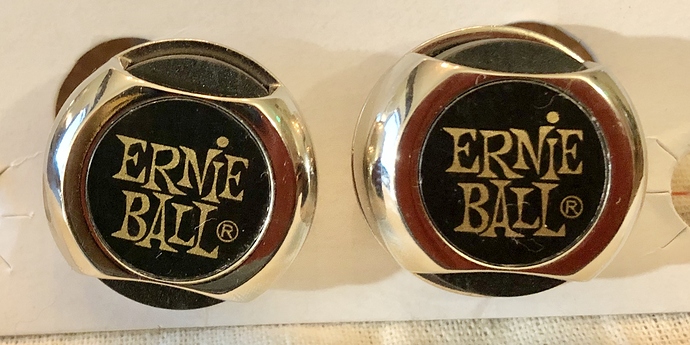 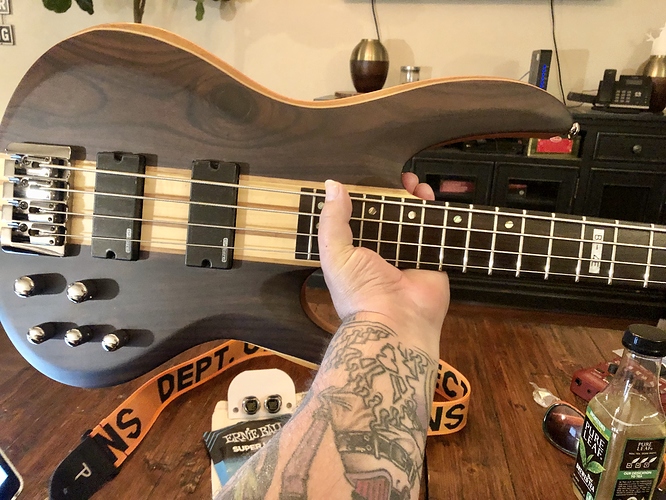 Swapping out the current parts. 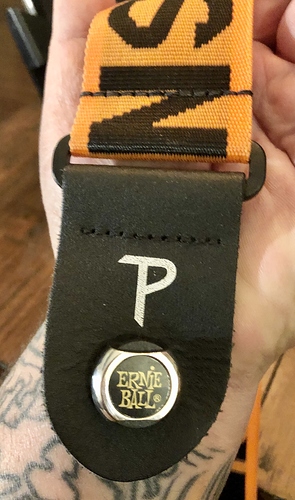 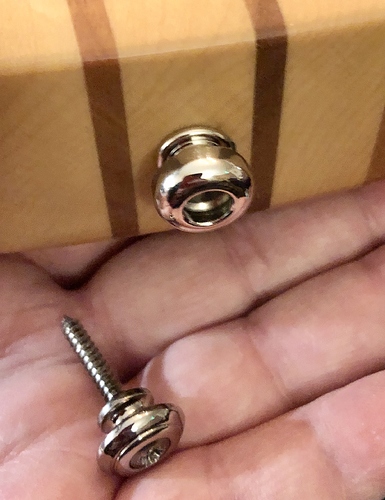 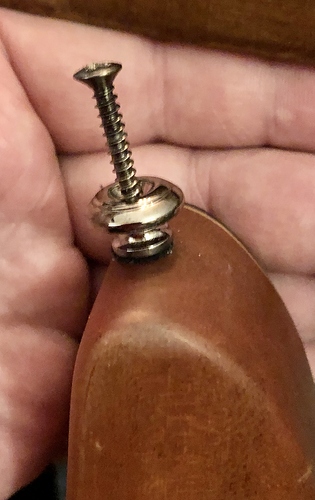 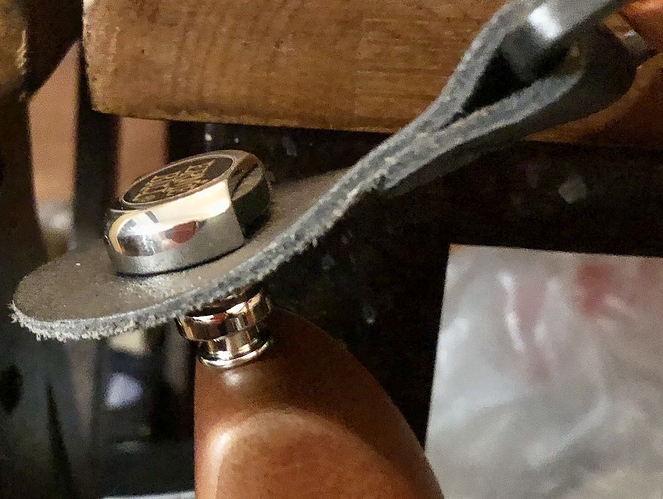 It was super easy. No drilling involved (which would not have been a problem, just highlighting the fact) and the screws are a different pitch then what was there to help secure it.

All in all,I am happy with the color match, and the way the device works. It differed from the others that slide and pop into place. These go in the center and lock. You squeeze to buttons to release, and done.

That bass is a beaut

Hi @JerryP,
Flatties are the best, smooth as silk and very warm,
I have them on just about all my basses.
Cheers Brian

I thought we should avoid talking about religion. (PC vs Mac)

But just to chime in and give @peterhuppertz some support as European: I have not made good experiences with apple customer support. It was about the iPod back then. There are more reasons for me to not go Mac, but then it would really be a more realigious type of discussion instead of my own experience.

Not even a week after the warranty was void my iPod broke. Since there was no warranty on it anymore I would have to pay for repair and that didn’t really pay off, because there already was the next gen released and I would have to pay as much for repair as was the price for a used one. Also the warranty apple gives is the lowest for any tech product here. When talking to the support there was absolutely no goodwill there. They told me “you’re screwed” in nice.

So I’m inclined to believe it’s better in the US after hearing your stories, but for Europe I can corroborate @peterhuppertz story.

I also agree with him on the hardware cost and also used to work in a company with a Macbook Pro.

I really Like the look and style, as well as the mechanics of this system.
Also, some on Amazon were showing drilling in the instructions for their screw. It’s no big deal, I would be comfortable doing it, but wait.
Why do I have to modify my bass to use YOUR. Screws when I can just take the existing one out, and put this one back in. What if I decide to sell the bass and want to put the original hardware back? Just doesn’t sit good with me.

Also, these mount by going inside. Press the buttons, insert, let go, locked. Others slide over, and pressure lock. It’s ok, but seems like more wear on parts, and I plan to unlock, at least the tail end every time.

Anyway, I am happy with the quality, aesthetics, mechanics, ease of set up, and price.

And for you Fender Buffs: 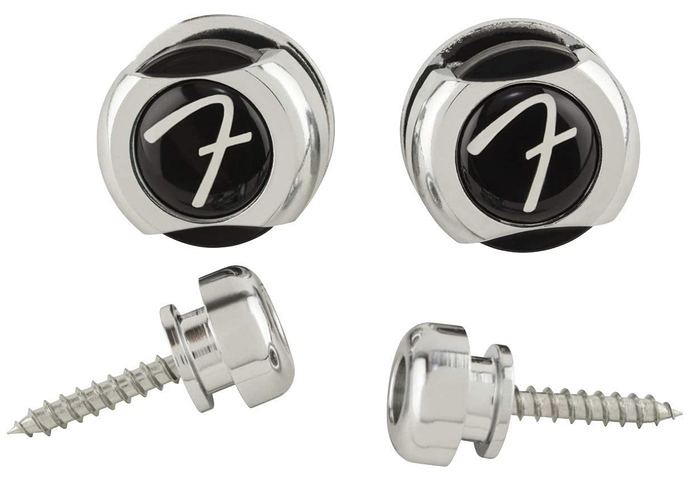 Excellent upgrade @T_dub! Certainly one of the least expensive but most important upgrades anyone can do to a bass!

And such a beautiful bass!!

Thanks for both compliments