Who's on fourth bass?

I came to the B2B course from a winter lockdown time filler of making electric basses, and having made three I thought I had enough. However, I was alerted to the availability of a some recyclable wood by a work colleague (I work with some of Manchester’s premier skip surfers, at a north of England university). The wood included a Mahogany skirting board and a heavily scarred Iroko work bench top. The Iroko board made a lovely new worktop for my shed work bench. The temptation to use the wood for a bass was insurmountable.
I cut the Mahogany board down its glue joints and reorientated the strips into a glued neck blank, which was 970mm long. This meant that I needed a very short scale design, as the only extra material was enough to make a fretboard. I plumbed for a 762mm (30") scale and a neck-through design. The remains of the Iroko board formed the wings of my design, although it is only 28mm thick and there isn’t enough to glue two together to make a board as thick as most bass bodies.
I dislike the aesthetics of Fender headstocks, and plastic scratch plates. Leo Fender design that I really like includes strap button over the 12th fret, solid body for ease of manufacture, very simple (but ugly) and easily adjusted bridge, nut in a neck slot.
So, it will have a sloping headstock but not necessarily 15 degrees, I quite fancied a Rickenbackeresque shape. The 28mm wing thickness is only a problem when you realise an output jack is 30mm long, so I needed a control cavity cover at least 10mm thick.
I have a carpenter’s bag of hand tools but only a cordless drill and palm router. I have three G clamps but no sash clamps (so gluing stuff together can need some magic). 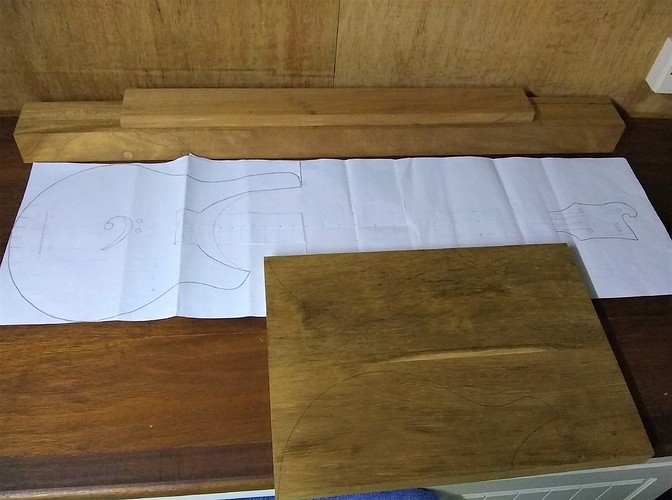 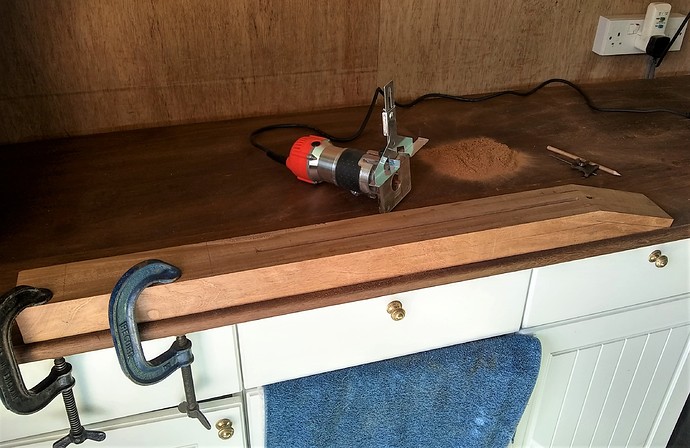 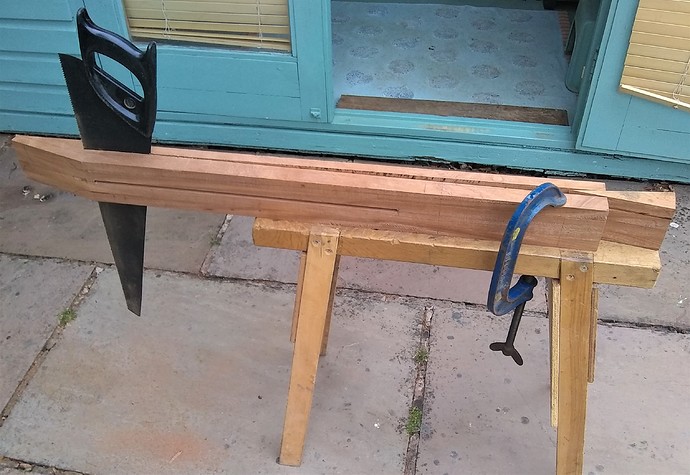 3 thickness the blank3033×2092 1010 KB
Since I am the client and engineer, I have allowed myself to start work before the design was complete and although this is a really bad idea, it has been chaotic fun. 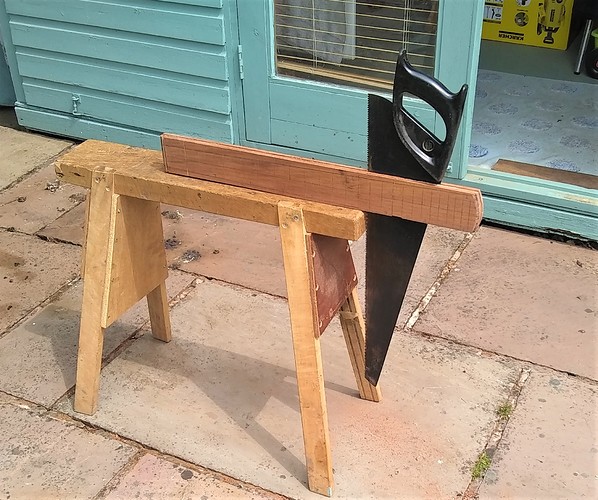 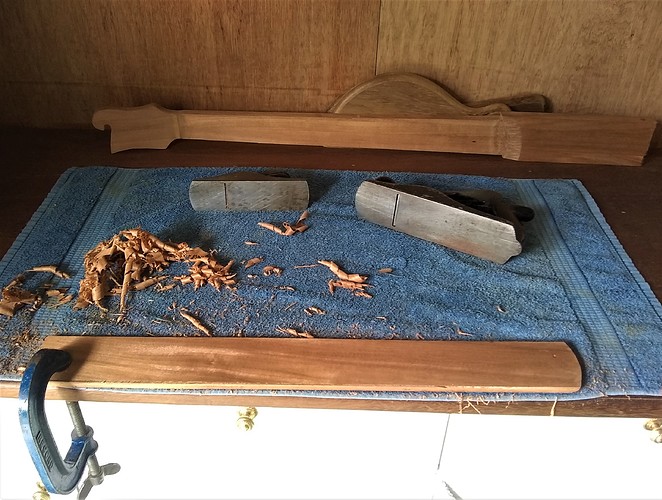 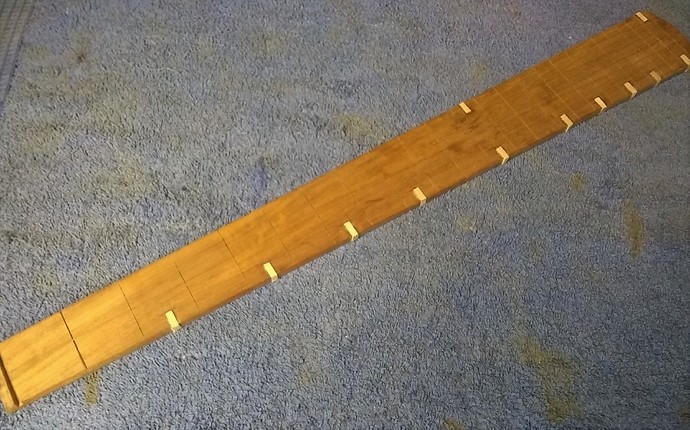 10. fret markers in3241×2021 1.31 MB
The tuners, bridge, truss rod, strings, pickups and electronics came from a trashed ebay bass at a cost of £25, so apart from fretwire, this is my only financial outlay. 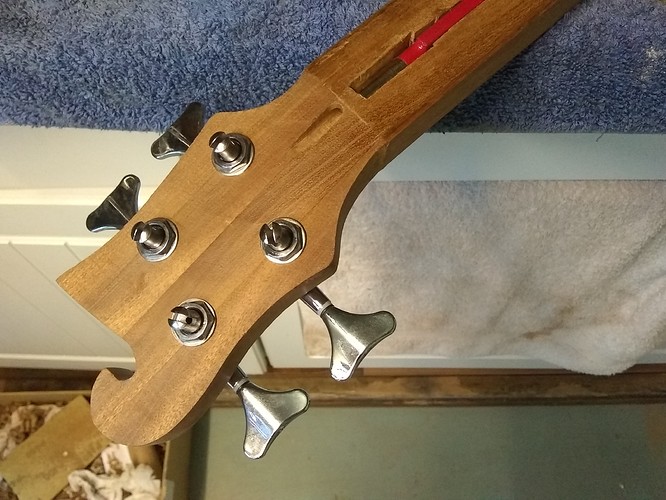 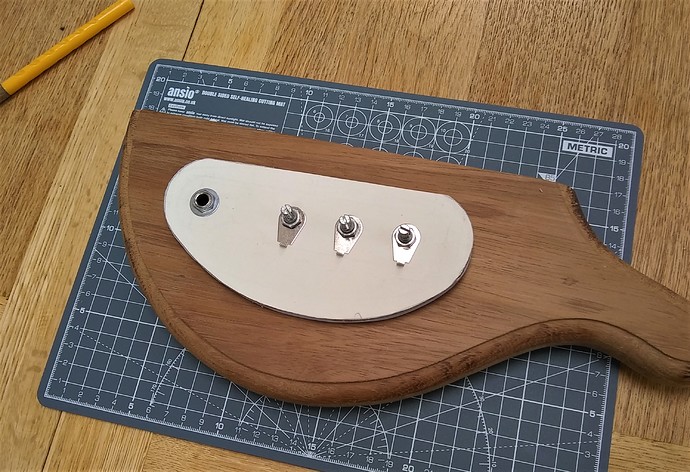 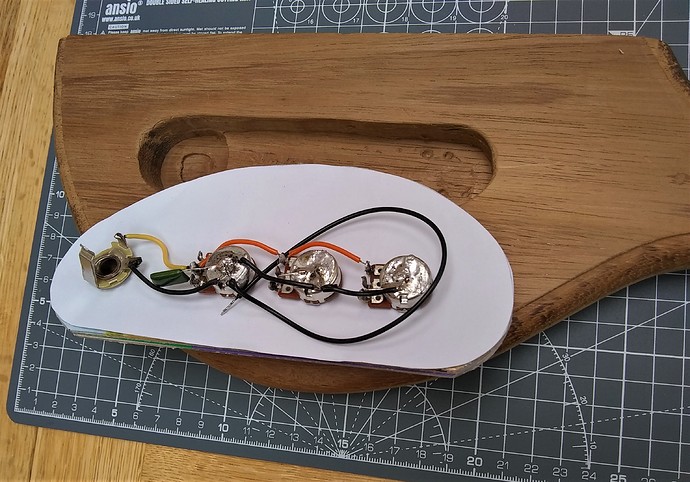 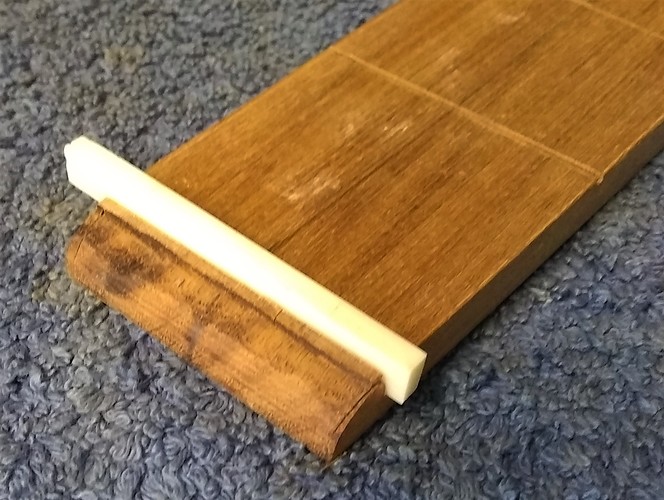 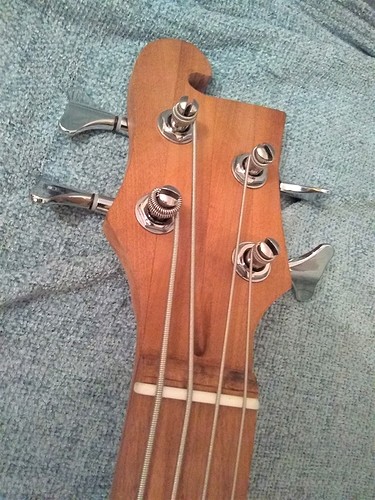 16d. nut in place2448×3264 1.6 MB
Making a neck-through design was much more demanding than a separate neck. Everything seemed to get in the way. 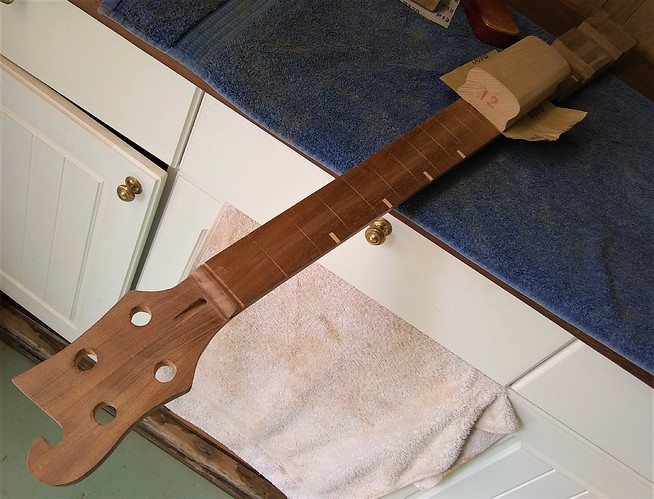 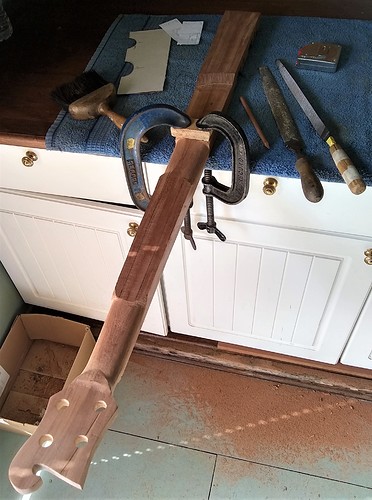 17b. profile back of the neck2271×3045 1.14 MB
Some things went badly wrong: I decided the headstock needed to be 5mm thinner, so I took a saw to it. I ended up with an overcut and opted to remind myself to think first by filling with sawdust and glue, giving the headstock an Ernst Blofeld scar over the left eye. 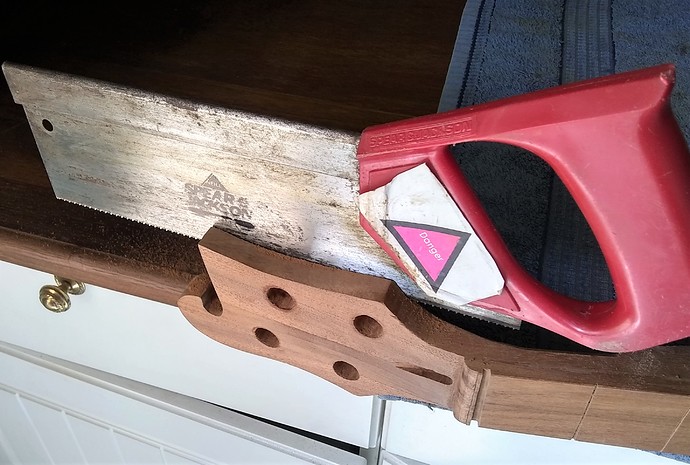 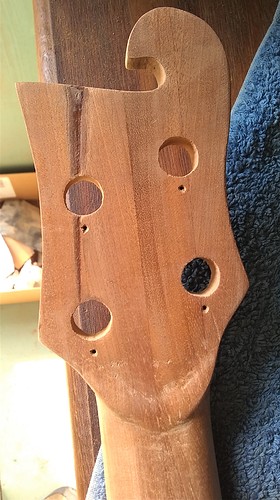 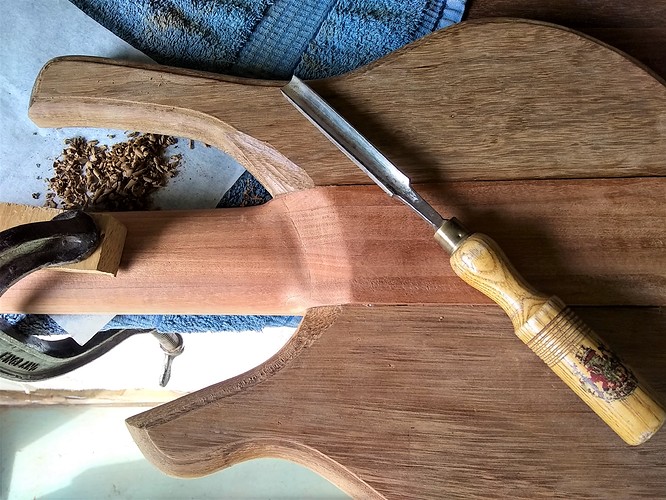 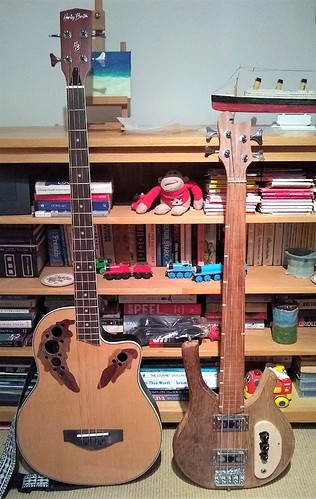 long and short1899×3001 1.09 MB
Aesthetics – I think the Maple control panel is a mistake, it probably needs replacing with a piece of Mahogany or Iroko, what would you use ?
I cut the fret slots and sanded the fretboard radius but I am waiting for fretwire to arrive. However, the temptation to play it fretless was unavoidable. So, should I put Maple fret markers in and go fretless ?
It weighs just 2.5kg (6 lb in old money), I have seen posts about heavy basses and wide straps, is this important ?
17 Likes
REPA July 12, 2021, 2:48pm #2

That is certainly an impressive build!
Not sure about the maple control panel as you’ve pointed out and agree a darker panel might look better but man I’m still reeling over how much you’ve done!
Fretless sounds good but as it’s such a personal build it’s really down to your playing preference and what will make you feel comfortable and happy.

Weight isn’t important on the lighter side, and since its a short scale, most likely an asset.
Agree a darker control plate would look nicer.

As for fretless, I think this is such a unique bass you might wish to keep it fretless. Why not play it a while longer and then decide. Easier than going the other way.

I can design a bridge on the back of an envelope but obviously I’m no guitar designer. The maple was such a good idea until I took the photo of the finished bass. I’m thinking to make an Iroko cover.
I thought I would need to be an expert before attempting fretless but I was really surprised how easy it is to fret (within the bounds of my finger ends). I would definitely produce embarrassing noises on a blank fretboard.

It’s amazing that you could do all this!

I can’t take all the credit as my dad was a joiner and cabinet maker, so I grew up playing with chisels.

I think you should give yourself a lot of credit. My dad was a naval architect ( ship designer) and I certainly wouldn’t want to send anyone out to sea in something I’d drawn!

I took John’s advice and played it for a while and decided to keep it fretless. Had to recess the bridge into the body, drop the nut and harden the fretboard with CA glue after fitting maple fret markers. 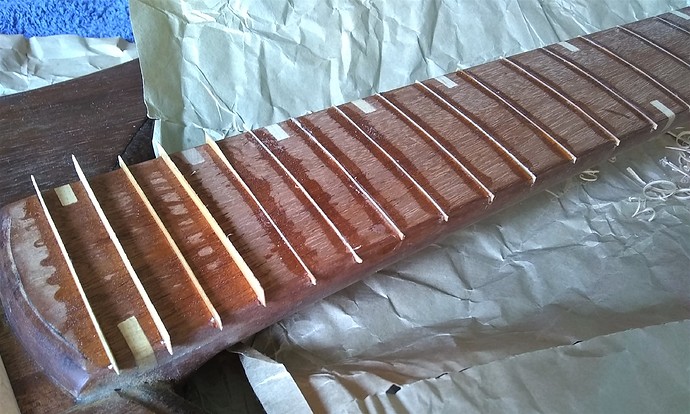 I like the body. The shape has a “Bongobacker” vibe to it.

That is truely outstanding

I look at this in awe as I have zero woodworking capabilities, and, when I dabble, I make kindling.

Don’t think I haven’t made some kindling in the last four weeks.
My real achilles heel is the electronics, I taught myself to solder at Christmas and the first attempt was not only visually laughable but electronically dismal.

I confess the Music Man Bongo was not a design I was familiar with but I like this a lot.

My real achilles heel is the electronics

Love the look of the Bongo. It’s the only product MM makes that I am interested in

This is probably straying into another post but when I made a guitar stand, it had five slots. What should I do ? 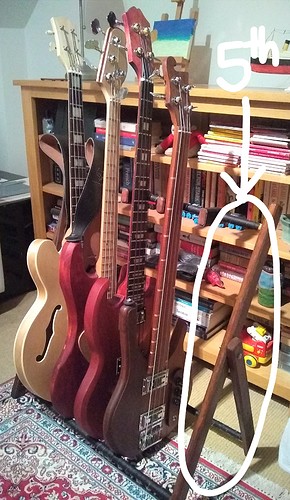