What I don’t understand with most of those gear videos is the choice of bass guitars though. Wouldn’t it be more speaking for the average bassist if the basses used were closer to industry standards. It would be easier to compare sounds of medium range P or J basses for instance

Actually it’s an expensive P-bass too, but that’s just due to vintage. It’s still a P-bass

Just listened again a few times, and even with biases set aside I definitely prefer the X7 over the AO for all styles there, and I think the EBS actually wins overall. Sounds great.

The Le Bass sounds good when he has it in “cold fusion” mode and is boosting the bass on the clean channel, while getting some mid punch on the dirty channel. of course he’s also rocking the Attitude then which I think is the best sounding bass of the three - not that the others sound bad in any way ofc, that 1963 P-bass sounds incredible too, and the strandberg is dual humbuckers into a darkglass tone capsule, tuned to Drop A

edit: checked again, he’s got the same settings on the Le Bass the whole time, so it’s just the Attitude making the difference there in the second song.

One common criticism I am seeing about the Le Bass, and on listening I concur with, is the built in cab sim. It’s overtuned for the dirty channel, so for the clean channel when it is on it makes the tone sound dead, like the worst dead flatwounds you have ever heard. Very little presence, basically defeating the purpose of having a tube preamp.

And then on the other hand, the dirty channel seems to almost require the cab sim because it’s pretty rich in high harmonics. And it’s got tons of presence and generally sounds good.

So, when blending them in parallel, the onboard IR kills the presence on the clean stage. Bummer.

Not really a factor for me because I run my own IR later. But good to know.

But all in all the clean channel of the thing so far comes off to me as… well, kind of boring. Which is too bad but I expected a lot more presence for some reason.

The dirty channel and the fusion modes sound pretty damn good though.

I just love the concept of this thing. This one guy posted a vid swapping out the tube with a bunch of different classic tubes and you can really hear the differences:

Actually relatively decent presence on that one, going in to an external cab sim.

i know almost everybody on earth feels differently but that is exactly why i wish more preamps didn’t have all this clean channel/dirty channel stuff. i mean i do indeed get it if you don’t use effects (come to think of it, probably most bass players don’t even though we all seem to around here). but i would much rather have a pristine clean preamp and just do all my tone shaping externally. have to say i also am super intrigued by this preamp and the cool light show doesn’t hurt one bit (but i am done with preamps, i found mine. well, never say never but i’m pretty certain. i think).

I much prefer single channel amps and preamps (including for guitar).

when covid hit they were supposed to do a shootout with the geddy lee one. they did do a regular review of it. btw, am i the only one that wasn’t blown away by it? and the production of that review vid also didn’t seem to be up to their usual if i recall. edit: here ya go.

Yeah. Ideally there would be a nice, simple single channel tube preamp with lots of presence and color, maybe a 4-band EQ or parametric 3-band EQ, and separate gain/volume knobs so I can overdrive it.

I don’t need a two-channel all-in-one thing with midi and really I don’t even need a DI on it though that’s always nice.

I mean I don’t need any of this, but I find that idea really interesting.

btw, am i the only one on earth that wasn’t blown away by it?

Yeah - I think I actually like the VT Bass DI and BDDI better than that. Which by extension means I like the BDI-21 more, at which point, lol.

It does sound very “Rush” when it is distorting that 'wick at ~6:50 but eh. That’s a very classic kind of distortion so I can see why folks would like it.

im fine with the rush thing. it’s all the rest that was meh

Hmm, watching this again, Erik does get some impressive presence out of it with the fusion modes.

And it doesn’t have a bad tone in it, I think.

Sorry for the chain posting but I am kind of fascinated by this thing (or the concept of tube preamp pedals anyway).

So something here seems weird to me: 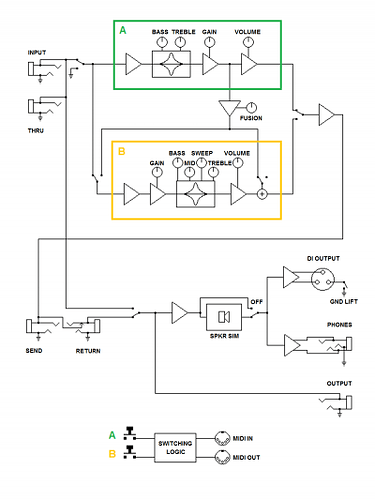 Unless I am reading this wrong, the gain knob on the clean stage is misleading. Both the gain and volume knobs on the clean side are after the tube. The only difference is the gain is before the send to the other channel when in fusion mode.

So basically the clean gain is only the cross-channel gain, otherwise it’s just a second volume control. This probably means you can’t overdrive the clean side at all without an external boost. This might explain why I wasn’t hearing a whole lot of tube sounding presence with the clean side alone in all the demos. There’s some there, but not as much as I expected.

Sorry for the chain posting but I am kind of fascinated by this thing (or the concept of tube preamp pedals anyway).

I’m glad you are doing this, on the other thread too with the Eden Glowplug. I’ve been exploring this same path too and enjoying the posts.

From the tubes topic, on the Tech 21 VT Bass DI:

Good question, not sure about the non-DI version but the DI version also has a parallel out and a speaker sim, at minimum.

parallel out and a speaker sim, at minimum.

Thanks, that was what I was asking.
I don’t even know if I will be getting one anytime soon, but since I find deals often, I want to know if things are worth looking into or not.
I think the benefit of that unit are the Speaker Sim and character that it presents, so that alone might make it not worth getting the unit that does not have it.

Yeah, this is the thing about the Mooer Radar that is kind of a bummer and the place the Darkglass Element really beats it. Basically you want the cab sim to be the absolute last thing in your chain, after the preamps, amp sim, and other effects. Putting it on the DI is perfect.

With the Radar, it needs another DI. So if you use a combo preamp/DI, you’re out of luck for the Radar because now the cab sim is in the wrong place.

So, your choice is to either use the radar and ignore the DI out and amp sim on the combo preamp/DI (and use a different DI later) or use some other cab sim than the Radar.

If the Radar had a DI out it would be perfect.

With the Radar, it needs another DI.

I doubt it. Amp heads need a DI out if you aren’t actually going to the cabinet. Passive basses need a DI. As soon as anyone hits a buffered pedal, I’d be surprised at any problem driving an analogue line input. I have a Radar. I’ll plug it up and see what happens.

I didn’t mean physically need a DI to work at all - I meant if you want to use a DI (which presumably you do if you’re buying a combo DI/preamp).

I actually do need one (ground loop between my computer and my pedalboard) but generally I would assume people buying a preamp/DI combo versus just a preamp have a desire to use the DI.

didn’t mean physically need a DI to work at all - I meant if you want to use a DI (which presumably you do if you’re buying a combo DI/preamp).

We may be misunderstanding each other here. The output of the Radar is essentially an unbalanced DI. It can go to a DAI. However, Your ground loop problem complicates things a bit and likely messes up that concept.

I think the reason most people buy the combo preamp/DI (or for that matter, any DI) is to use it actually as a DI to a mixer in a live setting. Which of course has to come last for you. The Mooer’s output is no doubt fine, and if you aren’t needing a DI at home (and few people will, I’m weird there), then it’s totally fine to put anywhere with its TRS out.

But for the DI use case it would be just a perfect addition to put a DI on the Radar. It’s a really nice feature for the DG to have.