When an alternate tuning is indicated on a score, is it “standard” to notate the score as if standard tuning was used?

In other words, in this transcription: 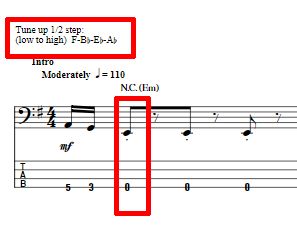 The indicated tuning is F/Bb/Eb/Ab (up a half step), but the 3rd note (shown in the tab as an open "E (tuned to F) string) is shown as an E on the standard notation. With that tuning, you can’t even play an E, but is the idea that the “E” indicates “play an open E string here” even though you’re playing an F?

If so, I guess I “get it” - saves the reader from doing the mental math of seeing the F, and having to remember that they’re tuned up a half-step, so it’s not 1st fret, it’s open and they can instinctually hit the open string. I’m just so used to seeing standard notation actually represent the notes that you’re supposed to play, that it seems a bit unnatural for me to see it as just another version of tab: “a circle 1 ledger line below the staff means pluck the open 4th string”. Like, you’re playing an F there - the notation should show an F.

So is that the deal? The notation isn’t “wrong” - that’s just how alternate tunings are handled in scores?

I haven’t seen this. On the notation/tab combo scores I’ve had experience with, the notation matched the fretted notes. Example: Avenged Sevenfold’s Hail to the King. The bass is tuned to C# on the lower string, and C# on the staff shows open notes, D# shows 2nd fret, 5th fret is F#, etc.

Bass and guitar are “concert pitch” instruments; ie they are not transposing instruments like a sax or clarinet. So I have no idea what is going on with this music here.

Yeah, I thought about it some, and I know that drop-D scores that I’ve looked at have shown the D and the E is tabbed as 2nd fret, so I don’t really understand what’s happening either.

And it’s a Hal Leonard site, so I’m really pretty disappointed unless I’m mis-understanding something…

And I’m fairly sure it’s every song that has an alternate tuning is like this on their site. If it’s not every one, then it’s quite the coincidence that it’s been every one that I looked at…

The only thing that I can figure (other than what I wrote in my first post) is that they write the tab and generate standard notation from it - and that generator isn’t aware of (or doesn’t consider) the alternate tuning.

I wrote to their support to see what the deal is. I just wondered if it was some standard convention that I didn’t understand, being a n00b and all.

Does it come in a file format that Guitar Pro can open? it can easily adjust things like that, though I’ve never tried it on something where the score and tabs don’t match. I don’t know how TuxGuitar or Musescore would handle it, either.

Does it come in a file format that Guitar Pro can open?

Maybe if I pay them more $.

Right now I’m doing a free trial and they only provide the “electronic” version (IE: view on device, no download or print). I know I can pay for downloads of the songs, but I imagine they’re only PDF.

So is that the deal? The notation isn’t “wrong” - that’s just how alternate tunings are handled in scores?

Appears to be … yes.

This one is from Constantine but matches the official book I have as well. 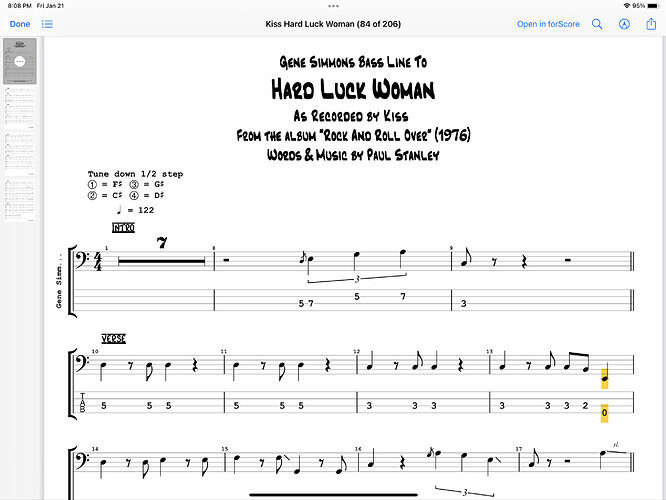 When an alternate tuning is indicated on a score, is it “standard” to notate the score as if standard tuning was used?

Yes, for alternate tunings and using a capo on guitar, most commonly it will tell you the note/position to play as if it was in standard tuning. Consider what you would do if you tuned up/down a 1/4 or some other microtonal steps or used A=432.

Yeah I would guess this is standard. This is how transposing instruments are notated. To pick nits, the standard tuning on a bass guitar isn’t even notated in the “correct” place on the staff in the first place (it’s transposed an octave up).

So the score is treating the alternate tuning as a transposition and the score is notated as standard, instead of showing the actual sharps and flats.

This is more or less how all transposing instruments are notated. It’s also why you have to be careful picking up a score for one instrument and trying to play it on another. 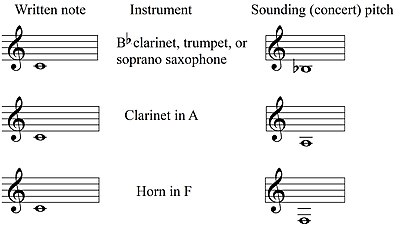 Then why show the D in a score with drop D tuning? Shouldn’t it just indicate the tuning, then show any open-e-string notes as an E in the score?

In that case there’s only one string that is different than standard. It’s easier to keep everything else the same and show the intervals as you would expect, and so notate the D as a D. The whole instrument isn’t transposed in that case, just one string is tuned differently.

In the example you posted, the entire instrument’s tuning is a half step off, basically creating a transposed instrument.