I know throughout a lot of the courses, Josh talks a lot about alternating between pointer and middle finger (in that order). But is it necessary? I.e. can I go the reverse and start with my middle finger then move to my pointer?

I.e. can I go the reverse and start with my middle finger then move to my pointer?

Whatever floats your boat and sounds good.

I am sure that there are many here doing the M I thing.
Every now and then I find myself going the Middle Index route.

Generally, most people start with index finger (pointer as you called it). There are certain scenarios (certain riffs) in which middle - index makes more sense It’s really all about what you are most comfortable with.

I know throughout a lot of the courses, Josh talks a lot about alternating between pointer and middle finger (in that order). But is it necessary?

Some instructors use the M I right from the get go. 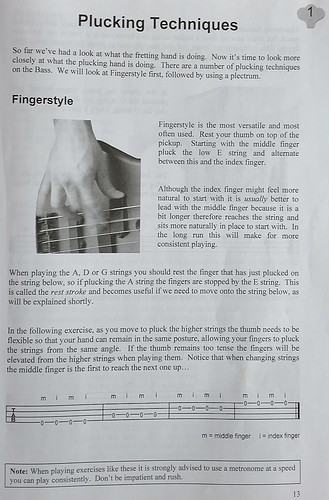 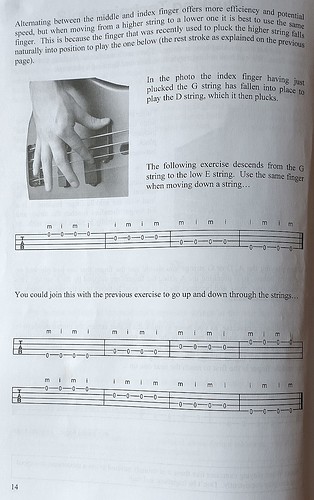 I know throughout a lot of the courses, Josh talks a lot about alternating between pointer and middle finger (in that order). But is it necessary? I.e. can I go the reverse and start with my middle finger then move to my pointer?

yes, sometimes it’s more practical to do that if you’re playing across 3 strings and you want to be on the middle finger for the furthest string.

NO!!! LOL kidding I have seen some very qualified bassists who use three and even four fingers for plucking (Billy Shehan uses three fingers pointer, middle and ring to pluck)

The important thing is that you are able to keep up with the tempo it’s easy to get caught up in minutia with bass I would say explore, experiment, try different things, and have fun!

I find when I’m practicing scales I start with my index going up but coming down I lead with my middle unless I really think about it. It doesn’t affect the sound so I don’t worry about it.

IMO, it’s good to be able to lead with both.

IMO, it’s good to be able to lead with both.

Yeah. There’s times when you will want to do both. As a preference it doesn’t matter, either is fine.

But is it necessary? I.e. can I go the reverse and start with my middle finger then move to my pointer?

That is a great question.

Usually it does not matter, but when it does, you will get a suggestion by Josh, or another instructor, and eventually you will figure it out yourself.

Like Billy Jean, it is recommended you start with middle finger I think.
And when you play something and start using rakes, and what not, you will start to feel yourself getting tripped up, and then you start to analyze where you are getting tripped up. Often I find it is my plucking fingers, and I try starting with the other finger and seeing how that feels, and more often then not, that is enough to stop me from tripping.

So, If I play something that alternate picks, and does it on one string 7 times, and on the 8th pluck, i jump up a string, and then bounce back and forth between 2 strings for a few notes, and then end up on a 3rd string, etc…

If I start getting tripped up while bouncing back and forth between two strings, it is often because the plucking finger I landed on RIGHT before the string jump, feels off.
SO
If I try it by STARTING on the OTHER finger, by the time I get to the string jump, I am now using a different finger then before right before I jump the string.
So
I try that and see if it is more comfortable or natural feeling. often I find that it is, and that is enough. So when playing that song, or that part of a song, or that part of a riff, I start making myself to be very aware of what finger I Start on at the beginning of that part, for a long time while practicing.
Before too long, it becomes 2nd nature and you don’t have to think about it.

This works for me more often then not, but sometimes, you just find a difficult part, and neither finger feels easier than the other, and it takes different approaches to tackling that lick. Sometimes I need to be counting in my head when playing certain licks, because they are hard, and only by counting in my head, can I play the right things at the right time, especially crossing strings, but the first thing I ever try is, see what finger I am on, when starting the hard part, and make sure I land on the other finger before the hard part, and amazingly, it is often enough.

You could forgo it all and just use a pick

TBH I used just a pick for years.

It really helps to learn both, so you don’t stumble when you land on another finger as expected. Ari Cap has some nice exercise ideas for this in her music theory course. Some lines are easier if you start on the m finger, especially if your fingers are different in length.

Sooner or later you’ll want to get to a point where you have your right hand mostly on autopilot with alternating fingers.

However, this is not easy in the beginning and can feel very unnatural at first. Just do it anyway, it pays off!

To make it easier, start with just one version like index/middle and practice really slowly, without skipping strings, with skipping strings, with skipping strings on every note, major scale up/down, minor scales up/down and so on. But go very slowly, only one challenge at a time until it feels comfortable (which can take a few hours or days of repetition for each new level in difficulty). Start with quarter notes at 70 bpm, no string skipping, and set the metronom 5 bpm faster when you feel really comfortable at a tempo. Keep doing this for several months, increasing tempo and adding string skipping challenges! You will know when you’re ready to add the other finger combination to your practice routine.

The more you repeat this the easier it will become and the less you will have to think about it. At least that’s how it works for me.

This is what works for me also.

but whatever one chooses, you want to play it the exactly same way ever time you go through a piece.

However, overall as a rule? Not so much. Whatever’s comfortable and sounds right.

Some more reasons for alternating, at least as a practice tool:

I found it helps to practice strict alternation because I used to sync my right hand to my fretting hand before. E.g. if I played 3rd fret to 5th fret I would very often pick index then middle and vice versa because it felt more natural. Doing it the “mirrored” way seemed extremely awkward at first. So I mostly defaulted to syncing up even if it was less economic (and ergonomic).

The strict practice helped me get rid of that uncomfortable feeling and notion to sync with the fretting hand. This has brought huge benefits in independence of hands, speed and automation of the right hand for me. The fingers just keep going and I now (almost) don’t have to think about which finger to use so I have more “headroom” to concentrate on all the other tricky challenges of playing.

Of course exceptions from the rule are totally okay and can make sense, especially raking, but at least for me it was really good to get real comfy with strict alternation as a default automated way of picking that usually works…

Then again, James Jamerson only ever used his index finger…

Edit: If you’re just starting out I wouldn’t worry too much about all of this though!

Billie Jean is going to be upon me on Saturday…

Thanks for all the advice everyone! Greatly appreciate it!

I actually play with a pick, but the few times that I do use my fingers, I use the same order you mentioned. Nice to know I’m not the only player in the boat