Am I looking for a DAI?

I can’t make my head up.
What I want to do is:
I need a device which takes input from multiple AMPs/Instruments (Guitar + Bass) and outputs it to 2 headphones so wifey and I can play at night and still hear each other.
Currently I am going wild and use the Headphone Port of my Bass Amp connecting it to the Line In of the Guitar Amp but then we only have one Headphone out (on the Guitar Amp).

And if so, are there any cheaper options? 200 bucks jsut to have 2 headphone outs sounds kinda pricey, at least when not using it for recording and other stuff but just placing it on top of my Amps.

You can do this with a DAI, but if all you care about is mixing multiple audio signals down in to a set number of outputs, and don’t care about recording, what you are describing is a mixer.

Multi-input DAIs are also mixers in a way, sure. But are primarily focused on recording. Still, not necessarily a bad choice.

Conversely, some mixers have built-in DAIs too.

If I had the need for more than two inputs I would definitely go for a mixer that I then ran in to a DAI later when needed.

Ah, understood.
So I then would use something like this: 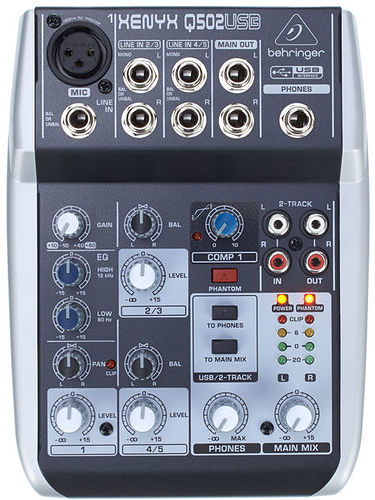 And use the Headphone out of both Amps into Line In of the mixer with Headphones plugged into Line Out on the Mixer?

I’m not an expert on this, but I think it could be possible to combine a cheaper DAI with a headphone amplifier that let’s you plug multiple headphones.

I would not use the amp headphone out for this. If your amp has XLR out, even better would be a mixer with multiple XLR line in (very common) and you would take the XLR out from the amps.

And then you could plug the line out from the mixer into a headphone amp, and plug multiple headphones into the amp, like @Krescht suggested.

You could also do this with a DAI instead of the mixer. There’s a lot you can do. In this case using a DAI as a mixer is not a bad idea either as long as you only plan a couple inputs; it gets more expensive after that.

Note that with a DAI you wouldn’t use your amps at all, just plug the instruments into the DAI and listen on the 'phones. You can do the same with a mixer, if you get DI boxes too; plug the guitars into DI and run the DI XLR to the mixer. But that’s getting kind of elaborate.

The big difference here is the DAI will be fine with an instrument level signal, while many (but not all) mixers will need (or at least sound much, much better) with a line level signal.

Ah I see. The reason why I’d still want to use the Amp at least for the guitar are the build in effects wifey can use. She’d lose that by directly plugging into the DAI.

Sure for recording I can add those effects in a DAW, but int he Living Room just jamming together this would not be feasible.

ahh cool, yeah. So in that case the best bet is using the XLR out on the amp if it has one.

just checked, unfortunately not, FTSW / INPUT / AUX / Headphone is all it got.

Same with my bass amp, minus FTSW.

Hmm. You might be able to run the headphone out into a DAI or mixer but I have never tried, don’t know about the level.

But maybe there are still easier and cheaper solutions available.
… and if you order it online, you can always send it back if you can’t get it to work as you want to.

Yeah even some of the cheapest headphone amps have multiple outs. Mine was like $30 and did.

The UMC202 is supposed to be a pretty good DAI too!

The question is if it will take his amp’s headphone level signal to its inputs. I am guessing it will be fine as they can take inst or line, but I don’t know for sure. Probably fine?

Probably as you can set the input to Line instead of Instrument Level: 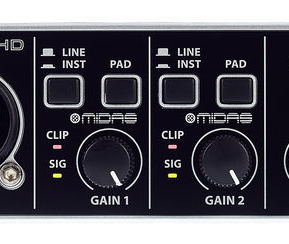 and add a pad

I am guessing it won’t harm anything, just kind of wondering how well it will sound. Probably worth a try at least!

yeah sounds good, adn we even can record with that on PC if we feel like it

Thanks guys, will add those to my wishlist

If it’s two headphones you need, why not this?
https://www.amazon.com/dp/B07431YDWM/ref=cm_sw_r_cp_apa_fabc_EP10FbZKAGZT0?_encoding=UTF8&psc=1

Great Idea! and if Headphone Level is too low I can still opt for a Headphone Amp in between

I’ve used it and I haven’t had any volume issues.

Hmm. You might be able to run the headphone out into a DAI or mixer but I have never tried, don’t know about the level.

I think you were on the right track with the Behringer Xenyx series to begin with. This is what I would buy and I would get as many inputs as your budget allows. This is a combination mixer and DAI so you get the best of both worlds. For example, you could use it stand-alone with something for music playback and also not have to worry about any of the delay nonsense through the DAW. You would also have an extra input for a mic if someone starts singing. It’s not that much more $ for a lot of extra benefit.

The headphone Y cable will likely work fine. Otherwise, I second the HA400 headphone amp if you can’t get enough level. Since it’s at night and quiet, that’s on your side too.

This is OK to run a headphone out into a line in.

If you are going to actually do this, it will require a funny cable. A headphone jack puts both Left and Right channels on one connector and a line input jack won’t expect this. It just wants one channel, so we will need to be clever about how to choose an adapter. Ping me if you get that far.

If you are going to actually do this, it will require a funny cable

Here’s an article about this …

Should you use headphone outputs as line outputs on your line level gear? Sweetwater's expert content team weighs in to put your mind at ease.

Buy a stereo headphone plug to double RCA/Cinch splitter. Get a cable to go between the RCA/Cinch and your mixer/DAI input. You only need to connect one of the two.