Bass Teachers - The Good, The Bad, The Ugly?

The only ugly instructors I have had simply don’t listen and adjust to the student’s needs.

And there are a lot of instructors like that.

My take as an instructor takes the opposite approach and each session is structured based on what the students have decided they want to do in the next session. This is done at the end of each session.

The problem I have is that most of my instructing is to small groups of 5-7 people and I have to be careful that individual student concerns do not sidetrack the whole group.

At the end of a session I tell my students what I plan on covering in the next lesson and ask if they are comfortable with that. If they don’t agree with me I have them pick what they want to cover in the following session, and they vote on it, and I structure the next session along those guidelines. This approach has worked out very well for me over the years.

Hopefully the COVID restrictions will get better and we can get back at it.
In the end it’s all good and we are playing music together.

I married one of my teachers!

And alright, the whole story is my husband has been the best teacher I’ve ever had when it comes to string instruments. I have had other music teachers and coaches both before and after we got together of course, but what I like about how he teaches is that he recognizes when someone is using bad technique versus just making an adjustment based on some anatomical anomaly (like my freakishly long fingers, for example). He can definitely teach beginners how to get started, but he’s always preferred working with intermediates and ‘perfecting’ those little things about playing that trap people in ‘sounding noobish’ I guess, and feeling like they’re not advancing.

I think it’d be a lot for me to say it’s essential for people who go past the beginner level seek out one-on-one instruction, but I would say they’re missing out on that kind of personal stuff if they do not.

Oh! And jamming. Jamming becomes part of the lesson at this level and it’s so much fun to learn a song for the week and play it together. I mean, there’s critique, but playing music with other humans has been the ultimate goal in any of this (no matter the instrument) for me, so I’m happy to hear what the instructor has to say about how I can better mesh with other musicians. Especially bass.

Now, do I recommend marrying your bass teacher? Use your best judgement. It’s been working for me so far, though.

Now, do I recommend marrying your bass teacher? Use your best judgement 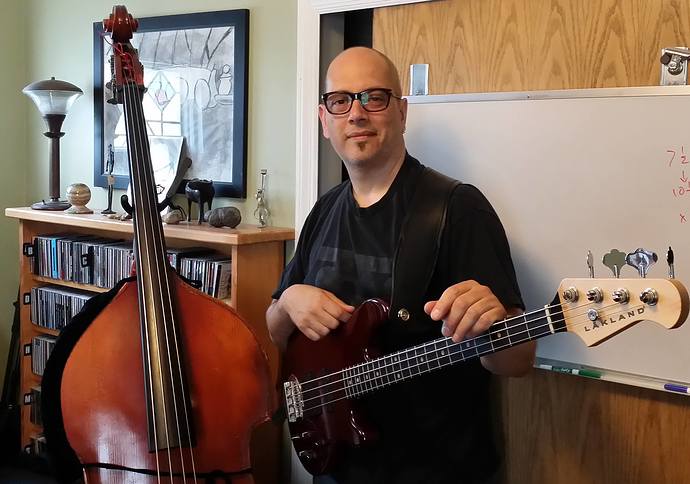 making an adjustment based on some anatomical anomaly (like my freakishly long fingers,

I never had a specific opinion on the length of my fingers, till I tried to learn bass.

Since that fateful moment, my opinion is that they must be freakishly short, since I have difficulties with fingerings that small kids on YT ace routinely without even noticing…

Hahaa, it’s understandable to think there’s gotta be something wrong with you when little kids are all over social media playing this complex stuff. My daughter shows me how much I suck in comparison to some of these kids, daily!

But you know what I’ve found? None of us has the same set of hands – small, big, long, stout, whatever. So throw that out of the equation along with dumb luck in the natural talent department and it’s gotta come down to one thing. And that thing is practice. And part of practice is finding out what works for you!

I remember the day I saw a fellow playing a song I wanted to learn on YT, who also had spider-fingers like myself, and noticed how much shifting he was doing. I realized that just because my fingers were long, it didn’t mean I had to stretch them across four frets all the time and my accuracy was probably suffering because that’s all I kept trying to do. That was the same day I figured out some of my poor finger posturing (mostly getting my thumb to move correctly if I’m honest) was due to not working-out a lot on the G and D strings with the bass.

I watched that video quite a bit and practiced it for a solid week – and darnit, if I could only remember what song it was, you can bet I would post it here to show you guys. Maybe it’ll come to me, later…!

On playing ability - our finger length pales in comparison to simply being an adult learner. It’s just tougher to learn as an adult. Many studies show that when puberty hits our brain starts morphing (into our 20s) to allow for higher order function/thinking (calculus and other esoteric concepts) and we actually start to lose the ability to learn the creative things, most importantly music.
So, with everything else your friendly, local therapist will tell you, blame your parents…for not forcing you to giddy up on an instrument instead of throwing rocks at your friends all day.

My first bass teach was clearly a guitar teacher showing me bass stuff. He just wrote out a bunch of tabs never showed me anything. 30 years later after finishing Josh’s course I went for lessons again and worked with a Bass player who gave me more pointers and knowledge in 2 month’s than I’d had all my life (other than Josh).

+1 on this for music and sports. There are just some instruments and some sports that have a much higher probability of being “lifelong” vs school days pastimes. Having spent time as a kid on alto sax - I look back and wish I had learned piano or guitar. Sax is cool for sure - but I haven’t picked it up since the last day of band class in high school. Haven’t put on a football helmet since either.

But piano, guitar, bass and drums are the core of virtually all popular music and recreational playing/bands - so I would have been much more likely to continue those out of school. Same with sports like golf, tennis, skiing, cross-country or soccer. Those are all very easy to continue outside a formal school program - and golf/tennis/ski are often pursued well into retirement (I’m National Ski Patrol at the local hill and my shift leader just retired - at 83 - ski and snowboard!)

As a parent to a couple very opinionated teens - I’ve tried to steer their interests a bit - one is on guitar and the other on percussion and they’re both hellions on skis.

I had a bass teacher all spring/summer, and while it was fun, I really don’t think I learned anything that I couldn’t find online. It was nice having him watch me play and let me know if I was doing something wrong so he could correct me, so that was valuable to me, but other than that, it was a lot of money and I didn’t really learn anything I couldn’t find online here or other bass sites.

I’m actually going to stop my private instruction for a while. I’ve got so many assignments from him I can’t keep up. Not can I work on the other online and book things I’m in the middle of that I want to complete. I plan to have one more lesson and pause him post that. All his stuff is great. I think I’ll go to quarterly check ins on his work or something. And I’ll be getting back into Sax again now that dental stuff is done.

This got me thinking. The one thing I don’t like about in person is there is no path to see and boxes to tick. I get you don’t want to give someone all the materials ahead of time but if an instructor showed a path with goals etc that might keep folks going

All I really want from a teacher right now is to make sure I’m not forming bad habits, particularly ones that could injure me long-term. I’m not too worried about the rest of the things they could teach. What I really like so far about Josh‘s course is that he encourages you to move on to the next lesson to keep the momentum going, even if you feel you haven’t really mastered the last session. He constantly reminds you that you are not expected to do everything perfectly at the early stages.

@JT Yes. I started taking guitar lessons last year, and one of my concerns was that I broke the pinky on my left hand years ago and it never really healed properly. So I asked if there was some way to minimize the strain on that finger. I also wanted to work on theory, and not just learn to play certain songs. I want to know the “why”, and not just the “how.” Yeah… none of that happened. I quickly realised this guy didn’t know what he was talking about. And I just wasn’t motivated to continue.
Bad teachers are probably why so many people quit.

Bad teachers are probably why so many people quit.

Bad teachers sure do not help the situation. I compare it to finding a good luthier, if you need one.

I have a similar issue with the pinky on my fretting hand and only use it to reinforce the ring finger. I found micro shifts with the fretting hand works just fine for me.

I would also mention the Simandl technique, that is used by a lot of double bass players. There are YouTube videos on it but I have never found one I could recommend.

These are just my thoughts on this and what works for me. YMMV

That’s why i can’t go to guitar center! Because the two 14 year olds brought a friggin setlist and i get intimidated.

I’ve said it a lot before. in person, non-internet teachers might be great for a ton of people. But not everybody. Sitting in a room with a complete stranger and being told to perform something makes some of us break out in hives. Like me, for instance.

I haven’t had a bass teacher, but I’ve had a guitar teacher when I was a lot younger for a few weeks. I also had one a few years ago for a few months.

Both were reasonably good experiences. Don’t remember much about the first one other than doing what I thought was a boring drill, when he showed me what you could play using the technique.

The recent one, I asked how to improvise and considering I had almost zero scale/theory knowledge, he did a great job getting me started. He really seemed to want to push chords and playing like The Eagles though, which although was no doubt helpful, it didn’t really grab my attention as I really wanted to be able to play metal.

Heaps of online stuff, much of which teaches you stuff, but doesn’t really explain the Why or How to use it. Very few play along videos either. B2B has been great with explaining and engaging.

I’ve also found a reasonably good guitar one where you learn a concept and then use it in a short song. Very engaging, just like B2B.