Bassists We Have Met

Hey y’all - have any good/bad/boring (they don’t have to be super-exciting) stories about bassists you’ve run into in the wild? Famous, not famous, somewhere in between? I guess we could include other musicians, too - if I had been blessed with the miracle of running into Prince (who was oh so much more than any one instrument RIP) that would definitely get mentioned.

OK, here’s one: way back in the 20th century, a friend and I went to a Beck show during the Odelay tour with The Cardigans opening. We had been up near the stage during the opening set, and got kinda squashed in the crowd. So after they finished, we went outside for some air, and ran into Magnus Sveningsson, the Cardigan’s bassist.
Here is a pic of us acting cool for the camera: 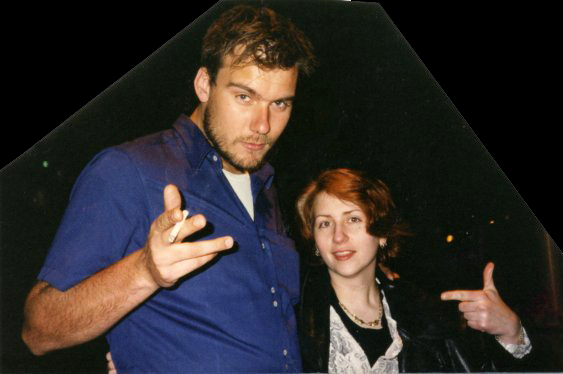 Annnnd here’s a pic of us talking like normal people: 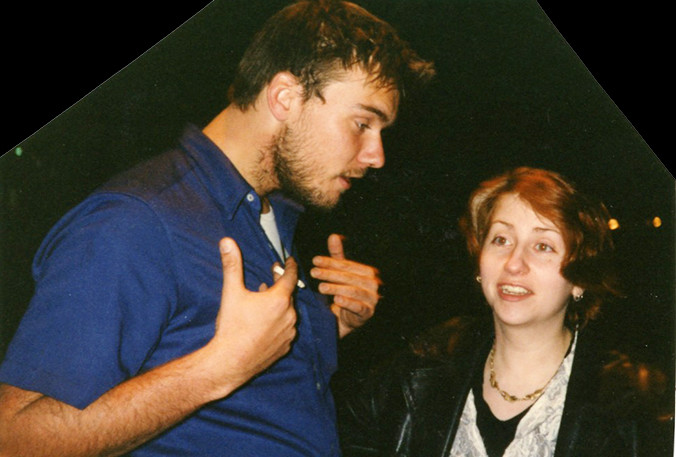 Gene Simmons-KISS-December 27th 1977. I got tickets for the concert and went to it. A friends Mother actually worked at the hotel they were staying at. She had met them before and told us to get there after the concert and she would try to get them to talk with us. We got there about 12am and were sitting in the lounge with his Mom when three of the four walked in and sat down. Paul recognized my friends Mom and called her over to their table. (Ace was not there) Peter went wandering around the lounge talking to people that were there. But Paul and Gene waved us over to their table and started talking. I was a star struck teen (15 at the time) and they were at the height of their powers. I do remember they asked for orange juice, no alcohol. We stayed at their table for about 45 minutes and someone in their staff came and started talking with them so we told them “Bye” and left. They were incredibly gracious and friendly towards us and I am still a fan today because of it.

Michael Anthony- I think this happened in 1994. I was asked to do venue security for their concert (Van Halen) Basically, we just stood behind the front partition that separated the stage from the audience. Our job was to keep fans from getting over the partition and onto the stage. I got to see a lot of boobies that night as young females kept flashing Eddie. I was literally 3 feet from him when he would come to the front edge of the stage, watching him play his guitar. Also, Sammy Hagar got on my shoulders and got a beer from one of the young ladies in front of the stage. It was awesome. Michael Anthony came out before the concert started and thanked us all for being their venue security and went around shaking everyones hand in appreciation. Also, as each member would solo, the others would walk off stage to the side and get water, smoke, (Eddie), or just talk to us. The only one I did not get to talk to was Michael, the drummer. Another awesome night. Michael, Eddie and Sammy were so nice and Sammy in particular was like your best bud.

That’s all I got.

I was young, and a fan of the Romantics (What I Like About You). They came to a local radio station and were giving autographs. I brought an album I had. I handed it to them, and they started looking at it. They kept getting more excited, and one of them yelled “it’s an darn bootleg”. Darn wasn’t quite the word he used.

All the fans in line were giving me dirty looks. I was mortified, being 20 and unreasonably concerned with what others thought.

The band was quite happy though and cool about the whole thing. To them it was a milestone - if someone was bootlegging them they had made it.

They kept the album.

Those are great - thanks for sharing!

I KNEW YOU WOULD HAVE A COOL STORY

They were happy about being bootlegged - that tracks. Love it!

I think I met the bassist for Crowbar, it would have been Todd Strange at the time; they were touring with Black Label Society and after they played, just hung out with the crowd at the venue which I thought was cool as hell. I know I met the band as a whole. But I really don’t have any cool stories about it XD

Non-bassist story: when I worked at a music store, Dimebag Darrel came in Christmas shopping and I was the one that got to show him all the effects pedals. He told me “Show me the most fucked up sounding pedals you got” and pulled one of his signature Washburns off the guitar wall, and then just jammed on stuff for a while, like anyone else does when they go to a music store lol. The same year I also met his brother, Vinnie-Paul, at a local mall also Christmas shopping. He was a bit of a jokester and fun to meet/chat with.

“Show me the most fucked up sounding pedals you got”

This will live with me forever - thank you

oh wait - I should have also asked, “If they kept your album, did they give you anything in return? Did you walk away album-less and autograph-less?”

I was lucky enough to be on holiday in LA about 20 years ago and was sitting on a bench at the shops in Malibu, the GLW was doing what most do, in looking at the shops, not my scene, so i thought i would just sit outside and enjoy the sunshine.
I heard a familiar voice behind me and turned around to see Timothy B Schmitt (bass player from the Eagles.
I nearly shat my pants, and in my excitement i ran to the hire car and grabbed the note pad and pen, didn’t even think of the phone

for a selfie.
Anyway i got back to the Shops and Timothy was walking towrds me holding a cake in a box and i asked him for his autograph, he placed his cake down on the bench signed an autograph for me and we talked about bass guitars.
He was very genuine and friendly to talk to.
That was the highlight of my holiday,
I will dig out the autograph and share with ya all.
Cheers Brian

Long ago back in ooooo… '89 when I was going through my heavy metal phase, a couple of mates and I went to a bass clinic in the back of a music store with Neil Murray - he was then touring with Sabbath on the Headless Cross tour. I was expecting something a bit Sabbathy - skulls and Satan and stuff like that - but he spent most of the session talking about the settings on his amp. Nice guy though, just not the hotel room smashing type.

I got to hang out with Peter Hook (New Order/Joy Division) once. I had a backstage pass to a New Order show more or less at the peak of my fandom. Went back after the show and got ushered into the (very well stocked) party room. I was super nervous; after the bands were ushered in everyone mobbed Bernard Sumner, so it was easy to meet Stephen Morris and Gillian Gilbert, who were sitting over by themselves. Throwing Muses (opening band) were just sitting off to the side so I hung with them for a moment, told them how much I liked them. They were like “do you even know who we are?” and were surprised when I did.

I was wearing an older tour shirt at the time. I hear this “I remember that shirt!” and I turn around, and it’s Hooky and Rob Gretton, hanging out ignored by the booze. He was my hero even then and I was kind of gobsmacked so I don’t even remember what I said; I just hung out drinking with them for quite a while. I proceeded to get very, very wasted. Gretton was really funny, that’s about all I remember.

Never got to meet Bernard Sumner, mobbed by women the whole time.

And funny! Kinda sorta extremely jealous you got to see Throwing Muses.

@TNKA36 yes, please share the autograph when you can!

expecting something a bit Sabbathy

@Ed lol! I do suspect the Devil owns a music store, though

The only group I’ve met are the Swinging Steaks out of Boston. I met them back in the early 90’s, long before I ever thought of playing an instrument. They were very nice, down to earth people. My sister and brother-in-law were huge fans and saw them several times. The band even reached out to her when my brother-in-law passed away.

Wasn’t a bassist, but I met Teri Nunn of Berlin once, in CBGBs. In the late 70s before MTV changed the landscape, you could go to CBGBs and watch a band play. And in the audience would be KISS, or Bondie, Talking Heads, New York Dolls in the audience with you, the separation to celebrity wasn’t the chasm it is today.

Anyway, we had a table, which was hard to come by there. And a seat. Terri Nunn came over, and sat with us and watched the band that night, I bought her a drink, and that’s all I have to remember. She was drunk, I was drunk, no idea what was said.

Seriously too many to list and I forgot most name already too. I had a restaurant on Melrose in West Hollywood virtually next to groundlings theater, and before that I had a restaurant in Santa Monica 2 -locks from the pier. Before that I was an executive chef at an Asian fusion restaurant on los feliz own by a recording studio owner. I’ve attended a couple of NAMM shows so I’ve seen quite a few interesting heroes there.

The most memorable for me is the signed Yamaha BBNE2 that was given to me by Nathan East himself. My ex-boss learned that Nathan was my bass hero so he arranged to get the bass and Nathan came in for dinner after the meal my boss said I want to introduce you to a friend of mine, I don’t remember much after “hi I’m Nathan” all I kept saying to myself don’t puke, don’t puke.

Everything was a blur he showed me the bass and the knobs, I’ve no clue what he said. He played a couple of licks and asked my what my favorite song I said change the world he played this super awesome intro and a little solo, then handed me the bass I just played a a scale or 2 giggled like a little kid he knew I was nervous, my hand was shaking like crazy. Boy do I suck extra in front of my hero,lol. I had that bass for a long time now and I think I only have 30-40 hours on it. It’s now buried deep in my shed.

Quick Anecdote, ran into Leland Sklar at an Apple store in Pasadena I had an appointment to get my phone replaced. There’s a hippie standing next to me and he looked like a diehard ZZ Top’s fanboy. He was talking to himself a bit. I was trying to move to the next table but then I looked up and immediately recognized him, he was such a nice guy very chatty and absolutely no ego.

And funny! Kinda sorta extremely jealous you got to see Throwing Muses.

I was actually a big fan! Huge fan of everything on 4AD at the time actually and still am. This was before they were big at all. I wish I had known, I would have spent more time there.

I do suspect the Devil owns a music store, though

Or at least Spotify