Ignoring personal preferences/styles, I have a two-part question on the proper positioning of your bass while standing (and no, it’s not about the height). The class videos are shot from a slightly-offset angle, so it’s hard to tell how exactly Josh is holding his bass (plus he is sitting). For the below, assume a height level that stays roughly the same whether sitting or standing.

I realize that my reference points are the extremes, and there are several variables that go into picking a position, but I’m just looking for a good baseline position that would put me in good form.

Appreciate any answers. Thanks everyone.

@Robert_520 I suspect all the responses will says it depends…
So my opinion (for what its worth) is that a lot depends on the shape of the bass you are playing, where the neck joins the body, and where the strap buttons are placed.
I made a Fender Precision bass (they are pretty common), the strap button is over the 12th fret and the body is quite thin (compared to a hollow body). So, I put the strap over my shoulder and it hangs at about 10 degrees (using your reference angles) from the axis through my shoulders. When I look down at the neck I see the 7th fret and the axis along the bass is at about 15 degrees up from horizontal, this is so its comfortable to play the 1st fret without bending the wrist too much.

So when i stand to play, maybe less than 15 degrees off absolute zero to the left. meaning for me its right at the angle it naturally sits at. This puts the high end of the neck at center of my torso. Idk of it’s good for anyone else. But it works good for me, a with minimal head movement downward i can actually see the whole fingerboard? That could be because I’m carrying extra pounds around the middle? 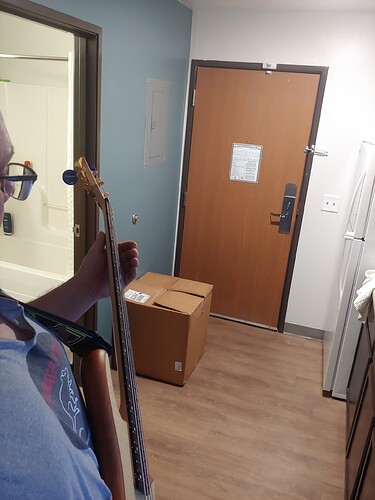 There is no right or wrong, it’s about what feels comfortable to you IMO @Robert_520 .
Cheers Brian

Thanks for the responses guys. I go back-and-forth with my positioning, but your input was helpful.

The photo was helpful ‘autumnsdad1990’. I also appreciated the bit of self-deprecating humor at the end 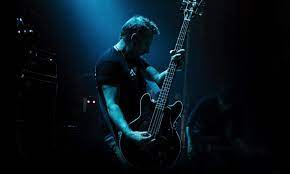 No worries, brother. If i can’t laugh at myself, how could i reasonably laugh at anyone else? Hope you find the spot where you can make it thump! 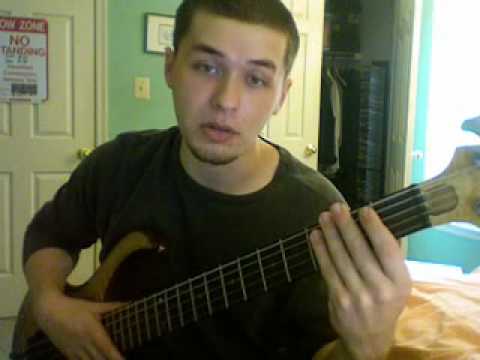 45* headstock angle is the most comfortable for a lot players, a little flatter works too. Personally, I like as flat as I possibly could, I just feels better to me. Well, no just looks cooler, lol.

This depends on where you’re playing on the fretboard, the further you play up the neck, the further you need to angle the headstock away from your body. This is probably the biggest reason people have trouble playing above the 12th fret, they don’t angle the bass far enough away from them. Also, angling the bass up will make it easier too. Just hold your hand palm up and your elbow by your side, move your hand away/towards your centreline and observe the angle that your fingers move through vs your torso.

How far back (to the right for a right-handed player) should the body of the bass be tucked back against your body? This would be much easier to demonstrate with a visual, but since this is a written forum, maybe use a part of the bass (e.g., one of the pickups) and a part of the body (e.g., center mass or all the way to the side) for a reference.

wherever is comfortable. I play mostly sitting off my right knee but I hang my strap about the same height which leaves it a similar left/right and up/down spacing. Some people play off their left leg which makes it easier to access the upper frets.

A bass is not really a very ergonomic piece of kit and we’re all different proportions; you need to experiment a bit to find the position that reduces stress on your joints and is most comfortable for you.

Whatever feels most comfortable. After you’ve played for a while, you’ll find your sweet spot.

Whatever feels most comfortable.

@Robert_520 , I have to agree with Pam most with her statement
BUT
I have listened to professional musicians who play things in studio that they play different on stage, or don’t play on stage at all, due to instrument positioning.
One example I saw recently was Fat Mike of NOFX, when asked about a song and if they will be playing it at a show they were at during this interview, and he said, OH, NO, we won’t play that song on stage, we couldn’t’ pull it off, and I would have to adjust my bass for half the song, cuz I can only play this with my bass up around my tits.

The take another example, guys like Tom Morello and Tim C. of Rage Against The Machine and various other bands. They kind of made the instrument up high a cool look, like 2 scraping a back pack instead of single strapping it, like Revenge of the Nerds, (not saying Tom and Tim are nerds) but I bet they play what they play in studio, on stage and son’t have a lot of things they can’t pull off because of instrument positioning.

If I were a performer, I would strive to create things on my album that I could recreate on live stage, and not be limited by playing position, and I would just go for what is comfortable and what position I can play BEST, but also allow flexibility, because some things are easier to pull off with different positions and different basses.

Playing Death or NU metal with 5 string basses, where a lot of it is played 0-5 frets, with some jumps higher up the neck, that playing with the bass close to zero, or like an upright bass would be easier to play, especially if you want to strap your bass really low to “Look Cool”, where many other songs the bass being closer to 90, or all the way down and away from your body may work for other things, like slap / thumb up and solo’ing when playing all over the neck, especially above the 15th fret all the way up to the 24th fret (or whatever fret your bass neck meets the body at).

I think @Al1885 picked the best starting point with 45 degrees, right in the middle, and adjust from there to play as best and as comfortable as you can.

Basses can be strung low to force technique. Take Dee Dee Ramone. By slinging his bass below his waist, and having to extend his arm to reach the strings, Dee Dee had to use his wrist to play at the speeds he did. He couldn’t do it if the bass were higher. Did it look cool? Sure. Not why they did it.

They could have used alternate picking, but they wanted the attack and only hit the strings on the down stroke. This was how they could pull off 2200+ concerts.

Others may do it to look cool, but there are also solid reasons why you may do it. Lose flexibility but gain speed. Check out Noako on the right, and CJ Ramone and Ritsuko on the left.

Noako hits the strings going up and down, CJ and Ritsuko only hit on the downstroke, and hold the guitars accordingly.