I’ve mentioned my campaign, Pass the Bass, in here previously. Due to a traumatic brain injury, I’m not really able to play. I get bassists to play mine, sell merchandise, money goes to the Brain Injury Association of America. Over 50 have played mine, donated near $30,000. Trying to spread the word, turn it into something bigger. Talked to Karl Alvarez from The Descendents in Vegas last week. Wouldn’t play mine there, will on one of their tours. You have a minute, look up, like, share Pass the Bass 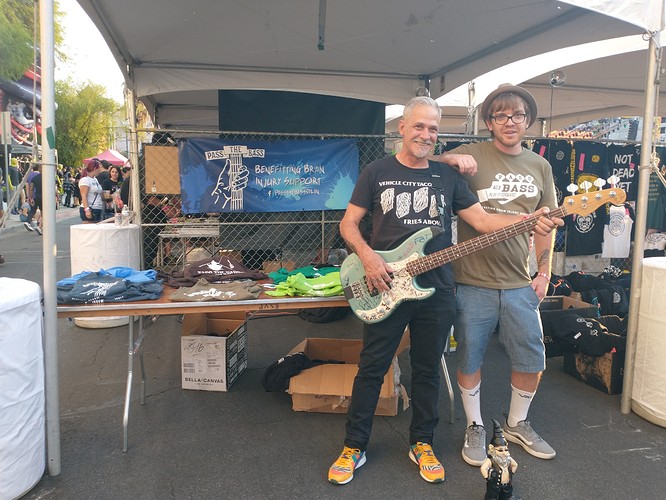 @dylanflynn1984 I looked you up last time you posted about Pass the Bass. Really cool what you’re doing.

Did you modify the bass to add the humbucker at the bridge or did you get it that way?

Got it that way. Admittedly, I know very little about bass. Safe assumption I’d know more if not for the brain injury. It’s a p-bass deluxe. Was told a combination of p-bass and jazz, that Fender doesn’t make them anymore

Great work @dylanflynn1984
As a TBI “recipient “ I can only applaud what you are doing and your dedication/ hard work .

Yep, apparently they only made them from 2000-2009. It not a combination of precision and jazz though. It’s a precision and humbucker. The jazz uses a different pickup. That’s a pretty unique bass for Fender. They very rarely use that pickup design on their basses.

If you can post the serial number I could tell you what year it was made.

I’ll get that number to you later. thinking about it now, though, I was told I believe I was told it was made in 98 or 99 (but my memory is junk). got it somewhere around 2004. I’d always been told a combination of P-bass and jazz. only thing I’ve ever owned that cost me more than $1,000; except my car. once bought an Ernie Ball music man to get signed/auction; thought, potentially, I’d be able to get more it, being a more expensive bass. people said they didn’t agree. shortly after I returned it, got a cheap Fender. you find yourself in Columbus, I’d love to introduce myself. be extremely grateful for you to spread the word of the campaign. got a handful of shirts available on the Brain Injury Association of America’s website that’ll put you on the cover of GQ, have you beating gals off with whiffle ball bats.

appreciate. 6 and a half years since I started this campaign. have a lot more accomplished than I could have imagined when I started. pretty much a one man campaign; though from time to time I do get some help from a couple great guys. spent last weekend in Vegas, raised over $3,300 in three days. made plans to get together with the VP of the Brain Injury Association of America for lunch tomorrow. got some money to donate, think it’d make the total over $30,000. would love, be very grateful, if you have a few minutes for you to look up, spread the word of Pass the Bass

saw my neurologist yesterday, a neurosurgeon for the first time. neurosurgeon said there’s a 50/50 chance I’ll have surgery, fingers crossed get off of epilepsy drugs. have a tentative app on the 27 to go into the epilepsy monitoring unit, do some further testing