I think my career is over before it started. Complete beginner. Practicing along with Josh on the very beginner “plucking” and “fretting” exercises when i realized to my horror that my left hand closes up, almost like a claw, around the neck when trying to fret. When holding the bass, the pinky and ring finger on my left hand move together, almost as though they were taped together- and the ring finger curls towards the index finger. I can really only get my index and pointer fingers to sit properly on the neck. Zero chance of going four fingers on four frets. I wish I knew I was a physiological freak before I started this process- Unless I can play bass with just two fingers, I’ll be sending this baby back. 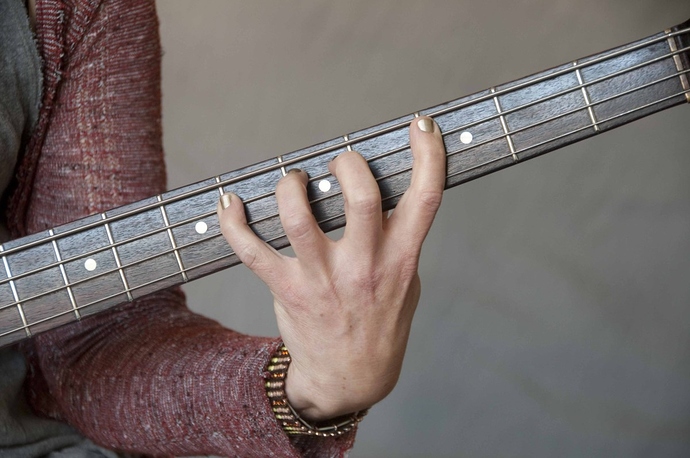 I’m fairly certain it is only Josh that has the alien fingers. The rest of us just try our best.

Really, the key here is not to admit defeat so soon. You are asking things of your fingers that they have never done before. Give it a red hot go for a week or so. You’ll surprise yourself.

I have big hands- but they are useless on the neck of a bass because of the way they close up. Useless. Damn. Is guitar easier play than bass in this situation?

Stick with it. Literally everyone has this problem when starting at it can take a long time for your pinky to loosen up and work on its own - but it will. Almost no one can do the “one finger per fret” thing from the start. Some people never can. It’s not a deal killer in any way.

I found this video super helpful.

This position is simply a physical impossibilty for me.

It’s also apparently not physically easy for the person in the image, because they are fretting incorrectly - note that they have two fingers in the fifth fret, are poorly fretting the third fret, and appear to be pressing on the G string with their pinky.

Don’t sweat this. I can’t do one finger per fret reliably until the fifth fret myself - and it bothers me not at all. My pinky still mutinies all the time too

And when it comes down to it, plenty of bass players don’t use their pinky much. It’s better to, and it is a good skill to develop, and everyone will recommend it, but the Bass Police aren’t coming for you if you just can’t.

Here’s Peter Hook shredding a bass solo with “technically” bad technique, never really using his pinky, hand kind of clawing, and he absolutely rips it up and is amazing:

For alternative and indie rock he’s one of the most influential bass players of all time. If he can get away with it, so can you

Totally agree with everything said already… your “challenge” is not a deal breaker, @StinsonAlliance84, but just that - a “challenge”! And, like also mentioned, likely a challenge you share with many!!

The “one finger per fret” is not a gospel or fundamental law of physics… there are alternatives, such as the “Simandl technique” (borrowed from acoustic upright basses), which works mainly only with index, middle, pinky.

This video here is a little “dry”, but basically talks about the Simandl approach and - importantly - that there always is more than one way to accomplish something!


(Yeah, it’s etudes and stuff - all the things I “hated” when I learnt my other instruments, and that thankfully @JoshFossgreen is sparing us from… but which sometimes still might be necessary to become better…)

I have my own challenge in that I have a condition called Dupuytren’s Contracture (https://www.mayoclinic.org/diseases-conditions/dupuytrens-contracture/symptoms-causes/syc-20371943), which makes it really hard to work with my pinky and I am bound to hit the G string with it, even though I am going for a fret on the A string… Anyway, I try to actually think of playing the bass as an exercise to improve and increase mobility, flexibility and strength in my fingers

@StinsonAlliance84, before you get too despondent, have a little trawl through the forum threads and look for “small hands” issues/comments: there is a wealth of advice & support for folk who believe they will never manage to make those stretches - yet so far we haven’t had anybody come back after a few weeks and say “See, I told you I couldn’t manage”, and we have a few players who have exceeded their hoped-for level of playing.

Some people get there simply by practicing as best they can, accepting that it’ll take a little time to get their hand used to a new routine. Other people find that micro-shifts work best for them. @JoshFossgreen has been playing for a long time so has had plenty of opportunity to improve his technique to that level, but even he will admit that his stretch is at the further end of ‘normal’ (I’m trying not to say he has freakish alien fingers). (again).

I started the course about 4 months ago and for non-music related reasons I’ve had to take a break for over a month now, but when I first started I found that although I could stretch to one finger per fret on a four fret spread, I could only practically do it from about 5th fret and up. After a few weeks I found my fingers spreading more easily, and by halfway through the course I only found the very bottom of the neck any sort of issue - and even then, only for fast changes.

I picked up my bass again on Friday this week and went back a few lessons just to ease back into laying, and I’ve found that the 4 fret stretch is awkward and even a little bit painful, but I know that I felt that way to begin with and this is to be expected after so many weeks of not playing.

Stick with it, don’t fret about it (pun intended), and enjoy the overall experience. The point of each lesson is to push you a little further along the road, but you (probably) won’t be a master of it first time. The musicians’ mantra is “practice, practice, practice”.

Here’s Peter Hook shredding a bass solo with “technically” bad technique, never really using his pinky, hand kind of clawing, and he absolutely rips it up and is amazing:

@StinsonAlliance84 your post looks all too familiar. I posted a similar complaint six months ago, and so have many others, yet here I am still playing, and have become a Bad Ass Bass Gal.
As others have pointed out, you are asking your fingers to do something they have never done before. In time, they will do it, but it takes patience and practice. @JoshFossgreen has extraterrestrial fingers, so don’t worry that you don’t have the same span as him. I still don’t, and don’t expect I ever will. But I make up for it by learning and practicing rapid micro-shifting. You can do it too.
Please don’t give up. You will master this over time. 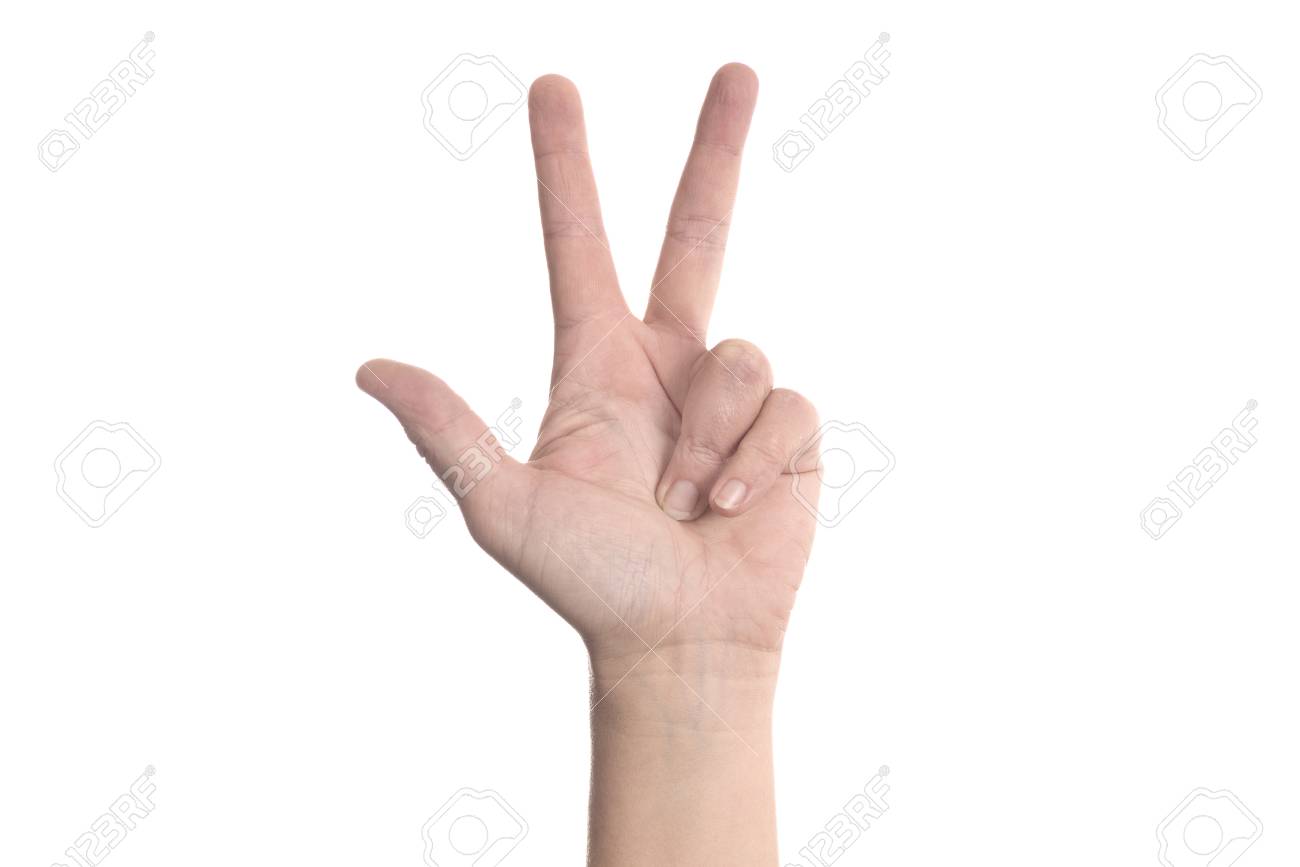 I appreciate the support- but I think it’s physical problem that can’t be fixed over time. This is how I show the number “3”. If I try to touch my pinky to my thumb and do “3” the normal way, the pinky pulls my ring finger along for the ride and they both go down. I think I’m sunk.

I hate to break it to you, but this IS the normal way to express the number 3. The other way (the normal way you refer to) is the number 6 in ASL. If you spread those three fingers, it becomes the letter W. I’m married to a deaf person, so I use a lot of ASL.

Back to your issue…

You need to do stretching exercises with your fingers to loosen up those tight muscles. You can do them while watching tv or even while driving. It will feel slightly painful at first, but after awhile it will become easier. It’s not much different than working out other muscles in your body. Please believe me, I went through the same thing. Spreading out those fingers independent of one another is a challenge until you get them in condition.

Please don’t give up!

but this IS the normal way to express the number 3

It is indeed, especially if you want to impersonate an SS officer ordering beer in a tavern in Nazi-occupied France

(I hope you all get the reference!?!)

This might sound a bit harsh, but before you go throwing in the towel you might wanna read through THIS ARTICLE first…

I think you’re missing the point! I CAN’T do the other type of 3. Pulling my pinky down pulls my hand into claw. I don’t see any models online that show the claw technique for fretting

Got it in one

It is indeed, especially if you want to impersonate an SS officer ordering beer

Actually, it was a beer, a scotch, and a bubbly. (I’m such a nitpicker, LOL)

@StinsonAlliance84 I hope you don’t mind, we’re having a bit of fun here. But truly, we want to help you. Keep on learning and practicing. Stretch those fingers until the muscles hurt, then stretch them some more. I guarantee, if you stick with it, in 6 months you’ll be here giving another newbie the same advice.

I’m such a nitpicker, LOL

With all the fake news nowadays, better get straight to the source