I need to get a performance rig together in a hurry and on the cheap…years ago my rig was a GK 800RB, and a Hartke 410/115…killer right?..but that’s long gone. I’m looking at buying a used Ampeg BA115 100w combo, and then in a month or two buying another one…the plan is to take the XLR out from the first one, and run it into the input of the second…essentially making it a 200w 2x15 econo rig with a bit of kick and enough headroom/volume/tone to keep up with my hard-hitting drummer…any thoughts? Never done this before, but it seems to me like it’ll work…

the plan is to take the XLR out from the first one, and run it into the input of the second…

That’s interesting. I wasn’t aware you could daisy chain amps like that.

Thanks Pam…I’ve been looking into this, and I believe it’s called ‘slaving’…perhaps more common with guitar amps, but taking the tone/sound of one amp and ‘boosting’ it by sending it to another amp…PLUS, I could separate the cabs or stack them or tilt them back, or place them actually behind the drums…

Damn right it is…but why would you buy another amp if you can get extension cabinet? Also 100W might be to low for live playing so I’d rather go with 200W minimum.

thanks Noise…extension cabs are passive, and I need more juice…200w in each amp would be better, I agree…haven’t committed to anything yet…looking at the Ampeg BA115 (100w), or the Acoustic B200 MKII (200w)…both have 15" speakers, XLR line out…but I’m still all ears to learn about this or other ideas…

Thanks Paul, they look great…I’m looking for econo-bass rig, so used is the plan for me…

I’d avoid the BA series based on reviews. Haven’t heard one in person though.

I’m not an amp person but based on the last time I looked in to this, if I were after an inexpensive Ampeg option I would probably look for a used PF-500 head and get an Eden 12" cab for it. Their 12" was reasonably priced and rated 300W@8 ohms, so it should easily take a PF-500 at full blast. Could also get two.

I would also guess you will probably get less noise with an extension cab than running one amp’s balanced out into another amp’s in, since the second amp will be amplifying the preamp noise from the first amp. But I’ve never tried it.

Thanks for the thoughts Howard…well, I’m still in the early stages, so I appreciate the suggestions!
It’s also a possibility that the Effects send could be the line out, and not the XLR line out…that could be quieter…

Yeah check the reviews of the BS’s to decide if they are really for you.

To be honest - the new Ampeg combo line doesn’t do it for me either, based on the samples they have up. If I am buying an Ampeg, I want it to sound like an Ampeg.

Cool! I had this same set up many many years ago. Mine got donated at a time when I thought I would never start playing again.

As for the setup, it sounds like a cool plan. Just a couple of days ago I saw an example of this with two Rumble 500 amps using the send from the first one to the return of the second one.

Good luck on getting this rig together and report back to us on how well it works out competing with your drummer.

I’m going to go ahead and tag @JoshFossgreen and @Gio on this one. As long as they’ve been playing they may have some insight on this.

I’d avoid the BA series based on reviews.

yeah, I had the BA 115 HPT (top of the line, 250w with tube preamp) and I don’t recommend an Ampeg BA because of reliability issues.

here is what fried on mine :

I managed to repair all those things but 3 failures in a row are way too much in my opinion.

About the use of a master/slave pair of amps, if there are effects loops you can send the “send” signal into the two “return” inputs with an Y-cable or Y-box. I don’t really see the point of using a symetrical (XLR) cable for this use.

thanks eric…yeah, this opportunity came out of the blue…back in 2001 some friends were working on a deal with Blue Hat Records and their bassist either quit or wasn’t cutting it…they asked me to rehearse and play the sessions - I was actually touring as a guitar tech at the time with a Country artist - it was a blast, and although I’ve kind of kept in touch, ( another band ended up getting the deal) we didn’t play together again…until I got a call recently about a ‘reunion’ gig - 4 actually - so I’m not in a position to drop a pant load of cash on my former touring-rig-quality gear, ( I previously toured a bit as a bassist and BGVs for ‘new’ country artists, back when the labels would put a band together and throw new guys out on big tours as openers, and one night you’re playing an arena, and the next you’re at a festival…)I’m definitely going to want some headroom…3 Marshall half stacks and a drummer who can really play…

thanks terb…I’ve read about the Ampeg combos heating up some…I’ve also considered the Promethean (sp) 300W combo too…lighter weight 15" cabs, and a fan built-in for the amp…that could be a possibility as well…2 of those would be 600w and 2x15’s…these are all great posts folks…

I almost bought a Promethean P3110D, but that was 300W into a 10". It was a totally cute tiny 300W cube though, great little amp. Plenty loud. The domestic version here has a detachable head too. 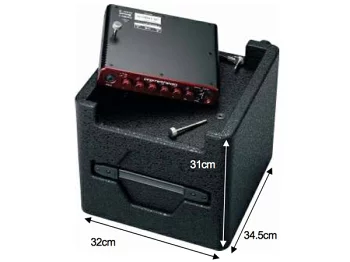 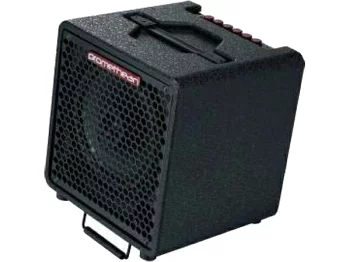 I really like this compact cube format, and I love the idea of a detachable head. a similar thing in FRFR would be great for us.

Thomann has them, it turns out:

except it’s not the D model so the head isn’t thumb-bolted on, looks like normal bolts. Still probably comes off with a little creativity but not normally detachable.

yeah it doesn’t look like the detachable version. that’s strange, I don’t understand why they would have done a fixed version.

What about Hartke combo amps? They are not uncommon second hand either.