Just wondering what sort of specs people are running when recording/mixing music. I’m still new to it all and currently intend on using Reaper, EZdrummer 3 and a few plugins (some from Neural DSP + some others). My laptop is about 10 years old, maybe older. I’m somewhat familiar with specs, but just wondering what others are using.

Thinking of getting either a new laptop or waiting until my son needs one for school at the end of the year and taking the one he current uses for homework and web based games.

I’m looking at CPU’s that range anywhere from about 16,000 to 24,000 on the CPU benchmark site, but don’t know if that’s overkill. Also considering 16GB RAM and understand that most modern laptops won’t let you upgrade (or not without a lot of effort). My old laptop allows you to change the hard drive and memory and I’ve already replaced the HDD with a SSD which helped (got a low capacity one though so already run out trying to install EZdrummer 3).

I don’t really play PC games, but considering a gaming laptop as I may start playing some.

My machine is a core i5-8600K (10,205 in their benchmark), 16GB RAM, with a GeForce GTX1070ti. Far from cutting edge or max spec but more than enough for mixing and mastering, with many tracks and plugins active, and usually several virtual instruments.

Also works fine for current AAA games, though the 1070 is starting to show its age.

More RAM never hurts but there is no memory pressure so far.

CPU has not been limiting yet. But faster never hurts.

Reaper doesn’t really have minimum specs, as it should be able to run on any computer.
Even a 10 year old one should work.

What will be different on a lower specced computer is that you might not be able to use as many tracks and as many effects as on a beefier one.
But I think your old computer would be fine for using Reaper if the only thing you want to do is record some bass track with a few effects on it.

Having said that: Regarding a new computer, this is what I would be looking for in a Laptop:
I would aim for at least 16GB RAM. If games are to be played, the graphics cards needs its own dedicated VRAM (there are some cheaper laptops where the graphics card is using the system RAM). Also you should be looking for something with a GPU from either nVidia or AMD.
For Reaper, the GPU isn’t a factor at all. I know of nothing in there that benefits from the GPU.

What you will need for games exactly is very dependend on what kind of games. But in general, you won’t be able to play games with high requirements on any laptop with all the bells and whistles on. Gaming laptops that claim to be able to do that aren’t very mobile, they are huge and heavy (and probably loud).

Thanks Howard, have seen quite a few with scores around that level as well. End of financial year sales are starting so might be able to get something soon.

Thank you Malyngo. My old laptop had some issues with the Neural DSP plugins but I think that was because it wasn’t in full performance mode (ie at least some level of battery saving).

I haven’t played PC games in years, but would like to be able to play Forza Horizon 5. Had thought about a new Xbox for games as I used to play my Xbox One. Will see what I can find and do some more research.

I got a Mac mini m1. It’s great for any productive related stuff. For gaming I would get a dedicated machine. Laptops tend to make a lot of fan noise when pushing the gpu/cpu but on the other side they are small and mobile.

Your CPU is probably fine. Audio processing isn’t very processor intensive at all compared to video. Think about all the processing a tiny chip can do in a modern $100 multi-effects pedal like the Zoom B1 Four even when it’s applying up to 5 different effects.

4GB of RAM might be an issue though - Windows is now so bloated that 4GB is barely able to cover the OS’s overhead.

GPU doesn’t matter even a little - unless you want to do gaming like you mentioned. Gaming = rethink everything - and you’ll get way more price to performance with a desktop. Any setup that can run a game from the last 3 years or so will do audio processing in it’s sleep.

If I were you, I’d give it a go with your current laptop and see if you hit any limitations. And if you do - replace your RAM with 16GB and see if that solves it. (10 year old RAM should be cheap on eBay).

If you want another labtop, this is the Framework PC. Its modular so you can replace any part to be faster or more to ur needs. they also can send it you for you to build for a couple hundred off lol. 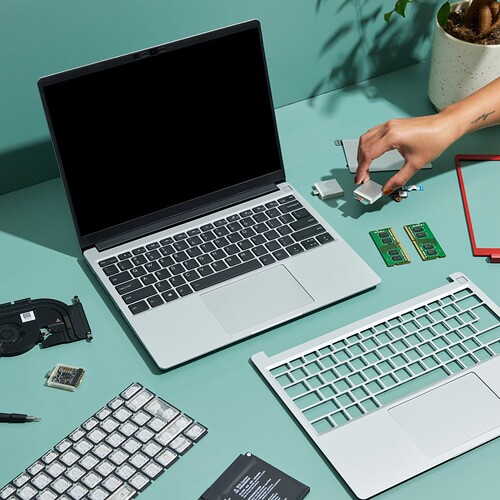 Sounds pretty cool, not sure when they’ll be available in Australia though. It says not taking pre orders for my country.

I’ve been using Logic Pro on my MacBook Air MacBook Pro as well as both of my Mac mini one was the older gen and the other is M1. Have no issue at all except for a little longer wait.

I don’t do anything too fancy with plug-ins and been too lazy and just use both my iPad Pro first gen and M1 with GarageBand and it’s been pretty awesome too. Tablets while not as powerful, it’s so convenient. I haven’t had any problem with any yet. Though I have not used EZ Drummer.

Nice. I’ve got an iPad but don’t know of anything close to EZdrummer. I could still use for recording the bass and guitar though. Haven’t got anything other than the free software versions including Garageband of course.

I’m running this with 16GB of RAM and SSDs:

Never breaks a sweat, the only thing I’ve had any issues with is the Waves vinyl sim. That thing ate CPU like the proverbial “fat kid with cake.” My main SSD is NVME Gen III (Samsung 970 EVO 1TB), so something like 3500MB/s or something in that range. RAM was the fastest my CPU could handle, I don’t recall the specs off the top of my head. All other SSDs are SATA 550MB/s or whatever SATA can handle.

Just so you know what an at this point several year old CPU is capable of. Some higher-end modern laptops are NVME by default, too. I haven’t tested my iPad for recording, but it handles amp sims very well; Bias FX 2 is about 20% running a dual path amp rig at 64 samples. The same patch is 10% on my iPhone 13 Pro Max

Modern processors pack SO much power. Unless you’re gaming or doing really heavy video editing, a modern i5 or i7 is overkill for just about all other applications.

My main SSD is NVME Gen III (Samsung 970 EVO 1TB), so something like 3500MB/s or something in that range. RAM was the fastest my CPU could handle, I don’t recall the specs off the top of my head. All other SSDs are SATA 550MB/s or whatever SATA can handle.

I had a thought that might work well for audio production: ram disk.

I use ram disk for video/audio transcoding and it’s incredible. I’m not super savvy on the specifics - but basically its software that treats a part of your system RAM as if it were a hard drive. You do need a fair amount of RAM though - say 16GB and up. Because RAM is still MUCH faster than even the fastest SSD - ram disk can give you a huge performance boost. The caveat of course, is that RAM is volatile and clears when you power down - so it’s not very useful for many tasks. But if your application creates temporary files while it’s processing (like audio/video encoding does) then a ram disk setup will be a huge performance boost over SSD.

You just need to find out where your application stores its temp processing files, and then change the config to put them on the ram disk and not your HD.

Most modern are probably ok, but huge variation in performance with CPUs though and they make it very difficult for the general population to understand. You can still buy some pretty average i5 and i7 based machines.

Bit of a minefield at times

I had a thought that might work well for audio production: ram disk.

This would probably only help if your software can’t use all of your RAM, so if it is 32bit, can only use 4GB of RAM and you have more.
Otherwise, the program would use the RAM anyway instead of temping them out on a disk/ssd.
Well, at least it should. It might be worth a try, the program might temp out even if it has RAM for days, and then it might help.

Samsung’s Magician software can enable this, I think, though I forget what they called it; I did it with my 850 Pro until I replaced it with a 970 EVO NVME. It hasn’t offered me this option with the NVME SSD for whatever reason.

Samsung’s Magician software can enable this, I think, though I forget what they called it

What you mean is probably the RAPID mode. This is using some of the RAM to cache frequently accessed files, so only read access benefits from this.
It has less and less of an impact the faster the SSD gets. That is why they probably aren’t offering it on newer SSDs.

Oh, and modern OSes do this, anyway.

Yes - you have to do a little research to know what you’re looking for if you want top notch performance. Usually current or two generations back will easily handle brand new software.

For those who want an ultra quick primer on Intel CPUs: i9>i7>i5>i3 within the same generation. Generation is designated by the first two numbers after the processor type. so my i7 11700 is an 11th generation CPU. 12th is the newest. The caveat is this: an 11th gen i3 will smoke a 4th gen i7. So if you’re going to compare older CPU’s for some reason - do the research. And prices are wonky - you can’t count on more $ = better performance. You’ll see a 6th gen i7 thats much more expensive than a 10th gen i5 even though the newer i5 is way more powerful.

Software lags behind processors just a bit and good programmers tweak things to take advantage of the capabilities of the newer generation CPUs. (Not all programmers do that of course.) It’s actually quite rare for programmers to get out ahead of the hardware (remember Crysis?)

It works specifically because programmers are very leery of taking up too much RAM. If your program maxes RAM - and then Windows attempts to fire up some background process, the whole system grinds to a halt or freezes. So programmers set some limits in order to leave RAM overhead. Good programs analyze current RAM use from all programs and adjust so they leave overhead. Not so good programs just limit themselves to a proportion like 50% of total. So if you’ve got 16GB, they won’t take more than 8 - even though overhead might need just 2 and that leaves 6 doing nothing. If you put 8 of 16GB into a ramdisk, now the program will limit itself to 4gb (50% of 8), overhead will still be 2 and now only 2GB is sitting around doing nothing. The RAM your program is using w/o ramdisk = 8GB and with ramdisk = 12GB. 33% increase.