Do You Remember When?... Our Music Memories

Music has always played a huge part throughout my life. Many of life’s instances and circumstances (for me) are related to the music I listened to at that time. Being a Vietnam Vet, it is (to me) even more so…

This year as a Christmas present, my wife Connie picked up a copy of the book “We Gotta Get Outta This Place” by Doug Bradley and Craig Werner. Funny thing is that when I completed the BB course in the fall of 2019, THAT song by the Animals was one that I wanted to learn on bass before the end of 2019 because of what it meant to me. I did cover it and posted it one year ago on January 1st… I’ve also covered MANY songs that meant something to me from that era… Every one a memory of musical masterpieces that paint a picture of my entire being here on planet earth…

Even though we may all play bass, some of us (myself included) play other instruments, and I’ll never forget the times I sat around with my buddies strumming out chords or picking out notes to CCR, Animals, Dylan, or even tunes that we created on our own that at least “brought us back home” - even though we were miles away… Good memories - yes… Bad memories - yes too… but, “music” IS the memory that we will always relate our lives to… Now isn’t that a GREAT thing?..

@Griff Lanny, I’m 100% in accord with you on this. I too tie many of my memories to music. Being that I was a child in the 50s, a youngster in the 60s, a Vietnam vet in the 70s, a wild, wanton slut in the 80s (I won’t get into that), a parent in the 90s and beyond, and now a granny: I have many memories… everyone of them tied to a song or two. Learning bass has really helped me in many regards.

Great post! I’m sure there’ll be lots of comments.

We Gotta Get Outta This Place – The Sarcastic BADASS

Not my best now @PamPurrs Pam… Hell, that was an entire year ago!!

Gigs that went wrong, getting stiffed at the end of a gig, watching a fight between a guitarist and the singer over who is trying to upstage who, the feeling when performing one of my songs, actually going on automatic during a solo (what a feeling), the inevitable well meaning drunk guy coming up and telling us we “could make it”, the girl that came up and told me that the solo moved her so much she peed a little…memories good and bad that spring to life when a certain song pops up. People talk about letting it play and not leaving the car until a certain song has finished, I’ve been known to pull over because I don’t even want traffic as a distraction. BTW a friend found this pic and sent it to me recently that is me on guitar circa 1978 or 79… 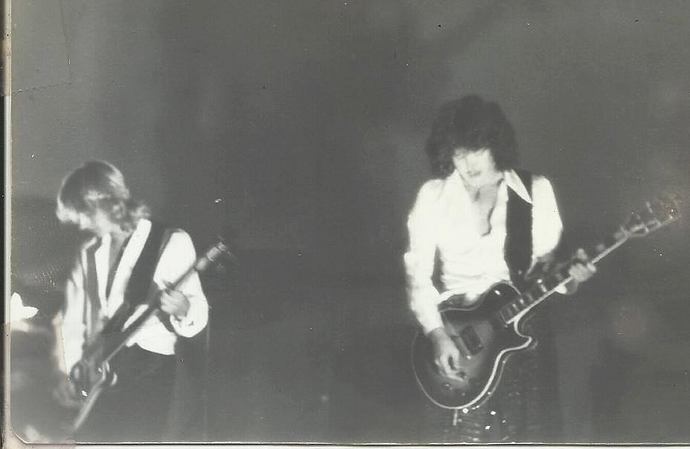 Some great photos @Griff. Man you guys look so young!

I glanced at the photo @Tokyo_Rat and thought it was a picture of Thin Lizzy !!!

Man you guys look so young!

Almost 50 years ago @mac… Yup, we were ALL young and in our prime… Yet, we were ALL old men… We grew up rather quick in that war…

Music memories… THATS what it’s all about @Tokyo_Rat…

The last cover I just did - Temptation - so intense of a memory attached to that song. A girl, of course - and the world’s messiest breakup. Appropriate since the song is about a lost love, which didn’t dawn on me until after the fact. My favorite song at the time, I couldn’t listen to it for years and years afterwards without immense pangs of regret. Feels great to have it back.

I have always built memories around songs, not just when I was younger. Often it’s just stories I make up daydreaming. I have entire playlists that are like soundtracks to these stories, in long plot arcs. And when I hear the songs it brings back the stories. I’m probably crazy AF but it’s kind of cool so I go with it.

My music memories mainly involve my father, before I even got into my teenage years, I was basically my Dad’s roadie; hauling PA’s, two heavy ass Bandit 65 amps, guitar, etc. He was mainly into Country and Southern Rock.

Occasionally, when we set up at his gig, he occasionally let me play for about a minute for a ‘sound test’. I can remember being mesmerized by watching him pour sweat out playing as hard as he could. He eventually got published on a small-time record, and got as far as playing underneath Waylon Jennings at a concert. A combination of family issues and work ended his music career.

As a teenager/young adult I hung out with an older group of guys, and I would jam (badly) with them at their place. They were more into metal/hard-rock, which my spectrum mainly lies today. They gave me pointers and treated me like one of the guys. I’ve been around music for awhile, and there seems to be an awful lot of gatekeeping (the right gear, the right look, the right music, etc.)

I never really cared about that and still don’t, lol. Like what you like, and if people don’t like it, as Lemmy would say, “Tell them to go to hell; do what you like.”

That happened to me with Stevie Ray Vaughns’ “Cold Shot”. Was ex-gf’s favorite song, and a messy breakup whenever it came on, I’d always shut it off because I didn’t want to hear it because of such a strong memory attached to it.

Nowadays I don’t care; I can’t deprive myself of listening to Stevie any longer. xD

Amazing how much of a gutpunch it can be

Took me a really long time. In a way doing that cover is what completed the cycle for me. And led to a lot of introspection while doing it that was all good.

Ahh yes… the memories that song brings to mind. Being a bit younger, I remember listening to it on my transistor radio with Cousin Brucie as the DJ on WMCA 570 AM in NYC.