Hi All
Jules (my bass acquisitions monitoring officer) is learning the drums. At the moment she is learning the Bossa Nova.
I thought I would learn the chords of “The Girl from Ipanema” so we can jam together.
So far so good.
There is one bit of the chords I don’t understand. There are Gb7 throughout the song and then there is a F#m7 all of a sudden.
Is that right? Surly it should be a Gbm7 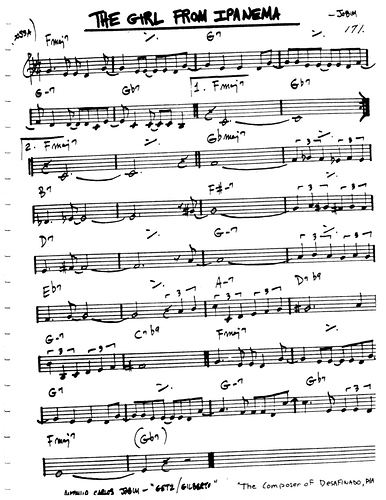 At a guess, probably something to do with the A that is the third of F minor - it’s already been flattened once to make it the third of the G flat 7 (which is a major chord)
As I say, I’m just guessing - but that’s my guess.
I can’t make out what the key is, which doesn’t help.

‘Corcovedo’ by Cannonball Adderley always reminds me of that btw.
A bitching tune.
A real bad jam.

There is one bit of the chords I don’t understand. There are Gb7 throughout the song and then there is a F#m7 all of a sudden.
Is that right? Surly it should be a Gbm7

You are right to a point. To the listener, it won’t matter how you spell it.

Same sounds, different spelling.
Spelling and grammar are analogous to chord spelling rules. It all depends on how the composer thinks the chord is relating to the musical/harmonic/tonal environment at that point in the song.

When the song moves to the bridge, it moves out of the key of F (where the Gb acts as a flat 2 chord, which is a common passing tone to the F, which is our key center. A sharp 1 chord would be grammatically rare and tricky.)

At the bridge the key shifts to E, so the B7 and F#min7 are written to reflect the shift in key center. The irony is that in the melody, the transcriber writes Db and Eb in the melody… which don’t relate to B7 at all.
To support the B7 chord, those notes should be written as C# and D#.

These old fake book charts are that - fake books. You’re reading a player’s transcription with all of their mistakes/eccentricities/grammatical errors.
Later versions - where they actually pay publishing royalties - are usually more edited and vetted.

But! This will get you through the tune!

Hope that clarifies something.