I have a Fender Rumble 100 amp arriving this afternoon. I’m trying to sort out in my mind how I connect bass, pedals, amp and the Focusrite Scarlett interface.
The main thing I am not sure of is this:
The amp has an aux in jack into which I can play (for example) Tidal tracks from my tablet. Will the aux audio also get combined with the bass guitar, and be returned out of the amp’s XLR line output? Or is the only thing that comes out of the XLR the bass guitar plus any amp effects, but no aux in sound?
If anyone can clarify this for me this morning that would be great, cheers.

Hi @Mark_UK,
What are you trying to achieve with this set up?
Cheers Brian

Yes, the audio from the aux socket is routed to the XLR output along with the sound of your bass.

Hi Brian @b.s.excavations, I’m just trying to work out, if I take the XLR output of the amp back to the Scarlett interface, whether I would be getting the bass guitar only, or plus the aux in track I am also feeding to the amp?
Just trying to understand the internal ‘logic’ of the amps connections

Thanks for the confirmation @AlexM! Much appreciated.

Hey Mark, I’m not sure with that technical stuff myself, @howard would probably know.
When I am recording my covers I don’t play through any amp.
I plug the bass straight into the interface into the computer.
I have the audio track set up in daw and listen to it through headphones and record to that.
I spent this afternoon recording my next cover and doing the video at the same time using
Photo booth.
Hope it will make it easier to sync the bass with the video.?
Cheers Brian

Thanks Brian @b.s.excavations, I’m looking forward to trying it all out and seeing what work for me.

What I would recommend doing is take advantage of the fact that the audio interface is both an input and an output, and don’t use the aux in at all. Instead, run bass->amp->DI out to the DAI input. Then for the audio from your computer or tablet, output it through the DAI and send it to a set of speakers or headphones from the DAI audio out.

That way the only thing using your bass amp is the bass.

The only problem with this is audio interface latency. This can manifest because the computer is playing a track in your DAW (or whatever), which takes a few milleseconds to play out over USB through the DAI, and then you play back in through the DAI which A/D converts the sound and sends it back over USB, which also takes a few milleseconds. So when it finally gets to your DAW, it will be shifted by a few milliseconds from where it should be.

This is trivial to correct for (in most cases you just grab the recorded track in the daw and drag it a few milleseconds to the left until it aligns with the beat) but I mention it in case you try recording this way and then it feels like your timing is a little off. It might just be latency.

The same thing happens when playing sounds directly from the sound card in your computer but the latency is typically a lot less.

Thanks @howard, once again very useful and comprehensive advice.
I am going to go for what you suggest, and route via the DAI.
The only downside is the need for monitor speakers connected to the DAI, but I think that’s probably the way to go as I want to avoid headphones as much as possible.

Just trying to understand the internal ‘logic’ of the amps connections

Fender makes a visual for figuring out these types of questions. If you follow the line from the aux in it gets mixed into the guitar and sent out the XLR together. 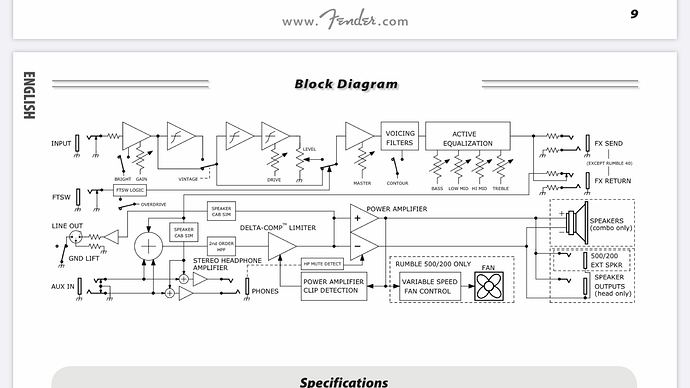 Thanks @DaveT for posting that.

The way I have mine setup is:

This wouldn’t apply to your setup, but I also have an RCA plug going from the line out on the DAI to the AUX in on the amp. This is because I also have the drum machine plugged into input 2 on the DAI and this allows me to hear it through the amp

Thanks @PamPurrs.
The rumble has literally just arrived, so that’s my evenings entertainment!

The rumble has literally just arrived, so that’s my evenings entertainment!

Prepare for some awesome sound! (I hope you get on well with your neighbors)

returned out of the amp’s XLR line output?

I have tried this, but can’t get it to work. I just use the Effects Loop send back to the DAI and it works just fine.

@howard Would there be a benefit to bringing in the additional audio track in with the bass as an analog signal on another channel (if one is available; in my case have a Scarlet 2i2). In this way everything could be theoretically in sync. Would there be a reason not to do it this way?

EDIT: sorry, I was still waking up when I read this and somehow missed the second channel part of your post, sorry! Yes you absolutely want the backing track on a separate track when recording and using a multi-input DAI is one way to do that. However, I would generally just load the backing track audio on the computer as it’s (a) easier and (b) avoids unneeded A/D conversions. It’s very easy to time correct a track in the DAW if it has a constant offset due to latency, and some DAWs do it automatically. Also, while playing back and overdubbing the tracks from the DAW, you will still potentially have the latency issue.

Original reply about why to avoid single-tracking in a DAW:

There’s actually a huge disadvantage to having things on a single channel.

If you were using the DAW software just as a single track tape recorder this would work. But that’s generally not how you use the DAW.

You can kind of think of a DAW as a multitrack recorder with infinite tracks. You want each track to contain as little as possible, ideally just one thing - the bass, the vocals, the drums, etc. This allows editing and applying corrections to them separately - i.e. “I need to bring the volume of the bass up in this section”, “I want to re-record the bass on this part”, “oh crap I EQ’ed away too much of the backing track”, etc.

For this reason, usually you would want to at minimum put the backing track in its own track, and your bass in another.

It’s not unusual for there to be many tracks in a project. It is VERY unusual for projects to contain only a single track with everything in it. That’s called a “mixdown” or “rendering” and is the final output of your work in the DAW, exported to mp3 or whatever. But it is an extremely inconvenient way to work on things in the DAW.

Here’s a random image from the 'net of a garageband project for a song, to illustrate this: 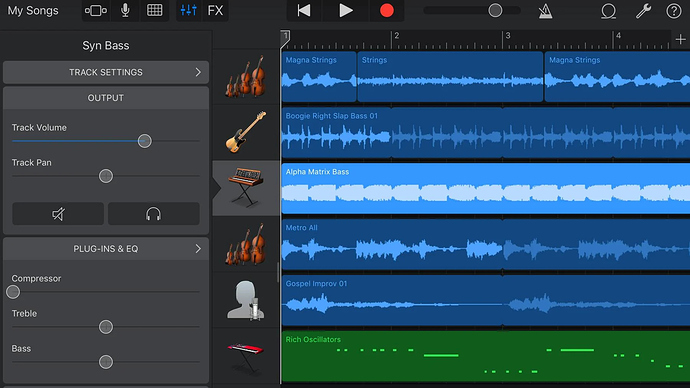 If that was all a single track they would not be able to adjust the volume of just the Synthesizer, like they are doing.