Thanks for posting that. Here’s mine that I posted a year and a half ago. 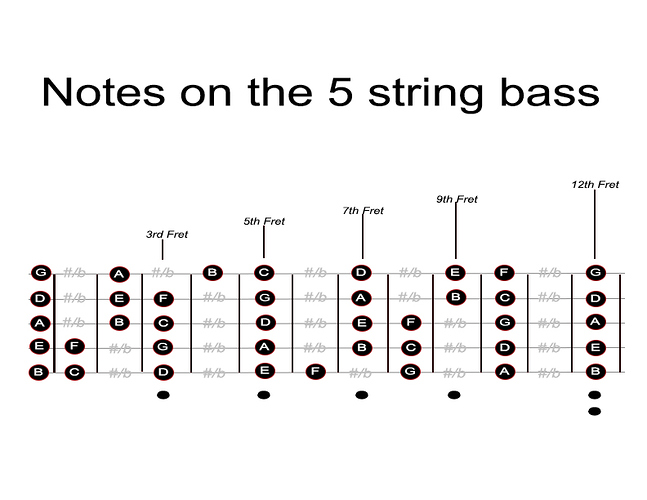 very cool that people take time to do this for others

Thank you! Really my pleasure.

You’re welcome! I will try to find the time to expand it to the 24th fret.

expand it to the 24th fret.

As far as the notes yes but as a visual reference it helps to have the corresponding fret numbers 13-24 to be able to visualize the whole fretboard. Can’t help being an designer…

When I designed mine, I considered doing that but didn’t. I figure people are smart enough to just add +12.
But, if you want to, go for it.

Yes, I want to. It has to do with UX design and not with how smart people are. I’m actually doing it for myself and I’m simply sharing it. Thank you for your input.

Thank you for your input.

That’s nice UX designed view, thanks @franx
It’s still visually easier and more pleasant for me this way, allthough I would suggest to only use it as reference: be sure to memorize the fretboard in the long run you can more easily play that way.

You are absolutely right. To memorize it is really important. I have a color print on the wall and I look at it when I have doubts. I liked that when I color-coded the notes I saw the pattern and repetition throughout the fretboard.

Agree, yet I’m using it on the same tablet that I use to work through the courses

I play games while practicing to practice the notes on a fretboard like
I will start with C then playing every C on the fretboard up and down like a speed drill. then switch to another note always saying the note outlaid while playing it (Sounds funny I know) but hearing the note, saying it, and seeing it as I play it seems to activate all of my senses and drives it to memory. I had to do the same thing when I got the 6 string

It’s nice, as long as it’s only used as a study aid in the early stages of learning, and not as a crutch. Nothing beats daily practice (such as the cycle of 4ths) finding the notes on the fretboard, and learning the logic of where all the notes are in relationship to one another.
I made a similar chart back when I was first starting (I’ve posted it here a few times), and it helped me to familiarize myself with the sequence and logic of the fretboard while studying during my “non-practice” times. I don’t use it anymore, but it came in handy as a study aid in those early days.
Again, I cannot emphasize enough, do not rely on things like this to replace actual practice, and learning your way around the fretboard.
Thanks for doing this @franx

You don’t really need to memorize the entire fretboard… just be familiar with where the notes are that you need. The important thing is to learn the intervals and the relationships from notes to notes. For example, if you’re on an E, you should be able to easily navigate to an A or a B (if that’s what the music sheet calls for) without even thinking about it: or from the root to third or fifth or octave. The notes on the bass fretboard are laid out in a very logical manner, so you just need to understand the patterns. Once you’ve mastered the patterns, you’ve got it!
From there, it’s just a matter of many hours of practice.
Graphics like this are a great study aid for beginners to gain an understanding of the logic of the fretboard.