I use scalerator. Shows you position of each note of any scale or mode on almost any stringed instrument. Use as visual aid and remember the patterns, helps you go up and down the fretboard.

We have a saying here in portugal which is “to pull the coal towards my sardine”, take a look into a tool I’m developing in this topic: Fretful.io (fretboard visualizer) - Alpha release

The thread is lengthy. Just click the link in the first post and explore it! It has grown a lot since its inception

Thanks, that one is nice too.

“to pull the coal towards my sardine”

Wow, now there’s a saying I’ve never heard of (nor can I make sense of)

We have a saying here in portugal which is “to pull the coal towards my sardine”,

This is an amazing saying indeed. Tell us more

5. Cada um puxa a brasa à sua sardinha . (Each one pulls the coal under its sardine.)

The smell of the charcoaled sardines (or mackerel) always makes our mouths water, especially in the summer. To make sure the sardine is delicious, you must have hot coal burning slowly, adding to the deliciousness of the juicy sardine. But doing so in daily life without a barbeque around means you are looking after your own interests.

19 expressions that prove the Portuguese are obsessed with food

"Who eats the meat, gnaws the bones."

Ahh awesome. Grilled fish street food is a thing here in Japan too in some areas and I love it; there’s a big sardine-thing called a “sanma” here that is amazing at street festivals.

Don’t look a gift horse in the mouth

Ahaha. Most probably it was rosemary though.

Ahh awesome. Grilled fish street food is a thing here in Japan too in some areas and I love it; there’s a big sardine-thing called a “sanma” here that is amazing at street festivals.

It’s very popular here in June, on the patron saints festivals. I’m not a fan. But I’m not a fan of fish in general. Which sucks for someone that lives in a country that has 2 of its 4 borders bathed by the sea.

Trivia fact, did you know that it were the portuguese that introduced tempura to japan? And on that note, look up India’s curry origins

Trivia fact, did you know that it were the portuguese that introduced tempura to japan?

I believe it. The two countries had a pretty varied history.

Hi! I really like basicmusictheory. It doesen’t work if you try to use the .com so just search something like ‘basicmusictheory A mixolydian scale’. They have all the scales and modes and circle of fifths. 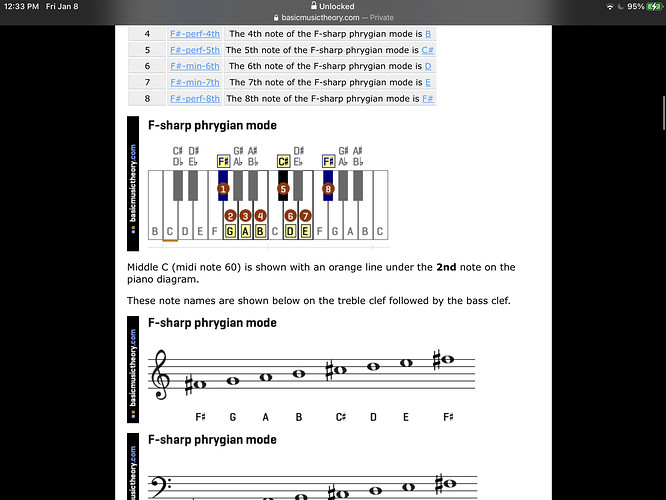 Works fine for me:

That has some good theory info. What I like about scalerator is the fretboard visualization and that it gives relative scales.

Here is an ultra stupid question from someone who has been a gigging bassist for a decade. Ready? What actually is a “mode”. Obviously, I’m not taking the course or I would probably know the answer…

A mode, in it’s simplest term, is a variation on a scale. Mixolydian for example, is a major scale with a flattened 7th degree. Dorian has a flattened 3rd and 7th. Lydan has a sharpened 4th. And so on and so on. There are 7 different modes.

Yes. I get that. I just read all of what Gio wrote on the subject in another thread suggested by you, actually. When I go to research this mode stuff, I invariably end up on classical music you tube videos. I guess a better question would be WHY modes? Just to be fair, I don’t know a lick of theory. I learned to play the same way I learned to speak and while I’m not qualified to be an English professor, I have no trouble communicating with the spoken word. Playing bass is the same way. I don’t know a mode from a scale but I can walk a bass neck from anywhere to anywhere. That being said and tons of reading and video watching done, are they really necessary? I’m not trying to be a smart ass. I am genuinely curious.

I honestly believe you can flourish as a bass player without ever learning about modes. @Gio and @JoshFossgreen may disagree with me, however.

It’s probably stuff I do anyway and just don’t know it as most of what my hands do is automatic based on what my ears hear.

Do you know what a Diphthong is? Most English speaking people don’t, yet they use them in their everyday speech. You used the analogy of knowing how to speak, but not being qualified as an English professor. This is one example.
The same applies to music. Stevie Ray Vaughn couldn’t read or understand music theory to save his life, but he could tear it up on that guitar.
Music theory is quite helpful in understanding what you’re doing as a musician, but much of it is unnecessary if you learned to play by instinct or by emulation. I just happen to be interested in music theory, the same as I have always been interested in the intricacies of the English language.
Just my $0.02 worth.