Heavy Rattling on A String

I am getting a large amount of rattling coming from my A string. It is quite loud. It was bad enough a while ago that I had a setup done and new strings, but that didn’t fix it. The bass nut doesn’t seem to be noticeably worn; at least, it looks like the grooves are machines and not dug in at all. It’s rattling on the metal part (no idea what it is called). Picture attached. Any ideas? 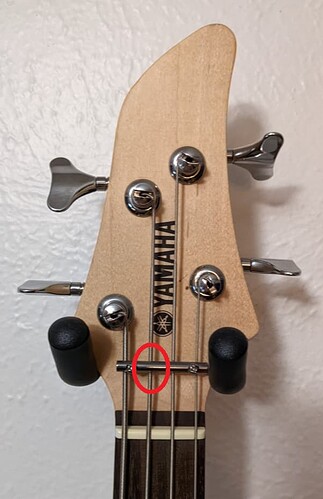 that’s called a string tree. Its purpose is to give the string enough “break angle”

You could try tightening the screws on that so it’s lower, and thus pushing against the string more, as it sounds like the string isn’t quite making contact.

Edit It dawned on me that it might also possibly need to come up if it’s only to provide break angle for the outer strings and not the inner ones.

Edit It dawned on me that it might also possibly need to come up if it’s only to provide break angle for the outer strings and not the inner ones.

It’s there for the two middle strings because they have the shallower angles. It probably need to be tightened because it will contact the D before the A.

push down fairly hard on the string with your finger between the nut and the string tree, does it go away?

hmmm, no. I thought it was coming from the tree, but I don’t think so after that test. I laid it down and moving my ear up and down the string to try and hear where it is contacting just doesn’t seem to work. I couldn’t pinpoint it.
I fretted up and down to see if there was 1 particular fret that made it go away. It looks like if I am fretting on the 1st and 2nd fret of A I still get heavy rattle. On the 3rd fret it’s reduced (maybe half the rattle’ish) through the 11the fret, then from the 12th onward there is no rattle at all.

Time to look to your saddle maybe

Yeah, bridge saddles, and contacting the intonation screw spring behind the saddle. I have that latter case sometimes and have no idea what to do about it. Luckily it’s only local to the bass while playing and the sound does not get amplified at all.

I loosened my strings a bit and then tightened the tree some and re-tuned, but it didn’t help. I posted an update that I was wrong where the sound was coming from. Next stop? Saddle adjustment, but that’s a test for tomorrow.

Well crap. Maybe I won’t test it today… the allen key needed is a funky size. 3 allen sets and I have 1 key that’s barely too small and then 1 that’s barely too big… none juuusst right. Guess I’ll get some smaller ranges ordered and test. Will update whenever they make it in!

I adjusted the saddles higher. I have no idea if I got to a “stock” height since every video that gives a measurement is different than every other video’s measurement, but most just say to set them depending on your playstyle. Side rant: If I already have a play style and know what that means for the height of my strings, I don’t need a freaking video to show me how to use an allen key. Anyway, once I got the rattle mostly gone I used my shiny new radius gauge to get the rest of the strings to the same height so if I adjusted wrong they’ll all at least be uniformly wrong. Plus, new tool!

Thanks for the help everyone!

I’ve never once worried about what the specifications are for pickup and string height. Not once. I’ve always just played with the heights until it felt good and sounded good to me.