How many ledger lines

Do we need to know? On a four string, the lowest note (yes, standard tuning) is E, which I believe is the E one line below the staff. On my bongo, I have 24 frets so it can get a third G on the G string. So that’s, what, up 3 lines, is that correct?

I think three ledger lines up is “just” the G on the 12th fret of your G string. For the G at the 24th fret, you’d need 6 ledger lines and then it sits atop of the upper most. However, nobody would write it like it… apart from the fact that you’d “run” into the line above on the sheet, it is hard to parse quickly which note it is… So, you’d need to use the “8va” convention, which means you write it an octave lower, but indicate it to be played an octave higher.
Here is an example from “Donna Lee”, where Jaco runs up the board quickly (within three bars) from the low E to the Eb on the 20th fret of the G string; basically four octaves: 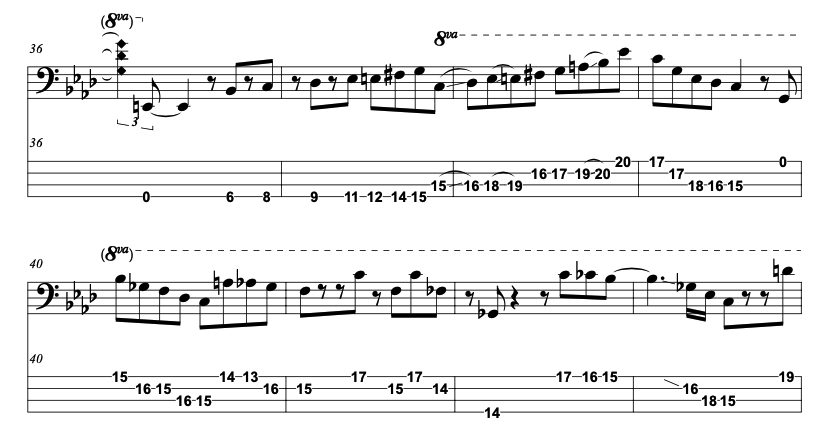 Yes! +1 to @joergkutter’s reply there.
And - it’s nice to see the 8va make an appearance again.

@Gio @joergkutter How many ledger lines are between Bass and Treble Clef, if that makes sense.
Jamie

I guess what you might refer to is when piano sheet music has the treble and the bass clef (right hand and left hand) on top of each other, like so: 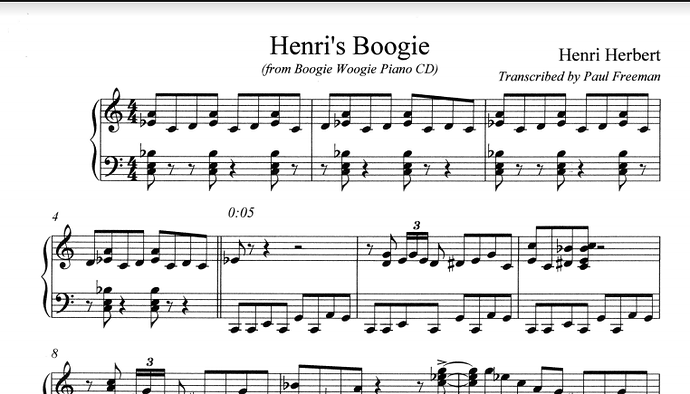 As far as I know - even though it doesn’t look like it - there is only one ledger line between them, corresponding to the same note “C”.

If that holds true, then most charts for bass guitar are “wrong”, in the sense that they are written one octave too high (I think this was already mentioned somewhere else in this forum!?). So, really there should always be a “8vb” or “8va bassa” at the beginning of the score (meaning: is played an octave lower than written). But, this is apparently implied for the bass guitar as it would be too cumbersome to always include the “8vb” or indeed write everything one octave lower to begin with.

Yes, bass guitar notation is transposed by one octave up, so that it fits in the bass clef. It is actually an octave lower than notated.

I think Guitar is too.

@joergkutter thanks that’s starting to make sense.
I’m busy sorting a sheet for guitar and bass. It got me thinking where does the bass end and the guitar begin. 6 guitar 4 string bass. I’m probably getting ahead of myself.
I’m using Pride & Joy as my Learning piece for recording, I want to have it on three tracks Bass Drums Guitar. I have all the gear, I just lack the brain

It got me thinking where does the bass end and the guitar begin.

I think you are overcomplicating things. Maybe I misunderstand but since there are overlaps between guitar and bass it just depends on what/who plays it!?
Or is it me thinking too simple?

Or is it me thinking too simple?

No Julian, I think it’s me overthinking the thinking of the thoughts that I’m thinking

It got me thinking where does the bass end and the guitar begin.

I just couldn’t continue to sit in the simplicity of it and hadn’t really thought about this yet. It looks like a 4-string bass in EADG is tuned one octave down from the lowest strings on a guitar, also EADG. If one starts playing the bass E-string at the 12th fret, it’s the same note (different timbre) as the open E-string on a guitar.

Thanks for that Dave. Odd as that sounds I can now see where it blends. You must be a mind reader as my question was not clear

now I can see bass to rhythm to lead. @DaveT
Jamie

How many ledger lines are between Bass and Treble Clef, if that makes sense.
Jamie

Looks like you got some good answers in here, @Jamietashi.
The guitar is exactly one octave above the bass.
It seems like things got answered, but if there are any follow ups, holler!

If so then I think the range of the bass that’s entirely below the guitar is:
First 11 frets of E
First 6 frets of A
First 1 fret of D

Am I thinking of this correctly?

Am I thinking of this correctly?

You are making accurate statements, yes.
The way you are thinking of it is very TAB focused, it seems to me.
To say that the low E of the bass to the Eb/D# above it is the exclusive range of the bass (if both bass and guitar are tuned to standard tuning) is accurate.
You have correctly identified the fret ranges and strings where this occurs.

The cool thing about all this is that the quality of sound still makes the bass sound low. Just the bass tone - what frequencies are pushed.
I’ve often put my P-bass in standard tuning underneath a metal guitar part tuned down to C or Bb (as low as 6th fret E string / 1st fret A string).
When I play the bass at the same octave as these guitar parts, it still adds bass and heft to the line because of the tone and sound and bass-ness.

Yeah. Similarly, a 5 string only gives you five frets more of notes than a 4-string. But what a difference that 0.135" B string makes.