How to make detuning easier

So the constant detuning and retuning between EADG, DADG and DGCF multiple times a day is becoming a bit of a pain in the arse.

I see that there’s this thing you can put on the headstock that lets you quickly detune a string, but searching for “detuner” I’m unable to find any on amazon or gear4music. What exactly are these called? Also, what’s the catch? Why doesn’t everyone have one?

And I can see that there are pitch shifter pedals as well. I should be able to use that to switch between EADG and DGCF, right? Would that give different results than physically detuning?

Other than the above two, is there anything else that I’m not aware of?

Pitch shifters give you a sound that’s different than an actual string. Still cool but it’s not built for the same job.

For a Detuner, D-Tuner, Extender device search for Gotoh and Hip Shot and you’ll find them.

Why doesn’t everyone use them? Cost and necessity. They cost between $70 and $100 USD per string you would want to use them on and most songs don’t require a tuning change.

I’ve got a Hipshot xtender on my P bass for dropping the E to D at the flick of a lever. I love it but they are a bit of a luxury item unless you’re using them a lot.
You can contact Hipshot directly for the model required for your particular bass but be aware that it is cheaper to Google search exactly what you’re looking for and buy from a retailer

They are called Hipshot Bass Xtenders and are one of the first mods I put on any bass I own. Just flip the little lever and you have instant drop d tuning (DADG). They hold the tuning in both settings surprisingly well.

The tricky part is remembering to flip the lever back to the normal position after finishing the song(s) requiring drop d tuning. 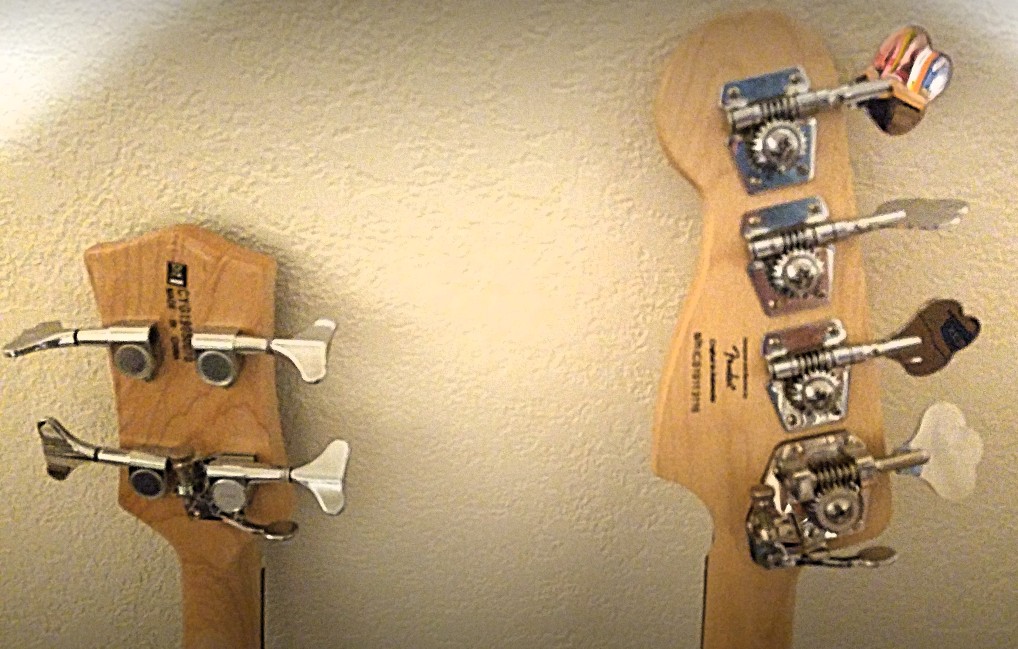 What’s the bass on the right @spidey9?
I’ve just been in touch with Hipshot to see if they make one for the Squier in particular the Mustang

@mac The bass on the right is a Squier Affinity Series Precision. (The one on the left is a Gretsch Junior Jet.)

The Hipshot Xtender on the Squier is a BT7. It is not a drop in replacement - I had to drill new pilot holes for 3 of the 4 mounting screws. Fortunately the peg was the same size - I even used the original bushing.

Good to know @spidey9 . Thank you

I spend at least half my time in Drop D. In general I still haven’t found the need to get one of these - I’ve just gotten fast at tuning up and down a full step

@howard: It’s one of those gadgets that once you try one you’ll wonder how you ever got along without it. I love mine, and I only do a few songs in Drop D, although I plan to do more.

This is a fun one Of course there’s also like half of modern metal too.

I had a 5 for a few months. Strongly prefer 4-strings

Thanks everyone, found it now. None of the product descriptions on the hipshot site mention my model though (Ibanez SR500E), so I’m going to ask them whether they have anything for me.

And yes, I knew the 5-string answer would pop up, but I don’t really want to buy a 5-string at this stage.

I got rid of mine too.

The most obvious answer is that detuning my 4-string or buying a bass extender is cheaper than buying a 5-string.

Having said that, I am not at all against 5-strings, I will definitely try one at a later stage, but at the moment 4 strings are plenty enough for my fingers to deal with. I don’t want the extra neck width, one more string to mute, etc. (Yet.)

You can lead a horse to 5 but you can’t make it play one…hehehe, I get it. Luckily my first was a 4 but that was all I invested so it was cheap for me to change. (all my others are 5). I swapped my 4 with a friend for his 5 and never looked back. Easy to mute coz it’s the top string (use it as a rest) and when you go lower you’d be surprised how you can put your pinky and middle finger to work. I know it’s an added effort at first but I think it pays off.

I had a nice 5 that I liked a lot overall but the string spacing just bugged me. And that’s after adjusting them for width. I just didn’t like the feel with the strings slightly closer together than on a 4.

Everyone should try one though. Don’t let the huge fretboard scare you - if anything it’s easier to reach the EADG strings on a 5 than a 4; the strings are about 2mm closer together so you cut over half a centimeter off the reach for the E string with a 5.

I strung one of my 4-strings in BEAD tuning using the low part of a 5-string set for half a year and that was awesome too. One thing I noticed with the 5 was that for the music I like to play, it was really rare that I would need the range of the B string in any song that used the G string at all. And sure enough, with BEAD, I never missed the G string. Gaining those five semitones on the low end made up for losing the five on top. Cool tuning.

if anything it’s easier to reach the EADG strings on a 5 than a 4; the strings are about 2mm closer together so you cut over half a centimeter off the reach for the E string with a 5

That’s a good point actually, never thought about that