How to Play this Riff?

Hey, Im on Mod4L6 of the BTB course. I found this song and pulled up the tab for it and Im not sure exactly what the smaller number means on the tab means. I think it means to briefly hit the note and slide to the next note. Is this correct? Thanks!

The song is Open My Eyes by Rival Sons. 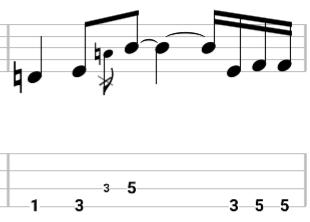 Here is a link to the wikipedia definition of ghost notes.

Pages for logged out editors learn more In music, a ghost note is a musical note with a rhythmic value, but no discernible pitch when played. In musical notation, this is represented by an "X" for a note head instead of an oval, or parentheses around the note head. It should not be confused with the X-shaped notation () that raises a note to a double sharp. On stringed instruments, this is played by sounding a muted string. "Muted to the point where it is more percussive sounding than ...

Awesome! Looks like Ive got some reading to do. Its sometimes difficult to use the Google-foo when I don’t know what it is Im searching for. Thanks again everyone.

Wikipedia says its a slap. I haven’t gotten that far in the course yet. Thanks again everyone.

On the electric bass, ghost notes are widely used in the slap bass style, as a way of creating a percussive, drum-like sound in funk and Latin music. On the double bass, percussive ghost notes are sometimes performed by slapping the strings against the fingerboard, which creates a percussive, “clacky” sound.

You can make a ghost note by resting your fretting hand over any string and plucking it. Kinda sounds like a tick sound. Similar to the noise you get if you aggressively come to rest on a string as it sort of bounces against the frets without actually vibrating. Ghost notes are used in all kinds of songs, not just slap. Can be very tricky depending on how the rhythm is played and takes a lot of practice to nail! Good luck buddy!

It is played at its indicated note pitch in passing to the actual note.

Don’t know why but I have always called ghost notes grace notes when they appear at the beginning of a partial lead in bar to a song and ghost notes when they appear within a full measure within a song. It is an embellishment that is really not necessary but can add to the overall way a song sounds. Its note value does not count as part of the total time value of the measure it appears in.

An appoggiatura is a grace note followed by the main note. The grace note has no set time value in a measure.

On a stringed instrument, a ghost note is a percussive hit on a string, with no pitch, but with a time value. It is used often to accentuate the beat rather than using a rest between notes.

a ghost note is a percussive hit on a string, with no pitch, but with a time value.

I was not aware of the differences in timing between the two.
Thank you for clearing that up for me.