I’m just curious about this one.

I saw an an unusual looking bass in a 1965 video of the 60s group, Unit 4 +2. The song was “Concrete and Clay,” and I believe the bassist was Rodney Garwood. I took two screenshots of the bassist and his bass: 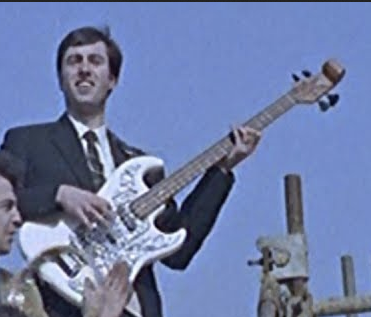 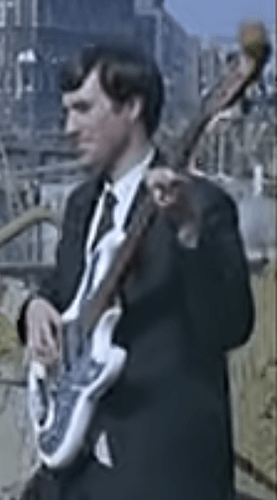 In the last image, it looks like the same bass, but the head is a lighter color than the first two shots.
Not the clearest or largest images, but all I could find. You can see that the head has a scroll on it. The bass also has an interesting pick guard.

Any ideas about the brand and/or model?

Silvertone and Hofner made basses with scroll headstocks, but they were violin basses. I’ll keep looking…

That looks a lot like the Silvertone headstock, though: 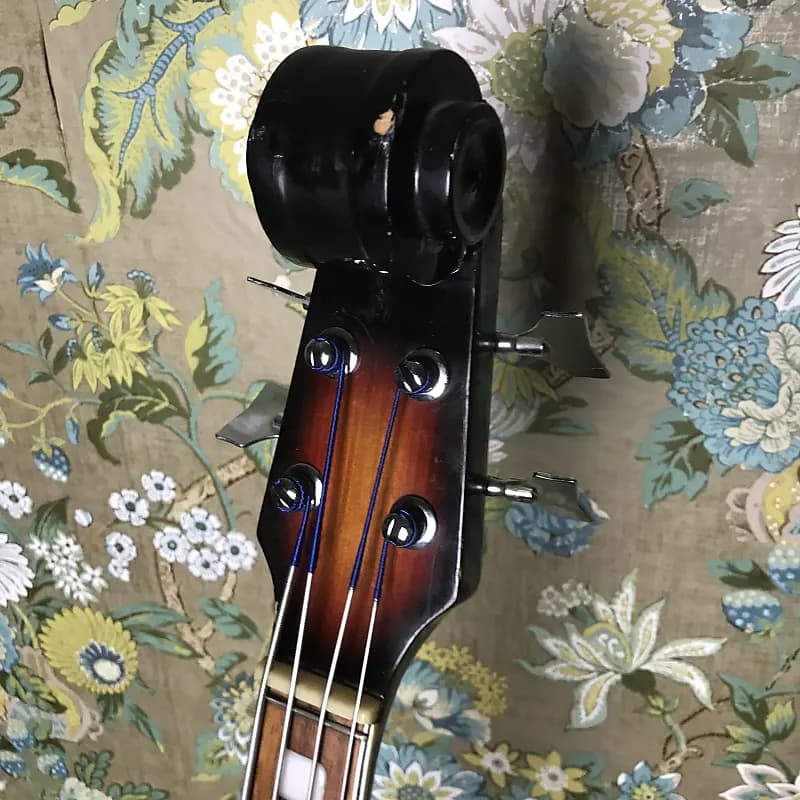 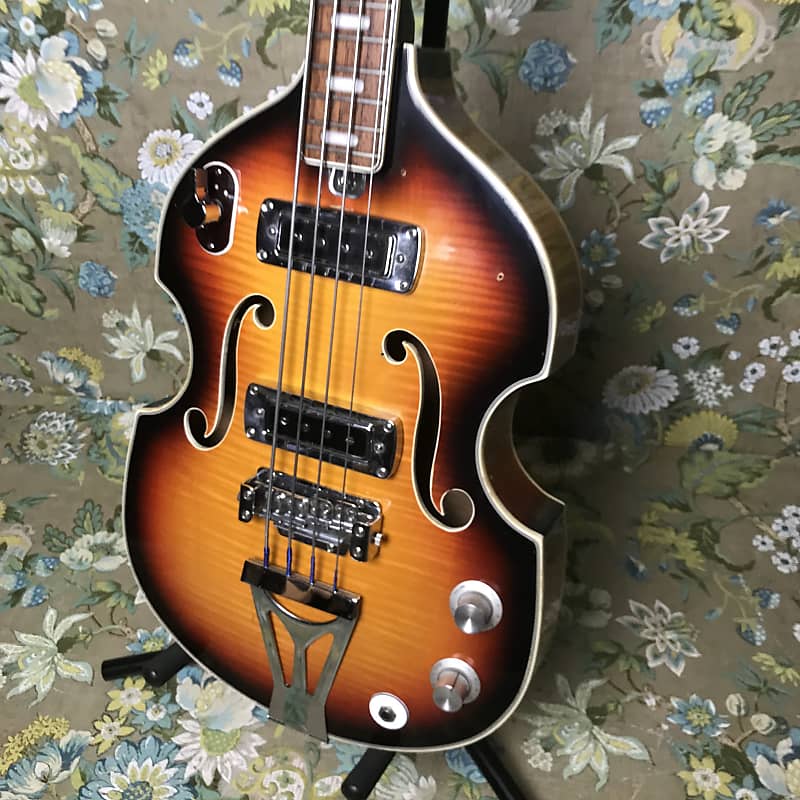 This is the thumper you're looking for. All the McCartney and Motown sounds you can imagine are here in this beautiful rare Silvertone Violin style bass. It's fresh off the bench and fully functional with original pickups, knobs, switches, tailpiece...

Thanks! It does look like the Silvertone scroll, except the head and scroll appear to be a solid color, not a sunburst. Maybe the bass in the images is some type of Frankenstein creation?

I was mostly referring to the shape itself overall…

it could be a Frankenstein, though, I did come across some with neck swaps like that.

@Koldunya, understood about the shape. A scroll makes more sense with a violin style body. 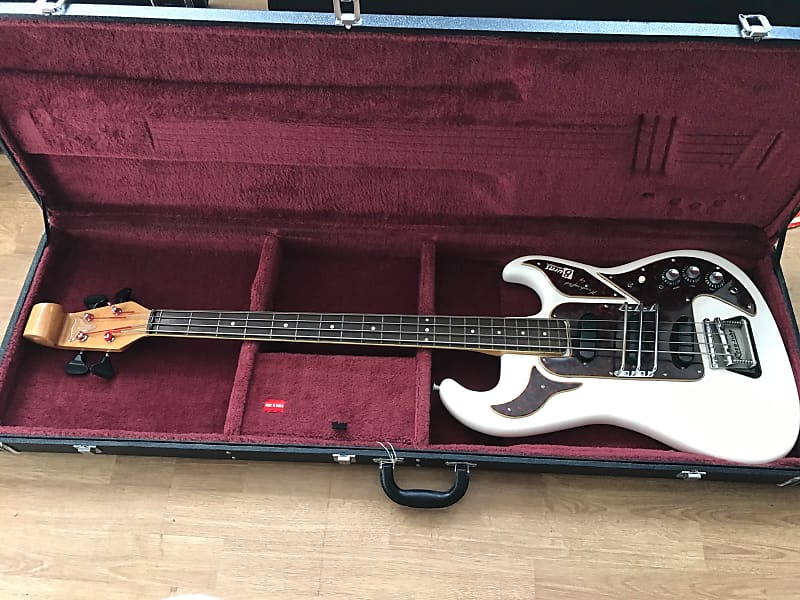 Very rare 1964 Burns bass in Great condition, all original except for the case and 2 extra switches. But they used the screwholes for that so very professional job. Has lots of finish cracks but the paint is still very solid. 2 pickup covers look...

That’s exactly what it is. Positive ID achieved.

@Barney for the win!
Cool basses they made, very odd.
Never seen them before.

@john I remembered reading about it in Geddy Lee’s Big Book of Bass. Page 318 for reference, pull your copy out for more info 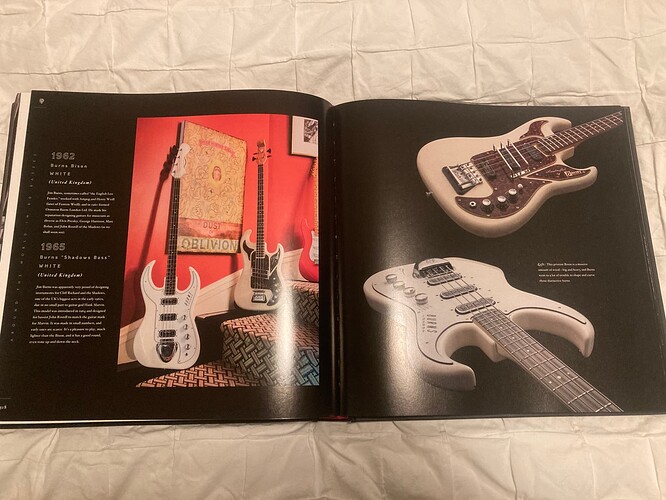 Does this scroll serve any purpose other than looks? To me, it seems it will only make the neck heavier. Is that what this is for? But I never heard anyone say: “Damn, the neck of this bass is too light!”

@Barney Interesting! That Reverb listing, when you look at the photos, shows a reddish-brown tortoise pearloid pickguard, but the one used by the Unit 4 + 2 bassist seems to be something like a silver or white pearloid in the top two color photos. Perhaps it’s the way the sun is reflecting in that outdoor setting.

There’s another (1967) offering of this bass at Reverb, but labeled as Baldwin vs. Burns. It’s also a bit less expensive, about $900, and the shipping is less. There’s also a video of this bass being plalyed. From its much more detailed description:

All original, this iconic Burns model was crafted in the UK and imported by parent company Baldwin for sale in the USA. One of the rarest and most collectable (and yes, best sounding too) models in the Burns/Baldwin line, the Shadows Bass is the counterpart to the Hank Marvin signature model. Produced early in '67, this Shadows Bass features a trio of stock Bar-o-Matik single coil pickups, which are very round, detailed, and clear sounding.

The description of the headstock seems to indicate the scroll in 1967 was not the same as in 1965:

The headstock shape is the later pseudo-scroll style with the transparent raised “Shadows” badge on the face and corresponding accents nailed to the headstock sides.

Does anyone have an idea about the purpose of the three bars over the middle pickup? Seems like that would get in the way of plucking. In the video, the man playing it jumps from above and below these three bars. The example in the Geddy Lee book shows two variations, and the one with what seem to be clear pickguards does not have the bars over the pickup. Also, the headstock is different. I suppose that version might be the “White Bison” model, as mentioned in the second Reverb offering?

@Never2Late the sum total of my knowledge on Burns Basses is seeing a picture of them in Geddy Lee’s Big Book of Bass. As far as pick guard colours go, I have no idea.
I just chose a random Reverb listing to show you the body shape and the headstock detail.
In answer to @Koldunya comment about cost. I mean compared to a mid 60’s Fender it’s a bargain. Price is just what someone is prepared to pay. That’s the free market, innit!

“Price” is just what someone is prepared to pay.

I have really learned a LOT of very cool definitions the more I’ve hung around these Forums, @Barney . . .