i was learning a new song california dreamin by the momas and the papas
i was using a chord chart, and playing roots and adding in notes like thirds and fifths were i could (time wise). but then I happened upon ultimate guitar pro
which shows the song in bass tab, and it looks totally different and much harder .
so now not sure how to learn the song or any song for that matter, i’d love to be able to just listen to the song and know what to play but havent founs a play to learn how to do that yet? so i guess theres two questions here, any help appreciated

@nikkikaine - Learning a new song can be pretty frustrating and challenging in the beginning, however, it can also be very rewarding no matter how you decide to play it on your bass. The really cool thing about playing bass is that the only rule (other than being in key, tone, and time) is that we can create our own specific ‘grooves’ to numerous songs simply by playing roots, thirds, and fifths like you were doing.

Coming across other tabs for the song can either be someone else’s interpretation of what they believe should be played; or it could be the actual notes (sheet music) from the original song. Again, just because the bass line was written one way doesn’t mean that it cannot be played a different way.

There are many times that I’ve also just played roots and fifths on songs that I might be jamming to simply because I don’t know how the original bass notes were written.

If you really want to learn by ear on your own, I would suggest downloading the Application “Transcribe!”. I use it on every song I learn because I can remove any frequency, slow the music down, and actually hear each bass note being played. The app is not that expensive and I’ve already gotten well more than my money’s worth out of it. I think Josh also mentions it at the end of his B2B course as an additional resource.

Most tab out in the wild is inaccurate. It is also great to practice figuring out songs on your own. Being note for note is not needed and in fact even bands playing live rarely play exactly as written. You’ll also find that sometimes there are easier to harder versions of the songs for learning purposes.

The most important aspect is that you are having fun. I’d rather play a song I like OK then a song I don’t like perfect.

Yeah like @Lanny said its all in how you want to play the song. Do you just want to jam along as you have? Then a correct cord chart is all you need. Want to learn the song as written? Then Ultimate Guitar Pro is great for that. It kinda all depends on what the purpose is and what you want.

I view it kinda like the question of. Should a cover band, play as written or make it their own? Here is an article that talks all about that.

Personally, I’m in the make it your own camp. If for no other reason than more than likely the vocals are not going to match the original artist. If everything else is spot on and vocals are off, then there is still that disconnect. It still breaks the immersion (to steal a D&D phrase) just enough for you to no longer believe the lie as it were. However, if you make the entire cover your own, then the vocals being different isn’t off. In fact they are “as written” because that’s how you “wrote” it. As an example, below are two of my favorite covers. Granted the differences in them are fairly large as each changes the style/genre of the song. The Staind track less so than the Goldfinger one, but the acoustic type sound changes it enough IMO.

Without getting horribly off track from the original post, my opinion all stems from something I noticed about myself a few years back. I noticed that “the song” is however I first heard it. Be if it was the original or a cover of the original. For example, The Smashing Pumpkins version of “Lanslide” was the first one I heard of the song. I came from a country music home and was 10 when their version came out. It wasn’t till years later that I heard Fleetwood Mac’s original version. My initial reaction was “Oh who covered this song I wonder…WAIT WHAT!!!” All that to say, maybe I’m different than most people but I have this inherent bias I have to work through when I hear a cover. I have noticed however, its much easier for me to accept it and really enjoy it, the farther it is away from the original track. No matter if its actually a cover, or the original.

If you really want to learn by ear on your own, I would suggest downloading the Application “Transcribe! ”.

This is a great tip, and a great tool for transcription.

However, the starting point for bass transcription, @nikkikaine is being able to hear into the texture of a song and pick out the bass line.
This is super difficult at the beginning of the transcription journey.

Because the bass role is supportive, and because we are trained from birth to sing melody, hear melody, and track melodies, hearing the supportive, more musically structural part of a bassline can be very tricky.

Songs that are good to listen to for bassline finding are Beatles tunes - often Paul’s lines are melodic and mixed good and loud - James Brown - usually the bass is prominent and more easily isolated… anyone with other ideas for good bass-hearing music?

I like your approach of playing with the chord charts and coming up with ideas - I think that’s excellent.
Playing the existing line note for note is a very different challenge, and good places to start might be Hound Dog by Elvis Presley, or Pretty Woman? Other good ones gang?

Best of luck on the adventure!

Other good ones gang?

I like your suggestion on Beatles songs @Gio however, PM’s bass line riffs can be somewhat challenging to get just right - just depends on the level of experience I guess. Certainly challenging and very much rewarding to learn and play though.

One of the first bass heavy songs that I learned early on was “We Gotta Get Outta This Place” by the Animals. I found Chas Chandlers riffs to be distinctive yet strangely mysterious in that the bass notes kind of created a background of hidden anger that complimented the entire song. Along with that, it was a challenge to play and a great feeling of accomplishment when locking in and reproducing those same feelings orientated notes.

larry for transcribe were do you get the songs, can they be from say spotify or amazon music subscription,

@nikkikaine, once you have Transcribe! loaded onto your computer, all you have to do is load any song that is on your computer into the application. I use songs that I have downloaded from iTunes. 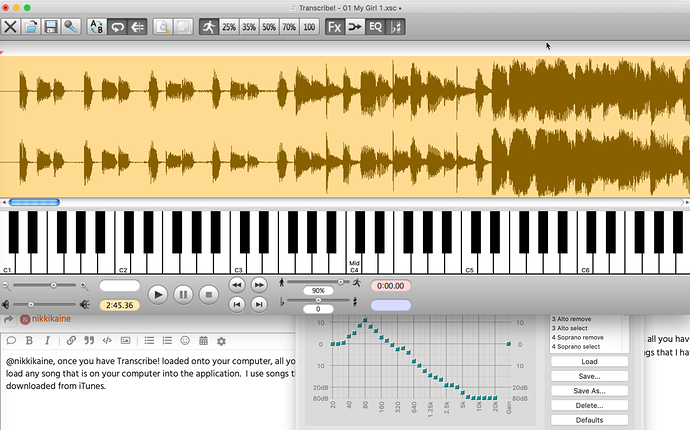 For instance, here’s a song that I’m currently working on that I just loaded into transcribe. You just open the folder icon and search your computer files until you find the song you want to learn and select it. You can then manipulate frequencies and also slow down the song to hear the individual notes and to also learn the song much the same way it is taught in the B2B course.

Oh, yes. I agree.
Sorry it wasn’t more clear - I think that his lines are good just as ear training to hear the bassline.
Not an attempt at transcription, but for that preliminary step of being able to hear the bass in a large band texture.