Most used keys on Spotify

Just re-stumbled across this data and thought others might find it interesting. Spotify analyzed their library (over 30m songs) a few years ago and extracted the keys from each. Here are the results. 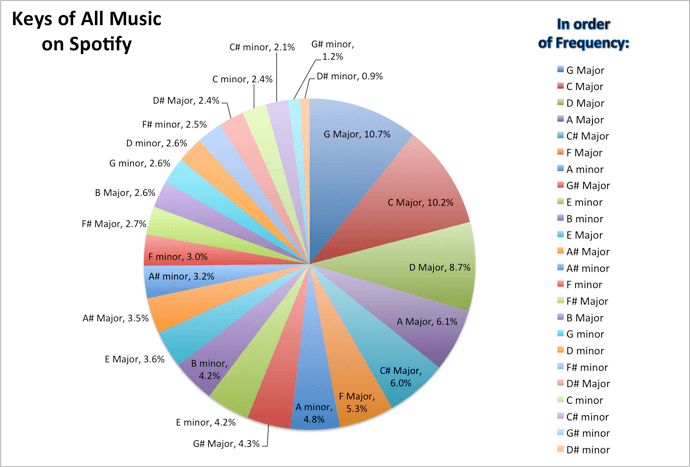 They then looked at the top 1m most played songs on Spotify and broke the keys out further by genre, generating the below. 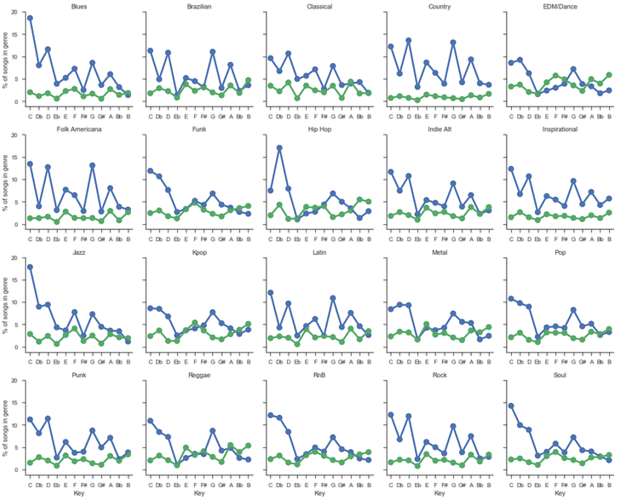 I love data and find this stuff pretty cool. I imagine some of you might be data geeks like me too.

When I have time to sit and stare at this (and I will) I’m sure the patterns and commonalities will be interesting.

There was a documentary on UK tv last year in which they set out to write the ‘perfect pop song’ but using scientific and statistical data. It didn’t really work, but what was interesting was that the more focussed they became on the detailed data, the lower the song scored with the focus groups they used to assess the resulting song. I think their conclusion was along the lines of ‘some of the data is accurate, but the critical ingredient was probably intangible (for now)’.

Also, what’s with the D Flat, Hip Hop? The only interesting instrument I could find with a Db tuning is this, lol: 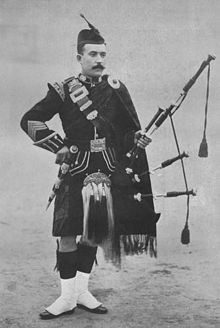 The Great Highland bagpipe (Scottish Gaelic: a' phìob mhòr pronounced [a ˈfiəp ˈvoːɾ] lit. "the great pipe") is a type of bagpipe native to Scotland. It has acquired widespread recognition through its usage in the British military and in pipe bands throughout the world. The bagpipe is first attested in Scotland around 1400, having previously appeared in European artwork in Spain in the 13th century. The earliest references to bagpipes in Scotland are in a military context, and it is in that co...

Haven’t you heard of the massive Scottish hip hop scene?

I suspect this is because a lot of hip hop is digital creation/sampling as opposed to being created by instruments, but it’s a good question!

Hmm. On keyboards Db is actually pretty easy to remember and play in both major and minor - all the black keys plus two whites for Db, and then all but one black key and three white keys for Dbm.

The original articles are no longer on Spotify from what I can tell, but here are the archived ones:

The Most Popular Keys of All Music on Spotify

Each day, approximately 20,000 new songs appear on Spotify, which now has over 30 million tracks, which is obviously a lot of music.As the Beastie Boys once maintained, there are “only twelve notes, well a [hu]man can play.” They were right on the...

Note: On August 3, 2019, Spotify Insights will be no more. But all the data stories you've come to enjoy will be available in Spotify’s newsroom, For The Record. Head over to the site not just for data insights, but also cultural trends, how-tos,...

@howard - it talks about your question and has an interesting response.

“Perhaps most striking here is the spike in Db. This is likely a result of our key signature classifier defaulting the spoken word to that key (or, perhaps, somehow, the resting human voice often naturally gets pitched at Db, not that we looked into that).”

I don’t believe bagpipes have ever played a correct note intentionally. Bb or otherwise.

I hate to be a grammar nazi, but you misspelled “Chip Shop”.

[sorry for the late edit]

Seriously though. E and E minor together having fewer songs than D major - that’s just sad for our E strings. And no one plays in Drop D for D Major

Just start making some hits in E and change the world! Off topic a bit, but I thought playing open strings was frowned upon anyway? Something to do with sound inequality when not using a fret. Or is that just like an old wives tale? I still play open strings regardless, but I have heard people say this in the past.

I was mostly joking because D is just below what you can play on that string at all. Eb would be the real sin there

Open strings have plenty of use but you will get better tone in general from a properly fretted note. I still use open strings all the time though.

Off topic a bit, but I thought playing open strings was frowned upon anyway?

I’ve seen that in instructional vids loads as well, but James Jamerson seems to have made a point of playing open strings.

Super cool stuff. Thanks for this!