Yeah, thats a sweet deal.
I actually want the other one. Not the one with TonePrints, but the one with the comp / boost.
That is a sick little amp if you are limited to a budget, it would power my 4x10 cab just fine. It is fully transparent, which I like about it, but unfortunately, even that is out of my budget right now. The other one I wanted to get was $249, maybe it will drop to $199 now?

I would love to find a reasonable priced Head Lite and or Amp Lite, but they seem hard to come by.
I almost bought a Workingman 404 head for $150, but I was in the hospital or something and when i got back it had sold.

Thing is, I would really like a mini head, like the SWR Head Lite, or one of the TC Electronics, but I don’t really need any more amplification then I already have. But thats like saying I don’t need any more basses or pedals. Of course I don’t NEED any, but a little more never hurt anybody, unless we are talking about fatal doses.

Something like this would go great with that head, would be awesome if you could find one over there. There is a WorkingMan 2 x 10 cab also. However this is better for me, as they are both lite, but this one is on casters, as is the WorkingMan15. The casters pop out of it easy so it can rest on top of this cab, if I wanted to stack it. 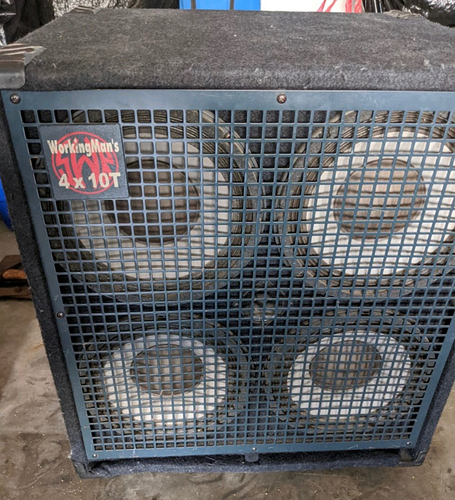 With the combo amp 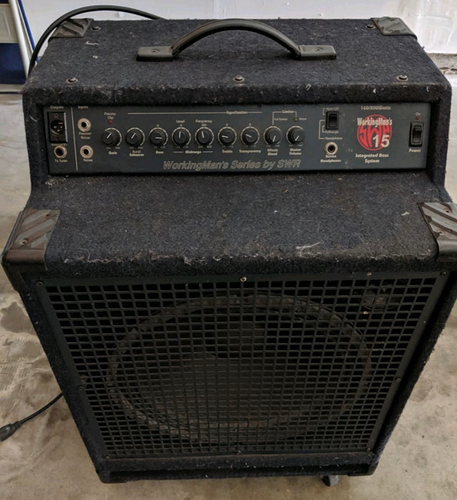 I got such a smoking deal on these two, I don’t think anybody could pass it up. Wait, a bunch of people did, because he advertised for months, then dropped the price to $100 each, after starting at $250 each. I asked him if he could drive them to me, and he did, so I gave him and extra $20 for gas, that he did not ask for.

I had an Orange Crush 20B, and liked it alot, but it started distorting on me once I started playing my active SR400 with the bass boosted, and then it couldn’t handle the Ray4 even with the bass cut, so I sold it and looked for another practice amp. I really wanted a SWR WorkingMan 10, but only find a NEW / OLD stock (that is mighty old, 20 plus years) that had the add on 10" cabinet, and it was like $700 plus $150 shipping, so I found a Hartke KickBack 10, 120 watt practice amp that was killer, and cost $100. I saw it 14 minutes after the add was posted and owned it an hour later.
THEN
like 3 days later an SWR WorkingMan 10 popped up. It was far away, but I asked the guy if he ever came down by where I live. turned out he worked in the next city over, so the next day I had that SWR 10 for $100.
I then sold the Hartke to make up for it. 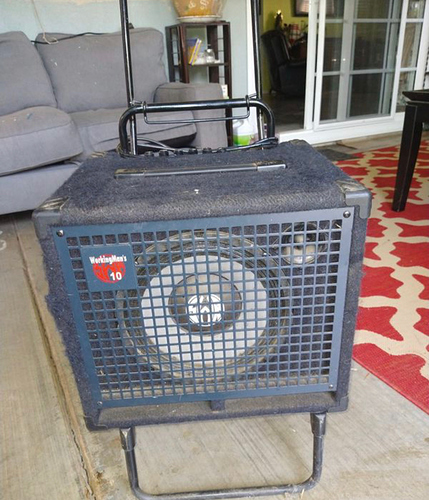 I got the GK BackLine 250 for $12.50. LOL.
The guy was selling it with a Fender BXL or something like that for $50, as partially working.
The GK worked fine, just needed the input jack tightened. The Fender would work ok for about 5 minutes, then made a horrible static noise.
I said I just want the GK, but he said he was gonna toss them if nobody else wanted them by the end of the weekend (this was on a Friday), so make him a reasonable offer.
I said $25, and I will throw the Fender and I will even take the Fender.
So, $12.50 for a perfectly good head.

those look awesome…I have the LA12…I bought it for my son 13-14 yrs ago. He used it one time and I had been using it as a foot stool until I started play bass last June…just realized I’m coming up on my bassiversary!

That looks like a pretty good little amp. I can certainly see wanting something with a little more UMPH, for when you need it, but that is certainly a capable practice amp for home.
I almost want to get a WorkingMan 12 just so I can complete the set.
I saw one if near perfect condition a few months back for $75, begging to be taken, but I resisted for a while, then I went on one of my trips, to detox or detention, I don’t recall, and it was gone when I got back.

Those amps retailed for around $700 in the 90’s. Kind of like MarkBass prices today (inflation considered).

I had the BAM200 and regret selling it. I had so much fun with it and it sounded really well for its size. It fits on top of the palm of your hand.