I really like this thing. Test drove it and a small Orange Crush amp for hours at Guitar Center today.

Asked politely if they could do better on the price; they could. Ended up paying around $175 for it. 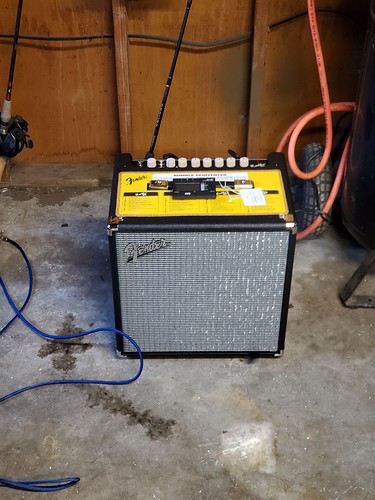 Got out of there before I talked myself into getting that Squier Jazz on the rack. xD

I’ve got the rumble 40 studio myself. I wish I had gotten the one you have mine is a great sounding amp but there’s too many features it can be distracting. But a solid amp with plenty of sound.

What made you choose that over the orange? I’m really liking what I see with the orange crush?

Well, I tried a couple practice amps when I was there.

They had a Carvin cabinet, an Acoustic, Ampeg, amomg others.

I tried quite a few. xD

It came down to the Fender Rumble 40 and the Orange Crush 50. The Orange Crush had a tiny bit more punch and thump (but not overly so to my ears), both amps had a pretty good sound.

I will say the OC had a better arrangement on the control dials, to include an on board tuner. Headphone jack is located on the top, which I like. I already bought a Korg GA-50 tuner, so thats pretty much a feature I don’t need. The Orange Crush had a prettier look, even though I had some nostalgia for the Fender cloth front (father had a Fender Twin that weighed about 9 million tons with that cloth front).

OC was $300, Rumble 40 was listed at $200. I really didn’t just want to cheap out and get the Rumble JUST because it was cheaper. They had smaller, cheaper amps there that really didn’t sound good at all.

I was banging away on both for at least a good hour a piece, with different adjustment. Tried a cheapo Jackson, Squier Jazz, and an American Pbass.

In the end, I decided it wasn’t worth the extra $100 for an extra 10w. Plus they were willing to work with me on the Rumble 40, not so much on the OC.

So, basically, because I was a cheapskate. xD

Both are good amps. Honestly, if money is no object, yeah, the Orange Crush was a better amp. If it was closer to $250 than $300, I’d have an Orange Crush sitting in my garage right now.

cool, thanks for the review. I need to go try both.

I really love the way Orange amps sound, myself. Especially their guitar amps but also their bass amps; they add more color and grit than Fender amps do IMO.

I will say the OC was better in the mids and highs, felt a bit brighter. Especially with that Fender Pbass. Very zippy.

I did like it a lot. Probably when I step up in the gear department, I’ll probably look at the 100 watt 15" variant. More than likely, I’ll cruise the pawn shops for some older Ampeg or Peavey equipment.

Yeah! Orange amps have this bright overdriven sound that I love. Their guitar amps just scream, very distinctive. Very Britrock. Some would say overrated, but I love them.