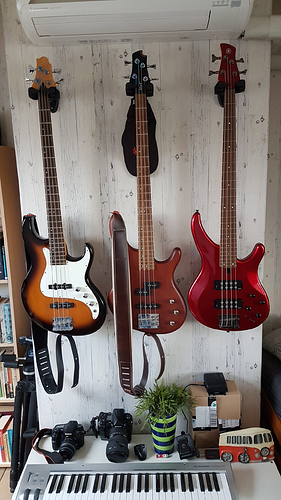 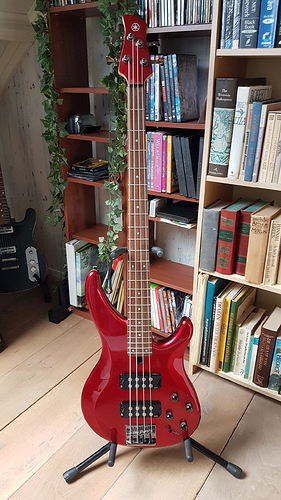 I couldn’t bear waiting anymore, so I picked it up a day early.

Needs a little work - this one has never had a setup. According to the owner’s mother, it’s been played twice, for less than an hour in total. Since she bought it for him, she’s keeping the proceeds.

I gave her €110 in appreciation, but she insisted on €100. Judging from their house and their interior, that would’ve been completely symbolic anyway – they’ve obviously done very well.

Better pics and more impressions to follow after I’ve tweaked the thing a bit. But first, there is some household work to be done.

The red is what hooked me too

For me, it would’ve been Mist Green or this.

The green is a really interesting color.

I like the Candy Apple Red color. my old Yamaha is this color too

After adjusting the truss rod, the action is as low as it is on the Cort (low af).
There is no buzzing. I’ll have to see if I can gain a little more from saddle adjustments – the Samick (Gregg Bennett) J still has the edge here.

In other news: straight into the amp, it sounds yummy. That is, until the battery died on me. But I’ve got a new one waiting.

I may be somewhat busy for the rest of the day.

The Samick no longer has the edge. That’s a standard SDHC card stuck between the strings and the 12th fret, so that would be a smidge under 2mm (5/64"). 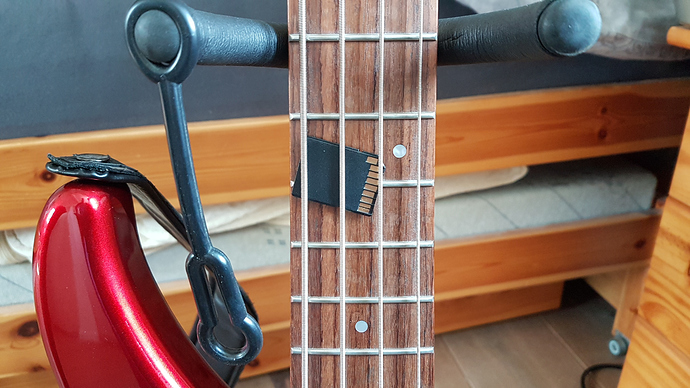 Now, time for it to settle in.

That’s actually a pretty clever idea to use a SDHC card as a gauge like that, @peterhuppertz

I tried using small coins, but they kept slipping out . . .

Then I got one of those “string action gauge” rulers from Stew Mac, but went blind trying to read it . . .

I eventually just went with how my action felt . . .

That’s about what I run, mine’s at about 2.25 right now. For pure fingerstyle or slap I could go lower, but picking gets hard without some buzz at lower than that.

I eventually just went with how my action felt . . .

That’s what I did too.

I then deployed the SDHC card on both basses to see how similar they were in terms of action height, out of pure curiosity.

picking gets hard without some buzz at lower than that.

Yeah, I wouldn’t know about that. I don’t even have a pick.

that’s fun but I’m not so sure about the SD card test. my basses passed the test very easily (I mean, with a lot of margin), so a SD card may be too thick for a setup competition. 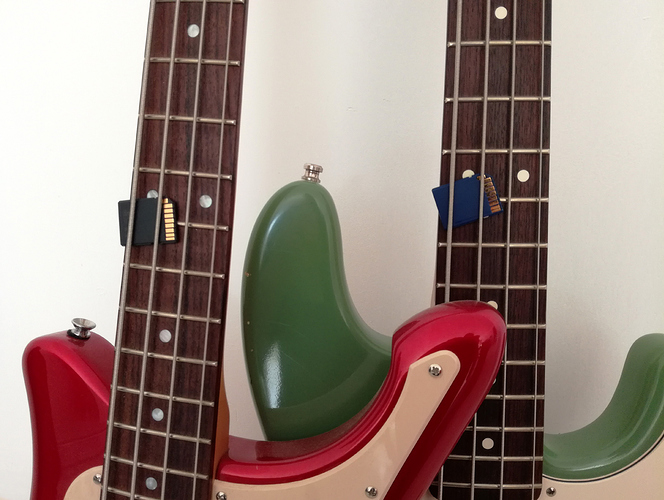 … anyway I agree that, at this level, we’re talking about a low action / very good setup if there’s not much fret buzz.

I don’t even have a pick.

… so I guess I have to add that my setups are made for playing with a pick and tuned in drop tuning (Drop-C for Greenie, Drop-C# for the Ol’Yam’) and with low gauges (100 on Greenie, 105 on the Yam). but I must say that I’m OK with a little bit of fret buzz : I won’t sacrifice the low action for that, as long as the bass is still comfortably playable.

I might be a bit on the low side with my Schecter, but fret buzz is still manageable 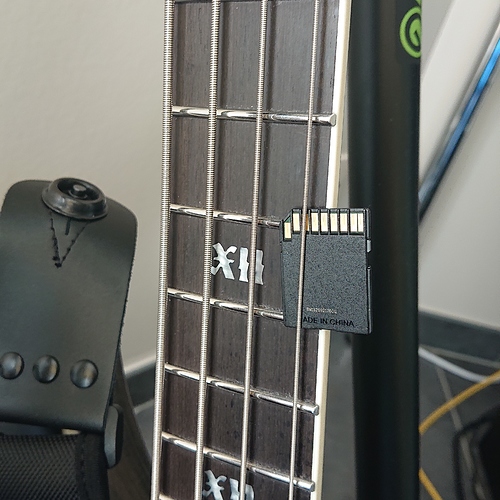 I guess that explains it – at the first hint of buzz, I went a quarter turn up and left it at that.

Yeah, I wouldn’t know about that. I don’t even have a pick.

I have some, I got them when I first got my first bass thinking I would be a pick player more then finger or slap. I am not a pick player at all, but I can see wanting to learn some songs later on that would be better played with a pick, so they rest until then.

I love your new wall, but if it were me, I would have your Samick in the middle. Just the other two are similar ( not exact, and maybe not as close as it looks in the photo in real life, but close enuf to my eye) in color and both are single color instead of burst, I think it balances the wall better.

But that’s my liking, you may have reason for how they are hung that suits you better.

but I must say that I’m OK with a little bit of fret buzz : I won’t sacrifice the low action for that, as long as the bass is still comfortably playable.

I agree with this, it’s really the low strings that get it when playing hard anyway, the high strings don’t usually get buzz IME

I would have your Samick in the middle 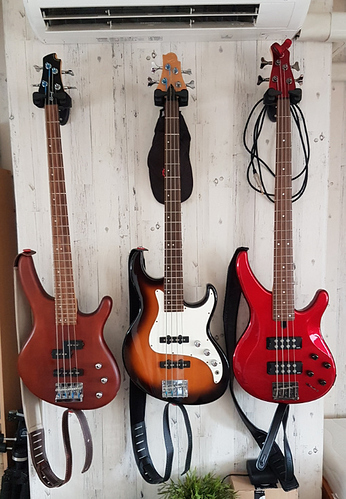 The arrangement dated back to when the Telecaster was hanging in the middle. Once I got the Cort, I just took the Tele out and replaced it with the Cort.

I agree with this, it’s really the low strings that get it when playing hard anyway

I don’t want buzz, period. If a string buzzes, it goes a quarter turn up, end of story – unless I’m playing a Rick. But I haven’t had a Rick for 38 years now.
Luckily I have a genteel touch; I don’t “dig in” like Geddy Lee.

I am currently still experimenting with my action.
I noticed that there’s a difference with string buzz depending on the exact angle of my plucking hand. There is less fret buzz when my fingers go down to the string perpendicular. The more they are angled the more fret buzz I get.

So I am currently lamenting wether I should keep the action in a way that a less clean technique results in fret buzz or a more forgiving setup for the action. Regarding the feel while playing I prefer the action as low as possible so I tend towards the first option.