I just got the “Happy Anniversary” badge. That means it’s been a year since I signed up for Bass Buzz…

…and I still haven’t finished the course. =/

I wouldn’t stress about not finishing the course mate. All at your own pace

I just got the “Happy Anniversary” badge

That’s a one year on the forum thing, not a course thing.

Don’t sweat it! But the day you finish it you let me know and I’ll send you a commemorative banana! (Bass not included). 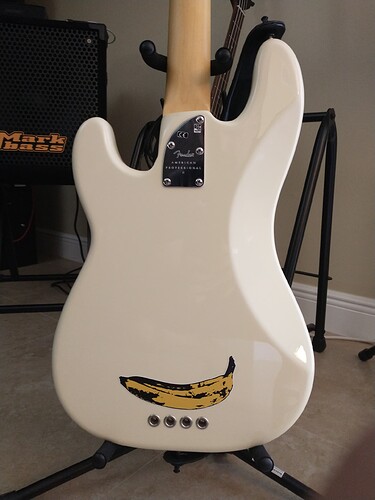 Don’t do today what you can put off til tomorrow

Don’t sweat not finishing the course. Take your own time

I haven’t really finished it either @timsgeekery I skipped right past the whole slap thing.

I think in a big picture way, none of us really finishes anything as far as learning an instrument.

Apologies if that’s too navel gazing. Normally service will be resumed shortly.

I think in a big picture way, none of us really finishes anything as far as learning an instrument.

Love this.
So true.
I think “I took that course” is a lot better than saying “I finished that couse”, always more to learn from any course. I am going to try to start saying that instead.

When I was in high school and took martial arts, I took something called Tang Soo Do, basically a Korean variant of Taekwondo.
They had no black belts (back then, or at least my instructor) while you took your classes
The highest levels were a dark blue called ‘midnight blue’, to signify that you never stop learning.
I always liked the symbolism of that.

Don’t do today what you can put off til tomorrow 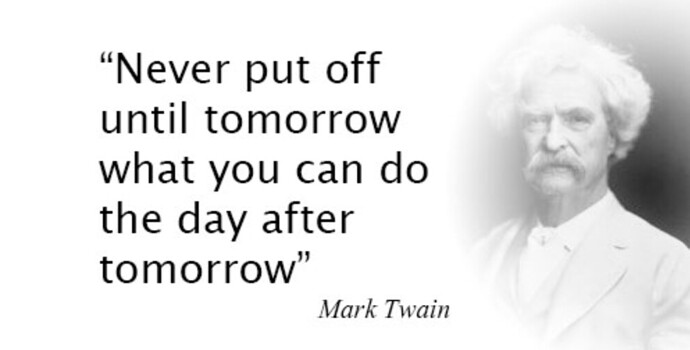 I know that guy. He was on Star Trek TNG

…and I still haven’t finished the course. =/

So ticking all the boxes and finishing is awesome-but is it really the goal? For myself, learning to play is the goal. When i say i finished b2b, what i mean is i took the first big step in my journey. I still use these lessons daily. Because good fundamentals equals good play.

But that’s beyond the point. Happy bassiversary! Ain’t no feeling like looking back a year and seeing how far you’ve come. Being able to hear something new and think “yeah, I’ll play that”

That’s a one year on the forum thing, not a course thing.

Right, but I signed up for the forums on the same day I started the course.

is it really the goal?

I know that when I signed up for Bass Buzz - all bright eyed and bushy tailed - I looked at the “Extras” book and planned on being done with the 3-month schedule. Alas and alack.

Please note that this isn’t a “poor me” thread or anything like that. More an observation than anything else. I’m very pleased with my progress as a bass player over the last year, and I owe most of that (if not all of that) to Bass Buzz and the community here. And for that I thank all y’alls.

Congrats on your 1-year.
Many don’t finish the course in a year, as others have said, it is a journey.
That said, I have found BassBuzz gives a great foundation but is truly the beginning.
Once you finish B2B your world opens up to all the other available tools to keep you learning and developing.
Take it in your time, but do try to finish it and continue on in your journey (there is an extensive thread on options for ‘life after B2B’.

Bruh, i took so long going through the course. It was like 6 months-and i was playingat least an hour a day. I then bumped that up more by getting up earlier so i could practice before work.
Everyone learns at their own pace. Yours is right for you. Am ia little envious of those people who just get it? Yeah, a little. But I’ll grind a little harder for it is all. I’ll get it in time.

It’s true. Learning the instrument is the goal. B2b is a huge step in that-i would certainly never minimize or diminish anyone’s goals. My goal is to recall what i was playing this morning.well, that and be adequate. I’d settle for adequacy.

I studied Uechi Ryu, an Okinawa karate based on four styles of kung fu. Its emphasis was on technique as physical meditation.

I was in music school then, and my sax prof would freak out when I’d show up for my private lessons with bruised forearms and/or a jammed finger, or two. He thought I was nuts.

But it was all worth it to experience the centering that I got from the mindful pursuit of technique.

No competition. No belts of a billion colors that are marketing tools at strip mall dojos. Just technique for its own merits.

Thing is, I was in my mid-20s back then. There were no kids in karate class. And, yes, it was a bit harder to do the stretches and learn the many movements and steps in several katas. But it made the study and the pursuit of technique all the more valuable, especially when surrounded by so many like-minded people.

In a lot of ways, that’s how I feel about B2B and the players here.

You’re doing the course for yourself, man. Time spent doing it is irrelevant.

Think of it like driver’s ed: Sure, you take some lessons and learn what the rules of the road are and how to parallel park, but really knowing how to drive well will take years of mindful practice.

Some people do “get it” quicker than others. But who cares? Everyone is driving the same roads. And there is no “destination.”

The payoff for trying, not winning, comes from simply driving.

Feel the breeze and carry on. 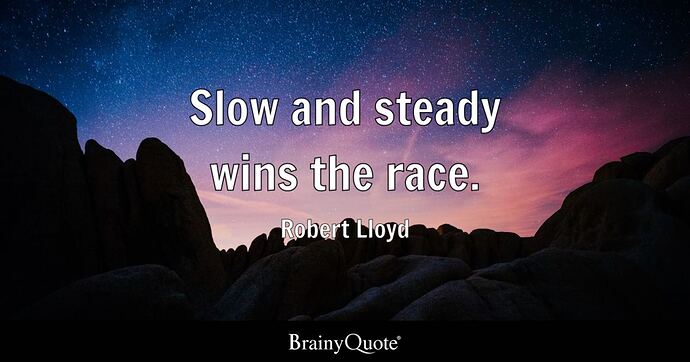 @timsgeekery The saying “Slow is smooth, smooth is fast” comes from special operators in the military. Only by going slowly and ensuring they are doing things correctly can they perform any tasks with an efficient amount of speed.

Not too shabby company to keep.

Don’t listen to Brown Jobs or Fish Heads and you’ll be ok.