Along with my guitar/flute/fiddle playing friend who came to my house and jammed with me a few weeks ago, I am going to organize an open jam session at our American Legion post. The idea is, we’ll announce it on their Facebook page, and see who shows up. It could be a bust, or it could turn into a regular thing.
I’ve never been to a jam session in my life, and here I am organizing one. I have no idea what to do, or what to expect. Any tips or advice?

Ooooohh, you’re a BRAVE one @PamPurrs! Open jam sessions can be a ton of fun!!

You must belong to a fairly laid back, civilized and tame Post!

The one thing I’ve learned (first hand) with open jam sessions is that the location of the venue plays heavily into the experience.

That said, the only open jams that I typically attend now a days are ones that are held in non-drinking establishments. The only thing then that you might experience then will be the occasional player who never used a metronome before in their life…

Maybe you could connect with a couple other players from the Post before holding the first jam actual session so that you can at least start off with a small core group that can at least “set the stage” and limit the open involvement of the… “over indulgers”??..

Good Luck!! And be sure to keep us informed as to how it all turns out!!

Yeah, this can be tricky… but doesn’t have to be

Maybe you could secure a drummer beforehand (and a drumset) - like @Lanny said, to have a core group of people that can get the jam going and keep it going!?

I assume you guys want to play rock, but the “easiest” to start jamming is typically a blues or two. It doesn’t even have to be a cover of an existing/recorded blues - you could just use the 12 chord blues scheme (the simplest one), agree on the key and tempo and set off! Here, it might be a good idea if the rhythm group had a good idea whether they want to do a rock blues, slow blues, blues ballad (12/8) etc before counting in

As soon as you have that groove going soloists will/can join in.

So, blues is an obvious choice! I (personally) would also go for “simple” latin pieces that almost everybody knows - Song for my Father and Blue Bossa come to mind. But… that might be already too “jazzy” for your taste. So, perhaps, you find two-three “simple” rock songs (perhaps some you already know from the BassBuzz course etc).

Of course, for everything that is not totally improvisational (like a blues can be), someone needs to be able to play or sing the melody

Just a few thoughts from me - not super organized, sorry, but I hope they help in planning this event!

Good luck and keep us posted!

Coolness. Good advice from the posts above too.

If you wanted to expand the potential audience, you could always also call it an open mic, and let people read poetry, try their hand at comedy, or other things.

Also, just encourage people to attend, or, if they played an instrument or sang a long time ago, support them taking another crack at it.

Yeah, let us know how it goes!

I can hardly wait to hear how this goes. Good luck!

I’m looking forward to hearing about how this goes, also. Even if it doesn’t go the way you expect, it will still be a huge learning experience.

I’ve never been to a jam session in my life, and here I am organizing one. I have no idea what to do, or what to expect. Any tips or advice?

Great mission, and yes - I have some advice!

As was said in other lovely comments - secure a core group of players. You can’t count on a jam session being flush and full… ever. It takes time to establish sometimes, so you want people there to play with in case you don’t have a lot of folks rolling in.
Also, you want to have people there that can anchor things and know some music so that if very inexperienced players come, they have something to lean on. Alternately - if very experienced people show up, they’ll enjoy playing with people who know some songs.

HAVE A SONG BOOK!!! This is crucial. Find anything at all that you and your friends can agree on is a good list of songs, put the chords over the lyrics, find a published book of songs - download something off the internet - anything. You have to have lyrics and chords for people! It’s so nice to have, so that anyone that shows up can sit in and play, and so that people don’t forget all the lyrics to the verses of songs.

As the leader, don’t be afraid to lead. It doesn’t matter if you’re an experienced player or not. Jam sessions can have a lot of nerves and fragile egos at stake, and it is much more comfortable if there is a point person who is passing around the song choices, the solo times, etc.

Jam sessions run on a song by song rotation, and each song (as the leader) gives you a chance to rotate people in and out. As the leader, be prepared to:
Select the song
Teach or give lyric/chord charts to people who want to play.
Starting the song - singing the song - passing solos around during the solo breaks - ending the song.

When other people get into the jam, I like to invite them to lead a song of their choosing. Hopefully they’ll do all the things listed above.

There’s lots of fun “jam session rules” lists out there. I’d recommend looking up some of those. They’re usually pretty funny, but accurate.
My advice -
Don’t have more than 3 guitar players at any time. ha.

Good luck!! Please keep us posted here on how things go, and if you have any questions, let us know. I’ve run lots of jam sessions - the good, the bad, and the very ugly. I can try and help, or just commiserate. Whatever helps!!

So, anyone else getting a little worried here?? We haven’t heard from @PamPurrs since she started this thread a good week ago (unless I have overlooked some other posts)… I would have at least expected a couple of “dry” remarks back on our suggestions by now

Hope everything is OK and she is cruising across the country on her bike while rallying up musicians for the jam session!?!

I was thinking on this too. But it’s not the first time @PamPurrs has disappeared from the forum for a week.

The fact that I know this might be a good sign I spend too much time on the forum and should probably disappear for a week also.

The fact that I know this might be a good sign I spend too much time on the forum and should probably disappear for a week also.

Guilty as charged as well

Oh jeez! It looks like we’ve got some stalkers on the forums.

@joergkutter I just came across this post, I don’t know why I didn’t see it earlier.

I was absent due to some projects that had to be done and were taking a lot of my time and focus away from playing my bass.

Thank you for your concern, but I am just fine.

Update on the jam session… there is no update.

I had to put it on hold for the above referenced reasons, but it is still on my radar. It will probably happen in early April.

Trying to start a jam session in my neighborhood was what drove me to this site. I thought I was ready, but my big issue was not being able to communicate with the 3 guitarists that showed up. That and they really only wanted to play some old country which was basically just a R/5 for me. I was hoping to do some improv, lay down some basic lines and let them experiment over them, then have them reciprocate but they didn’t understand. So after 2 short sessions we broke up and I started looking for somewhere to complete my training.

not being able to communicate with the 3 guitarists that showed up.

There are an endless number of guitarists out there, I’ve found, and many just want to do their own thing, or sort of frown on bass. Luckily for bass players, there are so few of us, that, well, you can kind of call the shots

If one guitarist is not down to collaborate or compromise, pretty easy to move on to someone else! Sometimes better to do a phone/text screen before inviting them all over too! 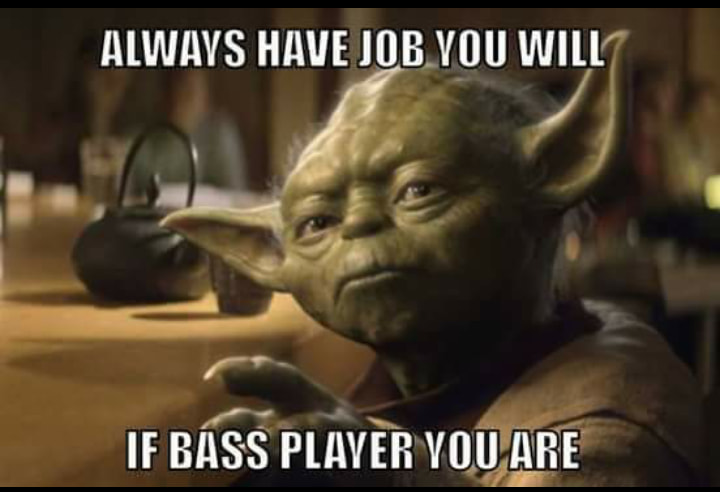