My Peavey Max 300 combo amp has developed an internal rattle/buzz that has become unbearable even a low volume. It’s nothing I can get to with a screwdriver to simply tighten down without voiding my warranty.

So today I finally gave in a sent an email off to their support to see what my options are. I’ve only owned it about 8 months so I should be good there, and I bought it from their Amazon store. But I really have no idea what they will have to say. I have the original box and packing if it comes to that, but if I have to pay to ship it back to them… GULP!!!$

We shall see!
Chris

Ugh… and all of them 3 hours one way

Well… Peavey replied and recommended I take it to one of their authorized service centers. After searching their site more I discovered there is one right here, 10 mins from my house.

I called him up and it’s a guy who does it out of a shop in his backyard. I brought my amp over today and out to his shop we went. Turns out he is certified by and has contracts with most major amp manufacturers. Plus several of the large nation wide chain music stores, and is one of the go-to guys in the country for all their vintage tube amp work. His credentials were pretty impressive and he is a really awesome guy too. Oh wait… It gets better… He is also a master luthier and had a bunch of guitars and basses he was working on or building custom from scratch. The craftsmanship on what he showed me he was building blew me away, I feel like I hit the jackpot finding this guy.

Anyway… He will figure out exactly what’s wrong with my amp, then he works with Peavey to see if they will cover it. If they wont cover it, I work with him directly. Which I’m actually good with if it comes to that after today.

One week past and I received a call that my amp was ready to pick come pick up. He told me that he had spent several hours with my AMP completely dissembled and re-assembled it. I was pleased to hear that he felt the AMP was very well constructed, all the electronics were properly secured secured from the factory, and whole thing was 1/2 birch ply too and not particle board under the hood.

The only thing he found wrong was a rubber pad that was on the end of a wooden support (in red in the pic) that goes from the board the speakers are mounted on to the grill. The rubber piece on the grill end was shot and, he replaced it with a piece of Velcro. 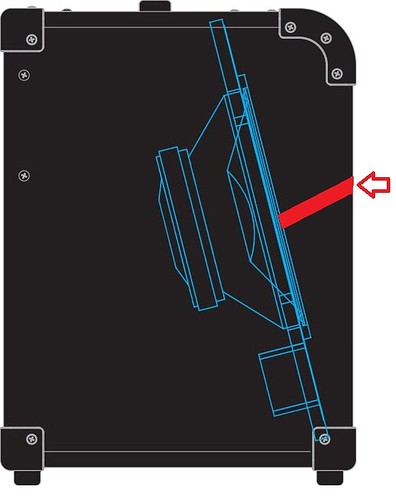 Now… I know this wasn’t the root cause of the problem because I had taken the grill off and played for this very reason and the vibration was still there then. However… the vibration is GONE now and I’m a happy camper. So a combination of the pad on the support being replaced and the complete disassembly and reassembly solved the issue. Maybe he tightened up the other end of the support too??? IDK… but it’s fixed!!!

So after telling me what he did, and how much time he spend. He told me this wasn’t something he could go after Peavey under warranty for because he didn’t really find anything wrong and they would laugh at him.

So I said… “No problem, I’m just happy it’s fixed, how much do I owe you.” To which he replied there was no charge, he didn’t really do anything other than take it apart and put it back together. I asked him if he was sure, it was his time after all. He smiled, and said not to worry about it, if I ever had anything serious go wrong with an amp or an instrument he’d get me then.

I’m so impressed with this guy! Not only for the deal I got but his luthier skills as well. I was expecting to be charged at least $100 for the time he spent on it. He WILL have more business from me I’m 100% sure. I can’t afford to have him make me a custom bass right away, but I have a project in mind as an upgrade to my own bass in the near future that I’m not sure I want to tackle or not (Think Fishman Fluence pickups and pre amp in my Ibanez SR370E)

That’s some amazing service right there.

That is indeed great customer service . . .

Glad you got everything sorted, @csmundell . .