Playing in a specific key

You could play the E major or minor scale from any E on the fretboard, including the open E, @Gadget . . .

Try not to limit your thinking to the “E string” or the “A string”… They’re usually just mentioned to literally identify the strings, instead of saying “1st” or “2nd string”.

Not to split hairs, Joe, but you forgot the G in the minor scale…

Also, it is a minor scale, in fact it is E dorian, while the natural E minor (E aeolian) would have the C instead of the C#

I was using the open E as an example. Basically you play notes from within that keynote scale?

The string itself doesn’t matter. The root note for the scale can be any E, not just open E string. In fact playing E Major with the open E string is less convenient than with other E’s on the fretboard in that it’s a different shape and slightly longer reach. E minor works well though.

If you’re playing in the scale of F, there is no F string

To clarify, the key isn’t always the note you start with. It is the root note of what you are playing. Songs often start on the root note, but not always.

If you’re playing in the scale of F, there is no F string

Lets say you wanted to play in “C”. There are variations of C, but lets keep it simple and say you are trying to play one of the main two C’s, a C-Major or a C-Minor. Lets stick with the C-Major as that’s the simplest scale as it contains no sharps or flats. Within the C-Major scale, you have the notes: C, D, E, F, G, A, B. Those notes appear all over the fretboard. For example, you have an Open A string, but you can also play the 5th fret on the E-String. Both are A’s. If you are playing in C-Major then any of those 7 notes will sound like they belong, including any location of them on the fretboard. Of course, if you are jumping around all over the place on the fretboard it might not sound as connected as playing the notes that are closer to each other. It might be easier to stay in one position and play the notes in the C-Major scale without really moving your hand around for example. Also, try to come back to the C regularly, particularly at the beginning of a section, to stress that it is in the key of C. Note: There are no rules here. Music is personal taste and you should do what sounds good to you. I’m just giving some loose advice. Hope that helps.

Note: There are no rules here. Music is personal taste and you should do what sounds good to you. I’m just giving some loose advice. Hope that helps.

And to add even more flavor you can throw in 1 or 2 out of scale notes.

It would be all still in the Key of E 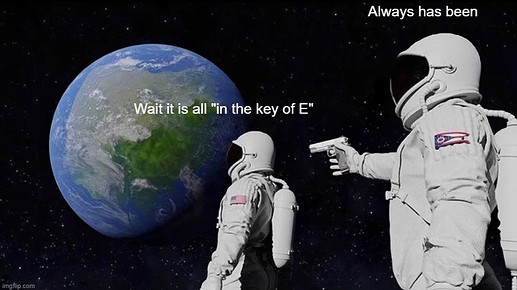 Yeah, definitely. Out of scale notes in a song can bring the spice for sure. However, I find myself mainly using them for short single notes as opposed to long or repeating ones. Also, they can work great for transitions/fills. Again though, music is subjective. Get your creative juices flowing! If we didn’t experiment we’d all still be playing Classical music. Not that there is anything wrong with classical music.

Something that helped me, even though it is a bit deeper dive, is the concept of chromatic notes (notes not in the scale) and the concept of resonance and dissonance.

Resonant notes “fit” best best with the root note. So the root note itself, the 3 and the 5 in the scale are the most resonant notes, followed by 4th and 7th followed by 2 and 6. A way to test this is play the notes together. So on C major play C and D at the same time. Does it sound as “harmonious” as C and E (the 3rd) played at the same time? It doesn’t. The reason is the 3rd is more resonant than the 2, or the 2 is more dissonant!

Taking it further CHROMATIC notes are even MORE dissonant. These are often what you hear when you have heard a “sour” note (though a note in scale can be sour too). What’s important though musically is that dissonance causes tension, while resonance creates resolve. The more dissonant, the more tense, the more resonant the closer to resolve/release. This is why so many songs resolve on the root note!

This might be slightly off topic,forgive me if it is,but I have found this little interactive circle of fifths app that let’s you hear and see the relationships between scales and chords…I’m trying to make sense of all the advice when it comes to theory , but it seems I’m poor at understanding written text and conceptualizing it into a pattern that my gray matter understands.

Circle of Fifths [Free, No ads]

The circle of fifths (Sometimes called circle of fourths) is a great tool for understanding the music theory behind the 12 keys of the chromatic scale. It is useful for visualizing the music notation of the different scales, composing chord progressions/modulations and mixing in key. Features: - Color-coded relationship between the major, minor and diminished keys - Key signature and triad for each key - A sounded chord/arpeggio for each key (With mute/unmute toggle) - Ability to lock the circl...