Poll: Fingertips, pads or in between

I’ve seen a lot of videos online saying correct fretting technique is to curl the fingers and land on the string directly with the very tip of the finger, the argument that this improves speed of playing and avoids touching other strings and accidentally bending the string.

I’ve also seen others advocating using the pads with the fingers straight so whilst they are touching other strings they are also muting them and some suggesting somewhere between the two approaches (hitting the string at a diagonal) however these tend to be discussed as an additional technique with fingertip still being discussed as the correct technique to learn.

For me using fingertips is simply too painful - I don’t seem to have enough padding so I’m just hitting bone and whilst eventually I might build callouses I can only play 1 minute tops like this so this would be a long and painful journey!

I’ve tried looking at a few videos of professionals and its hard to tell what they are doing exactly but not all of them appear to be curling their fingers all the time. I’m curious what people do so I’ve added a poll.

I always try to use my fingertips and yes, I’ve played guitar in the past but that was 30+ years ago

Depends on what I’m playing, which frets I’m on, etc.

I mostly use fingertips, but to be accurate I put down “In Between” . . .

I’ve never really thought much about this, but being that I have to keep my fingernails trimmed to the nubs, lest they make weird noises on the strings, I selected “Fingertip”.

I usually try to use the fingertips but it all depends on where I grip exactly and how comfortably it’s possible.

Also there’s the “roll-over” technique - that doesn’t work with fingertips. You can fret it with fingertips first but as soon as the roll-over happens you roll over to the fingerpad.

Another reason you curl your fingers is that later on there will be fretting techniques in which you can’t touch one of the higher (closer to the ground) strings because you would mute it.

Silly me, I didn’t read the original post closely enough… not enough coffee in me yet. I thought he was talking about the plucking hand, which is why I made my comment about fingernails making weird noises.

I changed my vote to “In Between” now that I know we’re talking about fretting. To me, there is no “One Way” to fret, it really depends on where you are on the fretboard, where you just came from, and where you are going next. I might use my fingertips one moment, and then on the next note cover it with my entire finger (for muting purposes). Also, if I’m going to a neighboring string on the same fret (G to C for example), I will use the rolling technique. A good example of this is when playing Billie Jean at 115 BPM, you have to play F# and then quickly drop to C#, which is the string below on the same fret. This is where rolling the finger really comes in handy.
So in actuality, there isn’t a choice in this poll that suits me to a tee, but I chose the one that comes the closest.

@Rich.B you may want to try a guitar glove. Worked wonders for mutilated fingertip’s
Jamie

I do both! It’s the Kobayashi-Maru answer

I need the option “Both”.
Pampurrs explained it best.

This was what I was meaning when referring to fingertip fretting (nails hidden when looking head on): 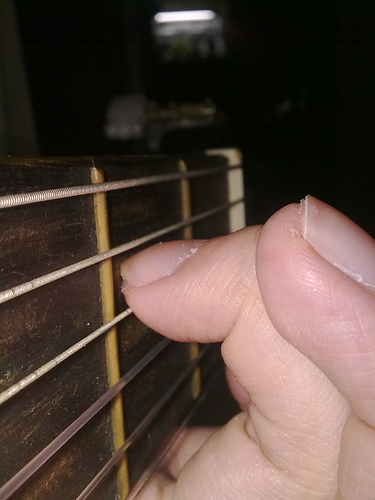 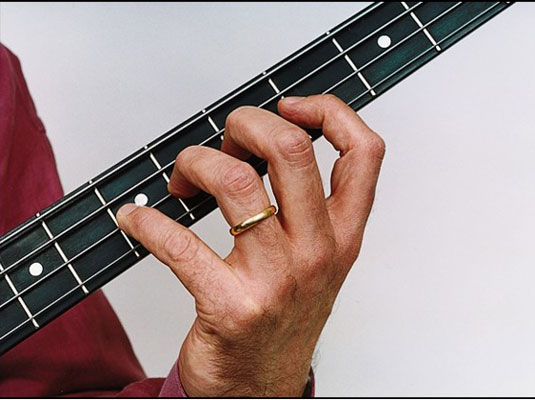 Vs a flatter fingerpad approach (nails visible when looking headon): 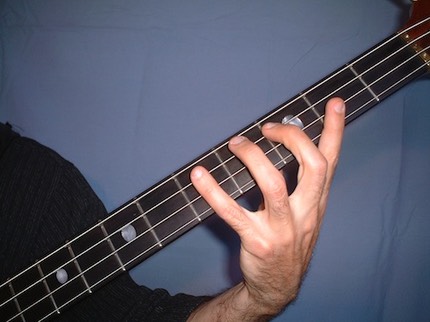 Sorry @Rich.B but I couldn’t answer the poll because I kinda use all kinds of styles and techniques when playing my bass. I kinda use all of them and maybe even a couple more that I’m not aware of when I’m playing. I guess it’s all about what ever sound result you’re looking to get, and for me, combinations of everything I can muster up at the time that works is what I’ll end up using…

A great survey question though… because,… I’ve never really thought about “how” I use my fretting fingers, I just “hear” how I use them…

There’s room for all three. I do all three all the time. One example would be for finger-rolls; the “flatter” approach works best there for me, even though it’s not usually recommended.

Thanks for the heads up so I have time to prepare snacks!

I think the main reason I was asking is its something I have real trouble with - I have bad enough RSI in my hands at the best of times and the fingertips are just the worse so was wondering how much of a bad habit pad-playing is or if it can hold you back.

Had to go pick up a bass and watch myself play for a few minutes to answer this and like most are saying I do all three.