Reaper and OBS and DAIs, oh my!

I’m starting to get myself setup to record video covers. I’ve tested something out, and it seems to work, but I thought I’d run it by the experts here to see if there’s something I’m missing or there’s some stupid beginners mistake I’m making.

My goal is to record my audio and video, into a single video, with as few steps and as little fuss as possible.

So here’s what I’ve got:

That created this video:

Right off, I can tell I’m going to need a better webcam. And I know the lighting sucks. But… the synchronization looks good, judging by my plucking hand. The plucks seem pretty right on with the notes I hear.

Don’t pay attention to my flubs, I was more concerned with monitoring the recording than the playing. Other than that, any thoughts, concerns, or feedback on this approach?

Looks and sounds good. I think you’re on the right track (pardon the pun). I use a GoPro as my main camera, and my android phone as my secondary camera. The android can produce some very impressive video.
P.S I’m not a fan of OBS for making cover videos. I think it’s strong suit is live feeds.

I think you’re on the right track (pardon the pun).

Pardon the pun? No way, celebrate the pun.

I’m not a fan of OBS for making cover videos. I think it’s strong suit is live feeds.

I get that, and I’ve heard that before. I have a buddy at work who swears by it, so he was able to give me some pointers, and it’s free, so I figured I’d give it a shot. Professionally I’m a software guy, so I’m looking for the easiest way out with decent results; the idea of wrangling a bunch of software to sync audio and video just fills me with… “blah”.

Thanks for the feedback, Pam!

A Logitech C310 is only a 720p cam IIRC. I’ve got several C920s and a 930e from my live-streaming efforts. I’ve learned that even those at 1080p cannot compare to a DSLR, GoPro, or newer iPhone camera. I would watch the CPU usage in OBS while you are doing the recording to see if that is an issue.

I’ve got a lot of experience with OBS, and the heavier Streamlabs version (wouldn’t recommend that flavor to ya), but as Pam had mentioned the program does excel at livestreams. I’m still using OBS since it’s familiar and I know my PC can handle multiple camera feeds at once. That’s not as applicable for creating cover videos, but I digress…

So, I think… I think that I could record the song in Reaper… adjust the bass eh, “in post” (I guess?) and apply effects, export it as an MP3, and then use that MP3 as an audio source in OBS.

That might work out a little bit better, as I wasn’t happy with the levels and tone in the straight-to-OBS recordings. Granted, I’d have to play the song, and then play along with it in OBS. That might be weird.

Not at all. I do just that. I record just in Reaper as two tracks (original backing minus the bass, and me playing) mix the tracks and set up the camera and record the video while “lip syncing” to the playback audio track. If time permits, I record multiple camera angles, edit and sync the audio.

This is actually using a DAW more like it should be used IMO.

I think that I could … export it as an MP3, and then use that MP3 as an audio source in OBS.

I don’t have to do that. I can just play it back from Reaper and use OBS “desktop audio” to catch it for the video. Hmm…

I use a GoPro as my main camera, and my android phone as my secondary camera. The android can produce some very impressive video.

I use my phone for a lot of marketing videos, the 4K video is great!

Your initial setup description seems fine to me - the few covers I’ve done have all been with OBS. Yes, it’s strength is “live streaming”, but I’m basically capturing my playing live, and saving that recording. But, I don’t do multi-angles, or fancy effects, or manipulate the bass track in post - I play the song, from start to finish, and viola, cover done.

(well, not counting the first 99 times I attempt to do that, and fail miserably)

If you’re interested in doing something fancier, then it’s possible that you may run into some limitations with a simple “record it all at once” setup…

I don’t have to do that. I can just play it back from Reaper and use OBS “desktop audio” to catch it for the video. Hmm…

This is an even better path. Just load the mp3 of the original song as an audio track in reaper. This has many advantages.

Even though I don’t use backing tracks, what I usually do when making a cover:

There you go. You now have a nice representation of the original song in the DAW as an audio track, lined up on the beats with the measures of the song correctly marked in the DAW. This is where our paths diverge; all I do with it is analyze it to add DAW markers on the correct measures for things like the bridge, chorus, etc so I have a map of the song when I record the other instruments. I then mute it until I need to listen for some more reference in analyzing the song, and eventually I delete it.

Instead, you’ll be recording a bass track with this playing as a backing track (and will be able to visibly see if you’re playing on the correct beats or not, etc.). Very convenient visual reference.

Here’s an example from one of my covers. You can see the muted reference track at the bottom, all lined up nicely with correct measure markers. I added a DAW marker you can see at the top there for when the bass comes in. Ignore the other tracks, they are other instruments that come in later, or muted spare takes. 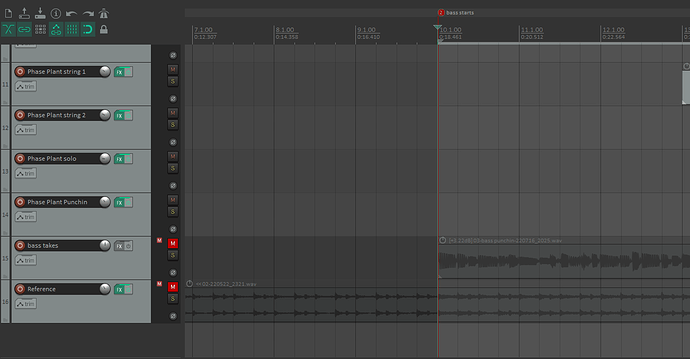