Mileage varies. I was not a fan at the time, or now. Despite recognizing the craft.

I would argue that you have found the difference between craft and art, but that’s splitting hairs

That’s probably accurate, though bridges can often be just a verse or verse chorus with a guitar solo over it instead of lyrics…still breaks the monotony of the song to a degree, it can also be a different part before returning to a chorus or verse.

I think pop is in a complete rut these days, just a couple exceptions. Most of the top 20 songs use the same 4 chords in the same order. You can lift the vocals off one track and drop it on the intrumentation of another, and it fits. Very cookie cutter these days. At least Western and Korean pop is. Japan is a bit more adventurous.

of the top 20 songs use the same 4 chords in the same order.

It’s interesting. When I just give into art, sometimes it can, in a way, make the song worse. Had a 9 minute song that had a bass solo, followed by guitar solo followed by keyboard solo. We liked it, and if we are playing live we do that version, but the studio version we cut out all but the guitar solo, got the song to just over 6 minutes (still a bit long, but the story told in it we just didn’t want to sacrifice and stuck to it regardless). But there is an “art” to doing that to a song too.

Right - my point being that the bridge doesn’t usually take a drastic turn like an interlude often can - it’s often a variation on one of the other existing song parts, etc. Whereas interludes tend to be longer and more different. Like, I have seen songs that change keys in interludes.

At this point I feel compelled to drop in The Manual 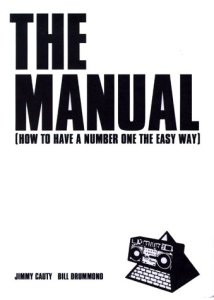 The Manual (How to Have a Number One the Easy Way) is a 1988 book by "The Timelords" (Jimmy Cauty and Bill Drummond), better known as The KLF. It is a step-by-step guide to achieving a No.1 single with no money or musical skills, and a case study of the duo's UK novelty pop No. 1 "Doctorin' the Tardis". The advice dispensed by The Manual includes: "Firstly, you must be skint and on the dole. Anybody with a proper job or tied up with full time education will not have the time to devote to see it ...

Holy crap The KLF were brilliant. As were the bands that read The Manual and repeated its success.

Totally agree. I,vi,iv,v I think is the progression or some variation of that. What varies are the overlaying melodies which create the “hooks”. But again this appeals more to the psychological affect of songs more than the technical ability. The cool thing is it is possible to apply the art side to the formula and still make a great song.

I might have to check that one out. The way I look at it is you can use this type of stuff as a tool. And if you do happen to make a hit, it will just drive people to your other songs!

Yeah, sometimes they are a complete deviation of the song. Now with memory serving me I think the addiction formula he doesn’t tend to recommend including interludes, as they aren’t common in modern music or among “hit” songs.

Tom Petty wrote 3 chord songs his whole career and made them sound fresh. Jeff Lynne is another. I agree you can make a great song by the formula, look at Billie Eilish; but you can also write a great pop song without it.

Also if you want to make a chorus pop, write a pre chorus instead of a bridge.

Very true on the prechorus. Big thing is there are always exceptions to the “rules”. Look at Bohemian Rhapsody!

If you don’t know the story of that - I highly recommend the read.

I should point out, as Drummond mentions immediately in The Manual, that it won’t work today. It was a humorous take on exactly the zeitgeist at the time, and how to work it to get a #1. And it literally worked, on at least two or three other songs that took the advice as inspiration. An illustration of '80s pop being formulaic schlock that it just took craft to crank out, not skill or art.

The KLF were one of the weirdest, most eclectic bands of all time, that would pump out what were simultaneously club hits and also deeply, deeply weird. And they paid the bills by charting songs occasionally. One of their albums (The White Room) is basically revered.

In the end as an art stunt they deleted their catalogue and burned a million quid on camera.

They used to go on Top of the Pops dressed as druids and performing rituals during the song. A total send-up of the music industry.

Bill Drummond and Jimmy Cauty - two of my heroes. Cauty went on to form one of the most influential electronica bands of all time, The Orb.

Japan is a bit more adventurous.

JPop is a mixed bag. On one hand, there’s all the idol *48s and all the icky fan culture around them. On the other hand, there’s people like Yasutaka Nakata and the bands he produces, which make really much, much more interesting stuff.

And of course the hybrid bands like GachaSpin that are all over the place, and the ridculously hard rocking metal side, including really, really popular Visual Kei bands that happen to rock harder and heavier than almost any western band outside of blackmetal. Because they basically are blackmetal/punkmetal, just very glamourous too.

As an aside, I thought it was interesting that Jack White said that “Seven Nation Army” was just an experiment in writing a song that didn’t have a chorus. I had never even noticed until I heard him say it…

Whoa, me either, very interesting!

With the short attention span of listeners now a days

Don’t get me going on Versailles or Dir En Grey lol.

But by adventerous I meant something like this which you don’t get anywhere else. Cool baseline helps Don’t get me going on Versailles or Dir En Grey lol.

I know, right? Like, even imagine that charting in the west.