Steps For Releasing Your Music

Hard road travelled, but I figure this advice will be good for any who are releasing their music, or if you plan to in the future. Here are some things to help you along, and really helped me.

Sign up for Distrokid. They are a distributor. They help you release your songs to EVERY platform (Spotify, iTunes, YouTube, Pandora etc…). They let you keep 100% of your royalties AND track all your streams across all platforms. One yearly fee for service, one payment per song (optional) when you upload it.

Get on Pandora and Next Big Sound. Free service, helps you both promote and track your songs on Pandora. You can feature a song when it qualifies, and every time we have we got 1,000s of streams. Updates each day. It has more analytics, but here is a general example and where we are today! 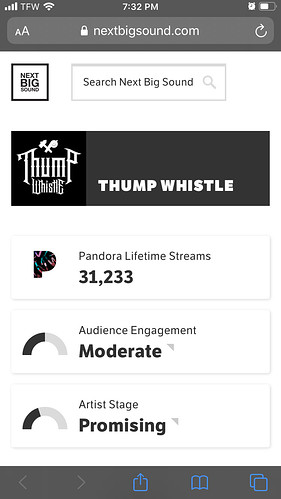 Pandora also has an algorithm that helps match your songs to other artists and get your son played on their radio stations .

To me it really is amazing how the industry has evolved. In the days of old, more often than not, songs became a hit by accident. “Sounds Of Silence” by Simon and Garfunkel was a flop, until a last ditch effort to electrify the sound was added and then college stations would play it all the time and it caught on.

“Rebel Rouser” by Duane Eddy was a B-Track and Dick Clark forgot to bring a complete set of jams, and the crowd kept wanting “Rebel Rouser”.

Nowadays, the industry is so different. For better or for worse.

Definitely for better. The democratization of music is leading to there being way more great music being released now than ever before.

As far as I can tell it’s only negative for the labels, which is why they fight it so hard.

Yup. And the days of hoping a record label picks you up isn’t the best path, nor are labels really good for artists.

I don’t disagree. Hearing and reading some of the stupid decisions record labels have made despite their artists protestations, I’ve never been on the side of corporate record labels.

My only concern is that there are so many tracks out there now, something really special and unique gets drowned out. Of course you can argue that something special finds a way to be heard no matter what.

I like the idea of all these home/micro studios putting out good music. The music industry played itself, and there are some home setups I’ve seen that bands in the 90’s would’ve had their eyes popped open looking at.

My bandmate and I talk about this all the time. Comparing the software now to what we had then, plus the modeling multieffectors, we are pretty blown away.

Yeah no kidding. Just using Reaper impresses the hell out of me. It’s basic, but has the ability to be very versatile.

Something I wanted as a kid was a local radio station to dedicate 1 hour during non-peak programming to let local bands submit tracks to play over the radio and get some brief air time. I wasn’t in a band, but I thought it was a great idea.

I learned later that FM radio stations are ‘locked in’ and can’t do anything like that. Which is a shame, because I thought it would be cool to have a local radio station play local music.

On a local level, I’ve decided to be more active in revitalizing the music scene around town, which is pretty much dead. I still work 70+ hours a week, donate time to a martial arts program, practice bass, socialize with my family. Somehow I’ll make more time, lol.

Yeah, it is amazing how the industry has evolved. I remember 20 years ago we were sending CDs to local radio to try and build some momentum and there wasn’t really anything about an online presence.

Here is Billy Corgan talking about this (only a couple min). It’s interesting to hear an industry vet talk about this change. He’s pretty blunt about the transition.

I was listening to an established artist interview discussing how the internet is a double edged sword. You can get stuff out there but the money is crap. Live music and merchandise has become vital so huge struggles currently due to lockdown

Some artists are running their own merch stores.

Yeah merch is part of it, but as far as exposure and building a following it is all streaming services and social media nowadays. People just listen to music differently than they used to. I’m old school too, still liked the idea of albums and labels, CDs etc…but entering into it learned that things changed.

Holy crap the software is just so good now.

We’re working on another cover and trying to figure out what was wrong because it sounded off.

It turns out I recorded the intro through the first verse a quarter step out of tune.

So I just copied it into a new track and fixed it in Melodyne. I don’t even think I am going to re-take it, it sounds perfect and blends nicely with the reast of the song, which is in tune. You literally can’t tell. 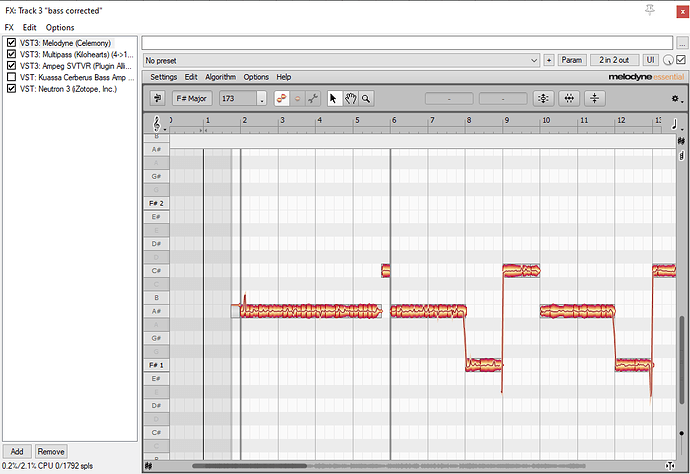 Of course I also only used it for shifting by a quarter step. Tempted to play with it and drag notes around to make different songs

As far as I can tell it’s only negative for the labels,

It’s really, really hard for artists.
The only feasible ways to make money as a performing, recording, touring band at the beginning/mid/genre level are in touring and merch.
It was doable and I don’t think most bands asked too many questions because the touring life has some lovely perks and if you’re willing to work and drive and play, you can, sometimes, make it work and pay your bills.

I think the lockdown has shown a spotlight on how wrong it is that people who make music that we all love aren’t getting compensated for that music in a way where they can sustain their music making. I really strongly believe that music should be paid for if it is being used/consumed. It seems like this has become voluntary, and I am hopeful that more people will volunteer to pay musicians.

You can get stuff out there but the money is crap. Live music and merchandise has become vital so huge struggles currently due to lockdown

So, yeah, basically this here.

I was in a touring band for 10 years. We worked on the road over 100 dates a year, sometimes up to 150. US, Canada and Australia. It was enough to survive as a thrifty roommate with few worldly possessions. In my last year on the road, we were still rotating out who had to sleep on the floor because we still couldn’t afford enough hotel beds for band and crew.
All our money came from touring and merch.
It would have been swell to make money for the music that people streamed - and we did, as much as a small band could.

When I quit the band, the perception of the band’s success vs my actual income was a shock to everyone. Mostly to bands who were up and coming and looked at us as a success. We were successful. But touring-band successful is 20-30K a year, if you have a great fan base, can headline your own tours, and work half the year on the road.

the perception of the band’s success vs my actual income was a shock to everyone.

What about the “Toast Machine” you were in with that female drummer, @Gio? I watched the video on that and was very impressed

Thanks @Jazzbass19.
That band had great momentum in the early 2000s.
The drummer happens to be an academy award winning special effects artist.
Her dream job is the one she has that supports her well, and that she is supremely gifted at.

Touring dive bars for ‘crowds’ of 5 people was not exciting for her, so that band never made it past the ‘our local town loves us’ phase of the operations.

The band I toured with is The Brothers Comatose. Folk/Americana/String band music. Great stuff - verrrrry different (and easier to book/tour/promote) than a massively loud 2 piece instrumental prog-rock outfit.

I make zero dollars every year from Toast Machine streams and plays.

when I was in korea with Air Force I was in a band that was playing dives outside the gate and base events occasionally getting hired for different bases and their on base clubs, or an occasional larger club in Seoul. We were all military members booked every weekend for three and half years and my favorite moments were at the end of the night when some drunk GI would take the time to stagger up and declare, “you guys were awesome, if you took it more serious, you could make it”. We would smile and thank them, everyone glad that they didn’t have to live on the $100 they might have cleared over the weekend.

The praise is awesome, and some of the best is from the drunken people! I never intended to make money from music, mostly I like other people to hear it and if they enjoy what we made that is great! Getting a following and having a larger audience is just more ears that get to hear what we made and that is worth more to me than any money made from it. Not that I’d turn it down! The goal is more to have more people hear it (at least for me) than to get rich or make a living. There are tools to get your music heard!