Summer of snorkeling and the new Baz Luhrmann Elvis movie

Hey everybody! Apologies for my lengthy absence. I went from 60 to 0 because of summer - beautiful, short, and precious in Atlantic Canada. Lots of north Atlantic snorkeling (the cost of scuba competes too much with bass), one and a half tours of the Cabot Trail, scallops and chips 'til they were coming out my pores - the good stuff. I’ll be trying to polish off the 2nd half of B2B in September/October, though warm September oceans may win out for a while yet…

Since y’all are music geeks too, anybody wanna talk about Baz Luhrmann’s new Elvis movie? Because, damn, did I ever enjoy it. (And I wouldn’t even consider myself an Elvis fan!) Saw it 6 days ago and still thinking about it. Rococo, extravagant, dramatic; willfully & joyfully anachronistic, moody, interpretive - moar, moar, moar. The 1st of 3 “acts” (1950s) was my favourite by far - the most hope, the most praise for Black artistic influences, the most distance from tragedy and premature death. The very first performance scene, in particular (the pink suit – ykwim if you’ve seen it) is an astonishing 3 minutes of moviemaking because of how prodigiously it overcomes the nostalgia, quaintness, and sepia tint that the story of early rock & roll has acquired over the years. The scene’s visual cues and musical flourishes do what a strictly documentary approach cannot: launch the viewer into the urgency and energy of that cultural moment. Exquisite. Not a movie without flaws, but when it’s good it’s very good. 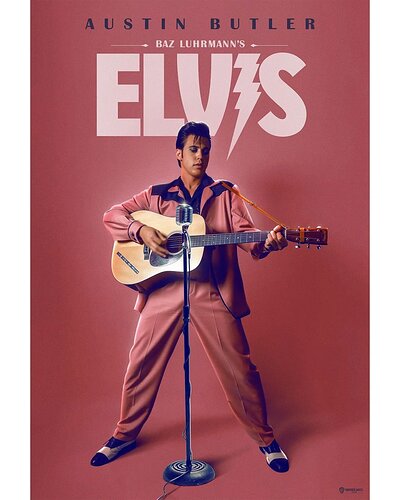 It’s next up in the queue. Thanks for the review.

Enjoy the water while you can.

Thanks! Let me know how you liked it.

You make it sound good. I’ll have to check it out.

Oh god, I hope I’m not overselling it!

Seriously, though, Austin Butler’s performance is mesmerizing and the whole thing is a visual and musical treat. It’s not for purists; it’s for music lovers who wanna be seduced.

Im good with that.

The musical performances are just brilliant. I’ll be rewatching for sure.

Thank you very much!

Yay!! I had to re-watch it 2 days later; there was just so much to take in. Do you have a favourite performance or scene? Or is that an impossible question at this point?

I’m going to change my mind and try to watch the Elvis movie, based on your glowing impression of it @cg_postbunk!, and Barney’s reaction. I hadn’t heard much about it before, and just thought I would skip it.

Glad you enjoyed your snorkeling summer!

I watched this film just two nights ago. Very well made, and the performance of Austin Butler was fantastic. But let’s not forget about the great performance of Tom Hanks as well. A little authentic film footage added near the end as well.

@andrewescude I was impressed to see Tom Hanks play a heel & pull it off - no easy feat for such a likeable actor known for his good guy protagonists. But the framing was irritating (Shut up, Colonel! Shut! Up!) Though I suppose that’s the point, eh? That suffocating control, the wall between the audience and the performer they really want to see.

Something I didn’t notice the first time through: Elvis standing in front of a sign at the fair for a “geek” show just before the Colonel signs him. I didn’t realize until reading up that “geek” shows involved exploiting an alcoholic or drug-addicted man who would perform grotesque acts in exchange for payment in booze or drugs. A sad little bit of dramatic irony / prophecy…

I only watched it because I’d seen one of the opening scenes in a meme. I was NOT prepared to be dazzled.

Do you have a favourite performance or scene?

I really enjoyed the early stuff showing just how incredibly exciting it must have been to have heard that stuff on the radio for the first time.
In fact I just spent the last two days learning ‘That’s Alright Mama and All Shook Up’ because they’re just so much fun to play.

I was walking the dog last night thinking that in less than 2 years; I’ve gone from no bass to listening to a record and playing along with it the same day. Eternally grateful to @JoshFossgreen for the fantastic grounding that his B2B course gave me.

I watched the Elvis movie last night and….daaaaaaaaammmmmmnnnnn.
So well done.
Another example of too big too fast, and these wacko people that surround someone who fights the inner torment and exhaustion/pain with drugs from doctors that should be in jail. Crazy to think of how many HUGE artists suffer the same fate.

What great music and greater visuals.
And for the first time ever I get to hate Tom Hanks, lol.

The early performances were my favourite part, too – Luhrmann and Butler absolutely SANDBLASTED those old nuggets.

Another example of too big too fast, and these wacko people that surround someone who fights the inner torment and exhaustion/pain with drugs from doctors that should be in jail. Crazy to think of how many HUGE artists suffer the same fate.

I hear you. Once the glow of enjoying the movie wore off, the rage set in. There are so many layers of exploitation to unpack (Black music/musicians facing segregation; a working class teenage boy/young man with no life experience or business savvy; his overwhelmed & gullible family…), and artists are still enduring the same treatment today, often with fatal consequences. Feels like we’ve learned nothing: the ever-expanding 27 club, Prince, MJ…

Rage indeed.
I literally wanted to go back in time and kick some of the white folks arses, lol.

@cg_postbunk, I loved Austin Butler in “Elvis”. His immersive performance as the King is absolutely dazzling.

And Kudos to Baz Luhrmann, who wrote, produced and directed this amazing carnival ride tribute of a film.

Absolutely a carnival ride - I’m glad Luhrmann leaned into that aspect of the story - makes it both seductive and compelling.