Last winter I was slogging through a rough patch, (going to culinary school and working full time), and I had no time to keep up with my music, but I saw a Carol Kay interview where she said, “just make sure you pick up your bass, and play for ten minutes every day, - no matter what”… So that is what I did.

No matter how tired I was, I would pick up my bass, and play for ten minutes before I crashed on the couch, dead asleep.

I pretty much only practiced two or three riffs: The Unison from Sir Duke, My Generation, and a riff I made up on my own. Just those three riffs, over and over for months on end. I wasn’t getting any better, but at least I wasn’t losing my callouses, and I was maintaining my hand strength.

Since I’ve begun my Bass to Badass journey, it has occurred to me that I have my strings set up way too high, and even though I love my Olympic White Fender Hecho En Mexico Precision Special Deluxe, the black pick guard bores me; so I’ve ordered a Red Tortoise Shell pickguard, and while I’m at it I want to get new strings!

I spent so much time practicing the bass solos from My Generation that I got pretty good at using a galloping three or four finger right hand technique, so I want to get the same strings that John Entwistle used: Roto Sound Swing RS66… But there are more than a half dozen variations of the Swing RS66… Which ones did “The Ox” use?

If you know the answer, let me know!

Also I think it would be fun to put up a John Entwistle Bored Bass Face Challenge:

Record yourself playing the solos from My Generation (or the whole song). With an emphasis on having a bored expression while you look up and to the right…

I think that would be hilarious, and educational – because Entwistle never played those solos the same way, and it would be cool to hear and see all the different variations of that iconic bass solo!

Anyway, once I figure out which strings to order, I’m taking my bass into the shop for a set up, and ask them to make the action “John Entwistle Low”…

I should get strap locks too, – any recommendations?

As far as strap locks, I have the Dunlap recessed strap lok system on both my basses.

I want to get the same strings that John Entwistle used: Roto Sound Swing RS66… But there are more than a half dozen variations of the Swing RS66… Which ones did “The Ox” use?

John Entwistle has always been my own inspiration.

Here’s a link which you may find interesting:
http://www.thewho.net/whotabs/gear/bass/bassmisc.html#strings

Great to hear from you Joe @Jazzbass19 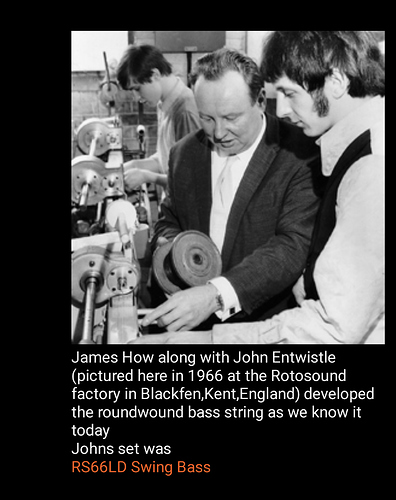 I’m taking the Bass to Badass course to fill in the gaps of my fundamentals, and then I plan on printing out Mark’s Sight Reading Courses, and grinding through those… and I figure, even if I don’t become adept at reading, I will at least have gained a thorough knowledge of the fret board, and a better sense of time…

Thanks for the strap lock tip !

having a bored expression

That’s actually one of the many things I loved about Entwistle, the way he just took care of his business (in a grand way), while Townsend was acting like a clown on the other side of the stage. The “bored” look on his face just told me he was too busy putting out awesome basslines to get involved in the silly antics of Pete and (sometimes) Roger.

I use the Dunlaps as well. Very happy with them.