The Time I Got A Bass Lesson from Bakithi Kumalo, The Bassist for Graceland / Paul Simon

In January, I got to go to Kala Ukulele (which happens to be headquartered in my town of Petaluma) and hang out with and take a bass lesson from Bakithi Kumalo - bassist on Paul Simon’s Graceland, and Paul Simon’s touring bassist for the last 20 years or so.
It was amazing.

There’s a teaser trailer video up on Kala’s site where you can get a taste of it. The full interview and lessons are reserved only for people who buy the new Bakithi Kumalo signature U-bass.
So, if that’s your jam, go for it!
If not, then just enjoy this moment with me, and the fully documented proof that I got to hang out and take a bass lesson with one of my all-time bass heroes. 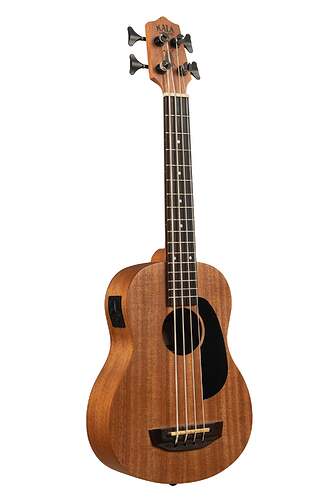 Bakithi Kumalo has been a proud endorsee of the Kala U•BASS® for over a decade. Longtime collaborator and bassist for...

Thats’ outstanding, Gio! Congrats! I would love to meet Bakithi. About 15 years ago, I did an interview and shop tour video with a luthier in Petaluma for my online magazine Acoustic Player Magazine.

I also had the privilege of witnessing Bakithi play with Paul Simon when they played Austin around that same time. Killer player.

Mondo cool!! What an experience!!

with a luthier in Petaluma for my online magazine Acoustic Player Magazine .

Cool -
What luthier was it?
I’ve met a few of them around town.

with a luthier in Petaluma for my online magazine Acoustic Player Magazine .

Cool -
What luthier was it?
I’ve met a few of them around town.

While on a Northern California leg of a nationwide production tour, I shot an interview with acoustic guitar luthiers: Bruce Sexauer in Petaluma, Eric Schoenberg in Tiburon, and Ed Claxton in Santa Cruz, to name a few.

Awesome! What a cool opportunity. Glad you were able to do that!

Man, that is ten kinds of cool.

WTF this is ridiculously cool.

Haven’t actually got to meet Bakithi for real, but his band was playing at Philly Folk Fest one of the years I played there with Tempest, and it was the 30th anniversary of Graceland. So on Sunday a bunch of different artists from the festival came up and did guest vocals on Graceland tracks with his band. Super cool.

He was also at Victor Wooten’s Bass and Nature Camp for a day when I went in 2019. I still remember this rad story he told about when he was first learning bass. He was too poor to buy one, so he would go to the music store over and over, trying to pretend he was going to buy something so he could practice bass there! If I remember correctly, the store owner eventually gave him the bass either free or super cheap, and I think that’s the bass he played on Graceland… might need a fact check on that, but cool story about perserverance eithe way.

I still remember this rad story he told about when he was first learning bass.

His stories - and the lengths he went through to play bass - are unbelievable.

The bass he recorded on in his early days was owned by the studio, so he could only play it when he was in the studio.
So he took a sheet of cardboard to the studio one day and made a cardboard cut out of the size and shape of the bass.
That’s what he would practice on when he was home. A cardboard bass with frets and strings drawn on.

“…if the bass is consistent, they know they can dance.”

It’s hard to overstate the importance and responsibility of this role.