Transcribed one verse of our anthem -- daaang!

April 27 is Koningsdag – our national holiday.
Usually, we all dress up in orange (@T_dub 's favourite colour), and roam the streets… but not this year.
The musicians from the Concertgebouw Orchestra thought it would be a good idea for everyone who plays an instrument to, in front of their house, play the National Anthem.

I don’t think many of them in our street will be participating, but I am prepared. As an exercise in sheet reading & writing in MuseScore, I transcribed it… (I have to say I used the examples provided by Rob Dirksen, contrabassist in the Concertgebouw Orchestra, as an example).

Dang, for someone who hasn’t been reading sheet music for 40 years, let alone writing it, that thing is HARD! 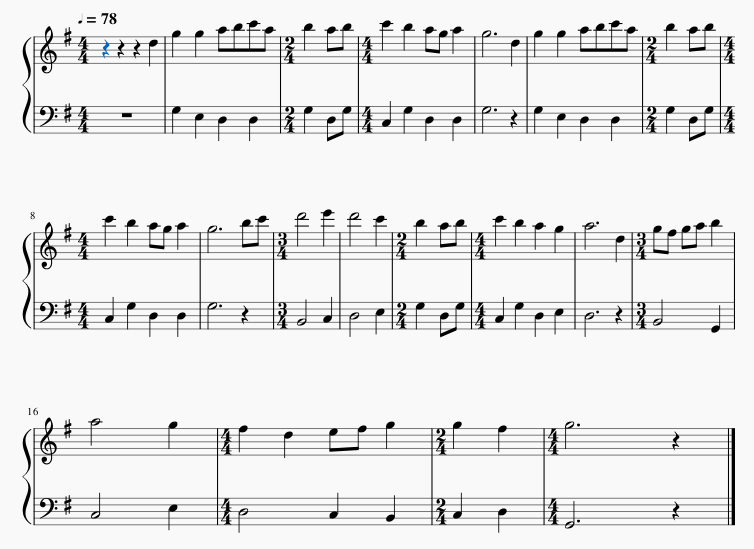 In honor of your National Anthem, and because the national color is “orange”, I will do what I can to learn it.
Hopefully by Monday👍🏻

The bass part, while harmonically interesting, is easy to play. It’ll be interesting to see what you do with the treble clef!

I just gave it a quick read on screen and played it in my head. It looks to be fairly simple. I’d love to hear it. Is the bass treble part normally played with a Tuba? It looks like it could be a nice Tuba piece.

It is often played as a piece for horns, so a tuba for the bass part would make sense.
This gives you the “bloasmuziek” rendition, and then an orchestral rendition.

It’s fairly simple to play, and it sounds accessible, but I guess it is is musically more complex than most anthems. Of all national anthems I’ve heard, this is the one with the most time shifts I know.

It’s now played slowly, but there is quite a bit of debate whether it was played a lot quicker when it was rearranged in the 17th century.

@peterhuppertz your anthem is truly beautiful. It brought a tear to my eye as I listened.

Is it my totally untrained ear, or are there similarities to the US anthem? O don’t mean anything other then, I felt I could sing the American national anthem to it in more then a few places.

This is why I ask, because my ear is more then a novice, completely beginner ear.

It wouldn’t surprise me at all if anthems were generally cut from the same cloth when it came to chord progressions and movements.

I’d also dare to say that this is the only national anthem I know that has 10 time shifts in 19 bars!

It was the time shifts and what happens on the bass clef that intrigued me to try and figure this one out.

I was not making a case that the Dutch anthem copied the American, almost quite the opposite, that the American was derived more from the Dutch, kinda the way @howard suggested.

Plus, I rather my anthem copy the Anthem of Orange, then any other anyway😉

I didn’t think you were.

I was mentioning the eras to illustrate that both melodies have been crafted in different times, and under different influences. But, as we will see later in this brief message

The original melody of the Wilhelmus (that’s the name of our anthem) is nicked from a French protest song that dates back to 1568 at the latest. In those days, it was a typical baroque melody, entirely in 4/4.
In the late 16th or early 17th century, the melody was decorated in a typical baroque style with melisma (the stretching of single syllables over a cluster of notes).
A rendition of the old version can be heard here:

The rendition above shows how the melody works in what is assumed its original tempo.
Adriaen Valerius slowed it down considerably, some say to make it fit to be sung in a church…
I don’t know when it was rearranged to its current melodic and rhythmic structure.

Stylistically, the orange anthem, originally a protest song against the Spanish at the start of the 80 year war, seems to be an outlier – according to Wikipedia, “The majority of national anthems are marches or hymns in style. The countries of Latin America, Central Asia, and Europe tend towards more ornate and operatic pieces, while those in the Middle East, Oceania, Africa, and the Caribbean use a more simplistic fanfare.”
Something that has always puzzled me is why the national anthems of many countries that have a vastly different musical tradition still seem to be firmly grounded in Western music. Bit of a missed opportunity, methinks.

The melody of the US national anthem was originally English: “The Anacreontic Song”, first referenced in 1773. allegedly composed by a chap called John Stafford Smith, an English musicologist and student of renaissance music… from roughly the same era as where the original version of the melody of the Dutch anthem dates back to. Which may explain the similarity.

Very interesting. Thank you for the excellent explanation