Just thinking out loud here, but why don’t bassists sell transcription books of their songs? I would so buy a book of Clash songs put out by Paul Simonon, or Bosstones book by Joe Gittleman, or an REM book by Mike Mills, etc, etc…

Seems like a simple side-line for any published bassist, yet I can’t think of 1 example of this. Why not? My best guess is sales numbers are too low to justify the effort. But hell, even if it wasn’t a published book, but a collection of sheet music that they sold out of their living room, I’d still pay them for it…

I dunno - like I said, just thinking out loud, and wishing there were more “legitimate” transcriptions available for songs I want to play.

Yeah. That would be cool.

It gets frustrating searching for some of the more obscure stuff I’d like to learn.

There are some, but from more ‘mainstream’ folks, but, not as many as there are in sax land for sure. Many though, they lend their name vs. them writing it out.
In sax land though, people sit and transcribe the work and collect and it and then sell it (legally of course), but this is heavily solo driven stuff.

I have books on Jamiroquai stuff, and Rocco Prestia/ToP, Jamerson, Duck Dunn.
I think a lot of times these guys aren’t writing as much as they are playing it and working it out, and would be a PITA for them to sit and write it.

The smaller stuff (bigger to you or I or others) won’t be worth the time vs. sales.

Which comes to that ever present, annoying answer…transcribe it by ear, the best way to learn (go ahead, big moan), it really is the way.

I pretty much gave up on trying to find scores for songs I want to learn, and just write my own basslines based on the chord charts (easily obtained on Chordify). I listen closely to the songs (after boosting the bass in RX8), and try to get as close to the original bassline as I can.
Yeah, it would be nice if more bass scores were available.

but why don’t bassists sell transcription books of their songs?

Conflict in the band, unless the bass player splits his profits with everybody in the band, cuz its the Band’s song. But wait, it is not, is it.
And that brings us to the label.
The label would probably charge them royalties to make the book, that he has to split with the rest of the band, so in the end, he, the bass player, after writing out an album of bass tabs, would pay for the album licensing fees and royalties, share whats left over with the band,
And in the end they get a slice of pizza and a beer for the work.

Not all musicians gave up the rights to their songs, and they could do it, but being the DIY type of PUNK attitude that had those musicians not looking for every dollar, didn’t have to be rich, just had to own what was theirs, and that was what ultimately made them happy. That guy, might say Go Figure it out yourself you Wanker!!!

Just a couple of ideas, in reality there are probably way more types and complications then I listed in just 2 examples.

That is, I am guessing, why lots of even the best books of transcription have mistakes and missing parts.
The book company asked the record company, and for a fee, they said yes, but you have to get one of your guys to do all the work, you can hear the songs, make the tabs / notation and sell it, under your book company and publisher, keep within copyright laws, and pay the fees and royalties (not to the ban members at this point, they get crap) and put it out, if its close enough, thats good enough for us.

Its all a shame, would love to get bass lines for Primus from Les, or Sabbath scores for NIB from Geezer, and many other songs and musicians.

Hey guys, I have a lot of stuff transcribed if your interested,
Reach out,
Cheers Brian

I have a lot of stuff transcribed

I’m thinking of sharing some of the ones I’ve transcribed as well. Unfortunately, my scores are not always the most professionally written, since I’m writing them mainly for my own use. Also, mine are all in musical notation only, and I know many of you like playing from tab.

I have a little white board with fret lines, and I use it to convert notation to tabs to play, which is helpful in learning the song itself.

Also helps when I have to figure out a key change

Hi Pam, @PamPurrs,
All mine are musical notation as well, not tabs, I should have mentioned that to👍,
Cheers Brian

I use it to convert notation to tabs

Funny! Whenever I’m stuck with a sheet that has only tab, I have to sit at my computer and convert it to notation so I can play it. To me, playing from tab is a major PIA.

Actually, I would love to get some of yours and Brian’s, for the purpose that @Wombat-metal said.
Any conversions are helpful. I can read the notes, but I can’t think on the fly where to play the fingers and get stuck if not starting from the right spot, or ending in the right spot to continue the next part.
No hurry, but if ever they get posted, or sent, I will be sure to work on them.

I can transcribe to tab, I should post a list of the songs I have👍
Cheers Brian

That actually puts the pressure on me to do a better job of writing my baselines. The ones I’ve done are rather sloppy since I only made them for my own use, and didn’t mean for them to be communicated to others as music sheets are meant to do. Sort of like a sketched design for a project as opposed to a blueprint.
I’m working on my next cover video and will share my baseline after I post it.

I’m certainly willing to transcribe myself, but a list would be great… Thanks!

I will put together a list, it may take a week or two

That actually puts the pressure on me to do a better job of writing my baselines.

Yeah, no rush. IF you just start moving forward writing them out neater, or even downloading MUSICSCORE (or Musiscore?), and creating them that way (it is free and pretty easy to use. When I first heard of it, I downloaded it and wrote out a song I had just learned for practice.)
Also, I am in no hurry Pam or Brian @TNKA36, just something for future work. Brian, I would like to transcribe to tab myself, kind of the purpose, so for me, I would just take your notation. If others want tab, they can ask you, or wait for me to turn it to tab and share it, either way.

Also, since I have your attention. LOL, I was watching a documentary on early punk rock, in New York and London mostly. Of course CBGB’s was in it, and of course if CBGB’s is in something, the Talking Heads are in with it.
I was watching very early performances of Psycho Thriller (and also saw something else more recent) and realized that Tina plays with her thumb. Not a pick and not alternating fingers, but her thumb. All the way thru I think, I didn’t see her playing the crazier ending part, but all the other parts, was her thumb.

IF you just start moving forward writing them out neater, or even downloading MUSICSCORE

It’s not a matter of neatness. My basslines are extremely neat. I don’t care much for MusicScore (I’ve tried it). I use a software called Crescendo which creates extremely neat scores.
What I meant was, I use a lot of shortcuts and little notations that only I can understand, since I’m writing them for my use only.
Here’s an example 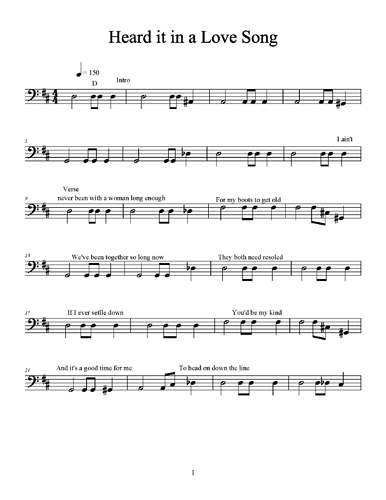 Yeah, that is beautiful.
I didn’t see anything out of the ordinary on this example, but I am not highly skilled with notation. That is part of why I want to do the work, to help with my reading of notation, and when sight reading have a better idea of where on the neck to play.
Did you have any of your personal shortcuts in this example? If you did, I did not notice them.

Did you have any of your personal shortcuts in this example?

I think the only thing on this example is that I put the sharp sign on the Cs which is unnecessary since it’s in the Key of D. I tend to do that for myself so when playing I don’t forget which notes are supposed to be sharpened. I know in the key of D that the Fs and Cs are supposed to be sharp, and don’t have to note that in the score.
I guess I’m just being too harsh on myself.

Yeah, stop beating yourself up.

Actually, I would probably do the same, cuz although I know the sharps in major keys, I can’t think of them on the fly and / or would probably forget when playing. I think that would help me more than hinder me.